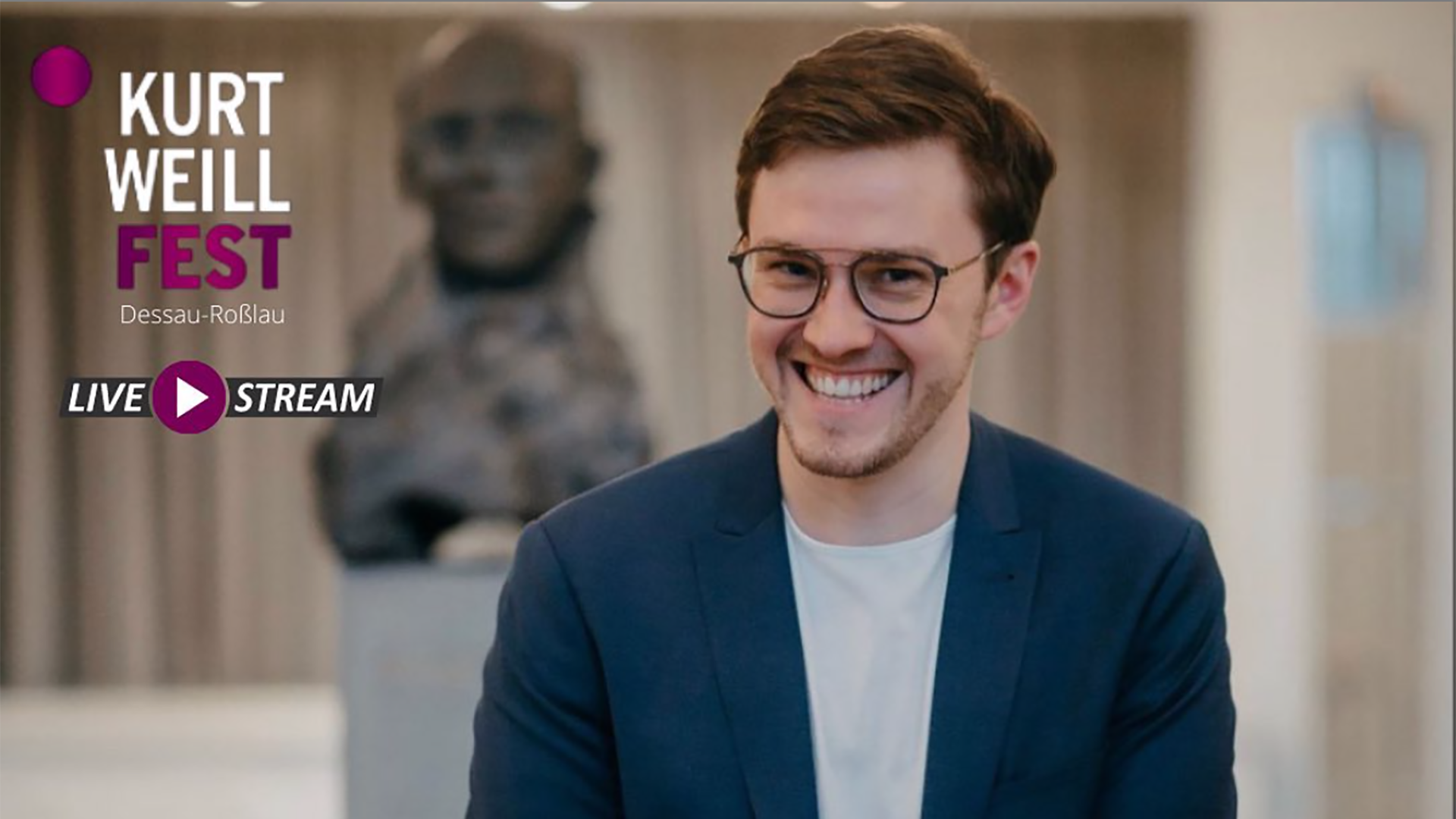 Frank Dupree is Artist-in-Residence for the 2021 Kurt Weill Festival. Due to COVID-19 restrictions, the first part of the festival, from 26 February – 2 March, will be available to

Frank Dupree is Artist-in-Residence for the 2021 Kurt Weill Festival. Due to COVID-19 restrictions, the first part of the festival, from 26 February – 2 March, will be available to watch online. The programme for the Festival’s Part II, which runs from 27 August – 5 September, will be announced in the summer.

Home is the theme for this year’s Festival, and Dupree explores different aspects of the term for his concert, titled “Near and Far”. Joined by his friend, the trumpeter Simon Höfele, the concert will be streamed from the Bauhaus Dessau on 27 February, and features music by Weill, Hindemith and Antheil.

“The 17-year-old Weill wrote his only work for solo piano in Dessau. The five-minute intermezzo, first performed in 1999, will open the concert. Despite its late romantic influences, one will hear the later intonation that is typical of Weill’s work. “The Slow Fox” and “Algi Song” from 1921 illustrate Weill’s carefree use of popular music motifs in his signature, sophisticated style.

“Paul Hindemiths’ Sonata for Trumpet and Piano is part of a series of 26 sonatas for all possible instruments. Like Weill, he emigrated to the US in 1940, and the two collaborated on the Brecht didactic play, The Lindberghflug, which premiered in Baden-Baden in 1929.

“George Antheil subtitles his Second Piano Sonata “The Airplane”. The work has little in common with the classical sonata form, but enthusiastically incorporates percussive elements and ostinati. America, is an influence in Antheil’s Trumpet Sonata, composed a year after Weill’s death in 1951. The piece combines German composition tradition with the sound of Gershwin, to whom the brilliant finale of the concert is dedicated.”

Initially trained as a jazz percussionist, Frank celebrates the breadth and depth of the piano repertoire, with a particular enthusiasm for the music of the 20th century as well as the music of living composers, having already been chosen to work closely with Péter Eötvös (Erdenklavier – Himmelklavier, world premiere recording in 2015 for the GENUIN classics label) and Wolfgang Rihm (Con Piano? Certo!, world premiere performance with conductor Justin Brown and the Badische Staatskapelle Karlsruhe in June 2015).

Recent and forthcoming highlights include debuts with the Royal Northern Sinfonia, Trondheim Symfonieorchester and Sinfonieorcheser Liechtenstein, return invitations at London’s Wigmore Hall, Berlin’s Konzerthaus, Brussels BOZAR amongst others as well as ongoing relationships with the Stuttgart Philharmoniker and Theater Plauen-Zwickau. Additional highlights include a collaboration with the Repercussion ensemble at the Cologne Philharmonie, debuts with the Frankfurt Radio Symphony, Ulster Orchestra, recitals at the Heidelberg Spring Festival, Lucerne Festival, London’s LSO St Luke’s, Hamburg’s Elbphilharmonie, and Munich’s Allerheiligen-Hofkirche.