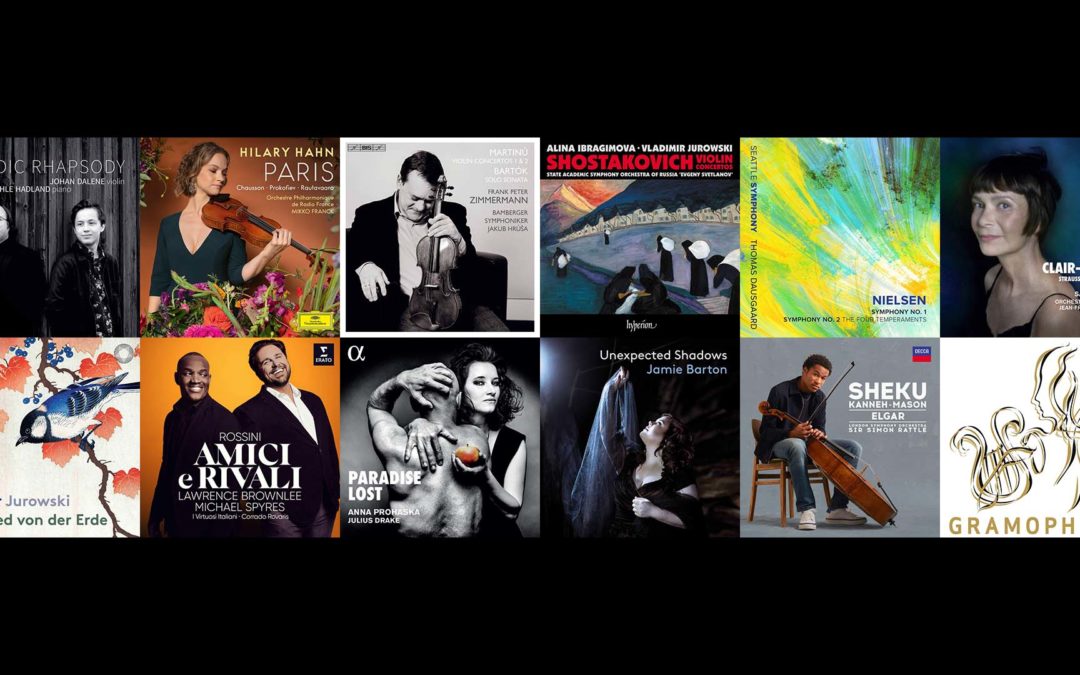 The 2021 Gramophone Awards Shortlist is announced, and IMG Artists congratulates our nominees for their extraordinary performances and recordings. This year, the awards will be announced in an online ceremony presented by pianist Isata Kanneh-Mason and Gramophone Editor-in-Chief James Jolly on 5 October. The ceremony will be live-streamed on Medici TV and Gramophone’s social media channels.

“Artistry of a high order from this gifted young Swedish virtuoso, and further proof that his dazzling debut album pairing the Barber and Tchaikovsky Concertos (2/20) was no flash in the pan. Indeed, Johan Dalene’s playing possesses such palpable maturity, intelligence and composure that even a (dare I say it) hoary staple of the violin repertoire such as Sinding’s Suite in A minor sounds positively newly minted, its Adagio centrepiece shaped with conspicuous eloquence. It’s a similar tale with Grieg’s adorable First Sonata, in which Dalene forges a nourishing rapport with Christian Ihle Hadland (whose contribution is intensely sympathetic and deftly poised throughout). Come the dashing Allegro molto vivace finale, these newcomers elect to ignore the repeat – but it matters little in the context of a reading so brimful of freshfaced ardour and recreative flair. …A release to relish.” – Andrew Achenbach (May 2021)

“I doubt whether the score has ever been played ‘better’ than it is here. …Few demonstrate Hahn’s grip on the argument. Never have I heard the quickfire second movement dispatched with such focused intensity. There are no unnatural gear changes, no tendency to race, rather a steely determination to differentiate between sul ponticello and con sordino reiterations of the same material, to articulate every single note, however fleeting. The performance is good enough to have one constantly reassessing firm favourites. …Fans will already have marked this one down as a compulsory purchase and likely Awards contender. They’re not wrong.” – David Gutman (March 2021)

[Bamberg’s] chief conductor Jakub Hrůša (together they were awarded the 2020 Bavarian State Prize for Music) is also principal guest conductor of the Czech Philharmonic Orchestra and as fine a Martinů interpreter as anyone on the podium currently.” – Guy Rickards (January 2021)

“If there’s one factor above all that sets these performances apart it’s the osmosis between soloist and conductor. There’s a musical and intellectual friction going on here and it has to do with the balance between head and heart. …The Second Concerto is a much more personal (indeed individual) statement and one in which the words ‘in confidence’ are repeatedly called to mind. Its three cadenzas are essentially conversations with self and even the relationship with the orchestra is different, with the soloist seeming to ‘commune’ with it collectively and individually. Her dialogue with the bassoon – Shostakovich’s instrument of choice for solitude – has the feeling of being ‘overheard’ and that’s as much to Ibragimova and Jurowski’s “credit as the composer’s.” – Edward Seckerson (July 2020)

“Nielsen’s early symphonies aren’t just well-kept secrets; they are essential listening for anyone serious about understanding the composer’s place in 20th-century music. …the whoops and cheers you hear at the end of this live performance from Seattle aren’t rooted in musicological analysis. They are startled, delighted reactions to the sense of energy, rupture and chaos that punch out of the music – that would infiltrate the composer’s betterknown later symphonies but are even more striking here for their almost Mendelssohnian context.…Playing it safe in Nielsen’s music is an interpretative non-starter but that doesn’t preclude care and preparation. Here, the … sheer speed. The results are startling. Tempos are so often irrelevant in the context of overall footing, phrasing and balance but here Dausgaard’s are up to 20 per cent faster than those chosen by Oramo in Stockholm and Gilbert in New York. …Speed requires confidence, and you can feel the Seattle Symphony’s building with this further exploration of what remains an alien aesthetic to so many orchestras. …[Dausgaard’s] performance of The Four Temperaments is the real winner here. …Fresh, fascinating but not uncontroversial accounts, which is just what this neglected early Nielsen needs.” – Andrew Mellor (November 2020)

“An inspired piece of programming it is. Piau’s voice is light and deftly controlled, and it’s matched beautifully by dappled orchestral accompaniment from the Besançon-based Orchestre ‘Victor Hugo’ and conductor Jean-François Verdier – certainly more ‘clair’ than ‘obscur’. Don’t expect the full glare of autumnal sunlight in this ‘Im Abendrot’ or high-tensile dissonance in the Berg. Instead, against a controlled orchestral canvas, Piau imbues everything with a tender humanity. …Another beguiling album from this superb artist. Highly recommended.” – Hugo Shirley (May 2021)

“This is a performance of such distinction that regardless of one’s personal view of the piece – that is, exactly how objective or subjective you want or need your Mahler to be, and whether you favour an alto or baritone voice – it must be considered a prime contender for anyone’s library. …Clearly Jurowski is of the opinion…that given the symphonic nature of the piece, the solo voices – ie the singers – are an integral part of the orchestral texture and in evershifting dialogues with their ‘instrumental’ counterparts. So the singing voices aren’t soloistically spotlit but rather subsumed into the orchestral sound, so we get a wonderfully subtle interplay between the many ‘voices’ in this aural canvas, with Jurowski illuminating the texture from within, as it were, with all the finesse required of a seasoned watercolourist. …I cannot stress enough how effectively Jurowski conveys the ethereal ‘natural world’ beauty of the score. …Outstanding artists individually and collectively.” – Edward Seckerson (September 2020)

“…Excellent album. …Brownlee’s tenor fits the Giovanni David mould, light and flexible with glistening brilliance in his upper register. …In fencing terms, Brownlee is the foil to Spyres’s épée. They spar thrillingly in the Otello-Rodrigo duet (Otello) and as the Christian knight Ricciardo feigning friendship with King Agorante (Ricciardo e Zoraide). In Le siège de Corinthe (Rossini’s French rewrite of Maometto II), Spyres sings Cléomène, switching from Néocles in the complete opera for Naxos, allowing Brownlee the only aria proper on the album, a fervent ‘Grand Dieu, faut-il qu’un peuple’. …this is a must-have album for discerning fans of vocal fireworks.” – Mark Pullinger (January 2021)

“As one might expect from its Miltonic title, Anna Prohaska and Julius Drake’s ‘Paradise Lost’ takes the Biblical narrative of the fall of man and the expulsion from Eden as its starting point. …It also allows Prohaska and Drake to explore an uncommonly wide stylistic range, from Purcell to Reimann at his most pointillistic, embracing the bravura coloratura of the Fire’s aria from Ravel’s L’enfant et les sortilèges and the agitprop anger of Brecht and Eisler at their most trenchant. …The Messiaen, in particular, draws a virtuoso display of tone colour from Drake. …He, characteristically, is exemplary throughout, beautifully expressive and always alert to the subtle shifts of meaning of each song. …Very fine and infinitely rewarding.” – Tim Ashley (July 2020)

“‘Warrior I’ is thrillingly heroic, the Hebraic floridity of the vocal line finding rel kinship with the solo cello (Matt Haimovitz), whose beautiful transition into the ‘other’ realm of ‘The Slow Seconds’ is one of those moemnts in text-setting when no workds are necessary; just reflection.” – Edward Seckerson (Awards Issues 2020)

“Kanneh-Mason’s recording shines resplendent. …The Concerto’s opening immediately commands attention, and when Kanneh-Mason climbs the scale that peaks with Elgar’s first big tutti, his crying projection truly tugs at the heart-strings. The Scherzo suggests playful badinage, the Adagio a private prayer for solace rather than a candid confession (and how beautiful the hushed bars near its close); and when, in the finale, at the più lento section, Elgar’s meaningfully modulating themes suggest a sequence of unanswerable questions, there’s never a hint of overstatement. …It really is a remarkable performance, one that has already given me enormous pleasure.” – Rob Cowan (February 2020)