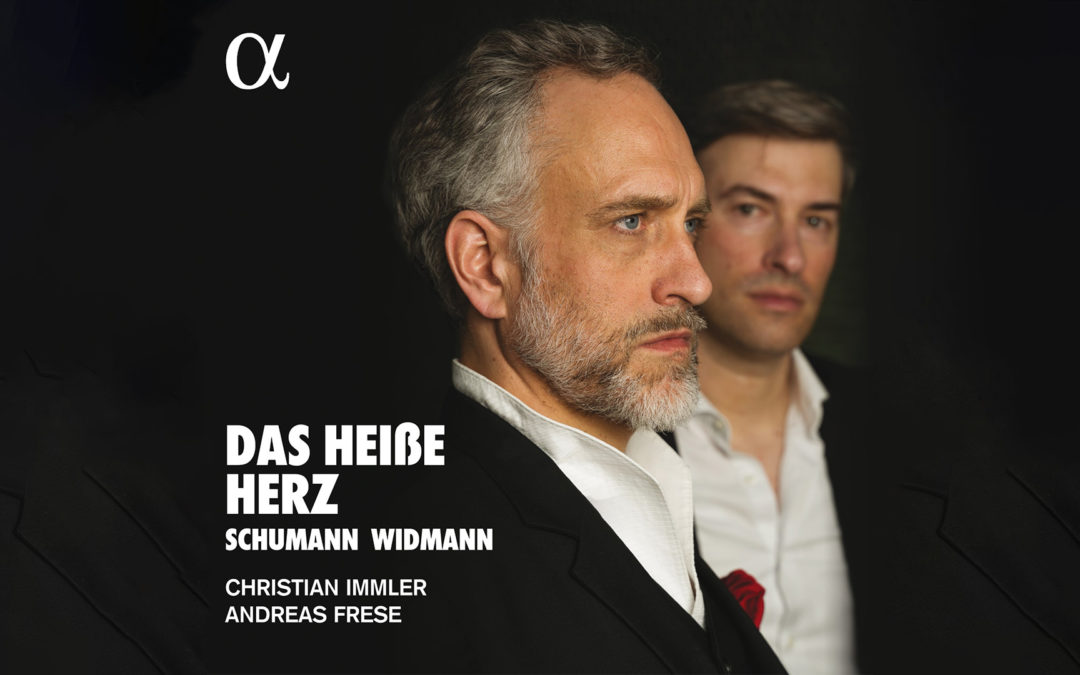 Discussing the release, Immler noted, “Schumann and Widmann enrich each other and give us, as performers, the almost childlike joy of being able to embody different characters and thus open up to the public directly, not without humor and theatricality. Widmann’s perfectly chiseled characters in the score (“jazzy”, “falsetto”, “spectrally bland”, “almost screaming” or “sung through the teeth” markings) make the interpretation obvious and natural, and its listening accessible and clear for the public.”

The recording, released last month, has had critics reaching for superlatives:

“Immler and Frese ‘speak’ directly to the heart, expressively and sublimely balanced, each song interpreted musically from exclusively the poetic core. This album allows us to enjoy two great interpreters who, like true chameleons, take us by the hand and lead us through this song panorama filled with great expressive reliefs, full of contrasts. There is so much enchantment, affection, alienation and musical-semantic beauty to admire that it almost makes you dizzy.” – Aart van der Wal, Opus Klassiek

“Widmann manages to weave such stylistic variety together with immense skill, creating a 40-minute cycle that is cohesive and compelling. It’s a fine work, then, and one that receives superb advocacy from Christian Immler and Andreas Frese. The baritone offers steady, handsome tone and pinpoint intonation as well as plenty of interpretative flair, while the pianist rises impressively to the varied challenges Widmann throws at him. The pair are excellent, too, in the late Schumann that opens the album, where Immler is authoritative and naturally communicative. Highly recommended.” – Hugo Shirley, Gramophone

“The selections from Schumann’s Harper and Lenau cycles here are beautifully done, with Immler’s pleasingly dry timbre and sincerity of delivery proving especially moving in the more introspective songs – but the chief attraction is the title-work by Jörg Widmann, inventive and accessible in equal measure and harking back to works like Dichterliebe whilst throwing Sprechstimme, jazz and cabaret into the mix. It’s hard to disagree with Immler’s assessment of it as ‘among the very greatest song cycles, and not just among those of this century’.” – Katherine Cooper, Presto Music

“A great interpreter of lieder, but also magnificent in the cantatas of Bach and the oratorios of Handel and very active on the concert scene, Christian Immler has developed a virtuosic and singular artistic personality. […] If the grave yet silky timbre of Immler’s voice seduces right from the first second, it’s even more his legato that astounds, whatever the style of vocal writing.” – Alexandra Genin, Classica ‘CHOC’

“Excellence in lieder and Intelligence in original programming: these two traits of Christian Immler are confirmed here. The singer and his pianist rise to the multiple demands of the writing without ever losing direction: rarified sonorities, long lyrical phrases lyricism, great mobility and a spectrum from parlando to the rawness of shouting […] This amazing music finds here the two interpreters providing from start to finish a sense of poetic evidence. Masterful? Essential!” – Jean-Philippe Grosperrin, DIAPASON

With a voice of “warm, noble timbre and great flexibility” (Forum Opéra), German bass-baritone Christian Immler is a multifaceted artist whose career ranges widely across the worlds of lieder, oratorio and opera, “a technically, musically and stylistically consummate interpreter, with a strikingly masculine, truly grounded bass capable of tenoral splendour, exemplary diction and emotional urgency coupled with a deep intellectual textual understanding.” (Klassik Heute) His artistry is strongly centred in the baroque and early Classical repertoire, but with a versatility that extends through the 19th century recital and orchestral tradition and into contemporary works.

Recent and upcoming highlights included Rocco in Beethoven’s Leonore and the Hermit in Weber’s Der Freischutz with René Jacobs and the Freiburger Barockorchester, widely acclaimed recordings of the St Matthew and St John Passions (as Jesus) with Bach Collegium Japan for BIS Records, the cantatas of Bach, Werner and Albrechtsberger at Müpa Budapest, Mahler’s Symphony No.8 with the Minnesota Orchestra, Haydn’s Stabat Mater and Salve Regina with the Kammerorchester Basel, Telemann’s Orpheus with the B’Rock Orchestra, the Musiklehrer in Ariadne auf Naxos in Luxembourg, and Don Fernando in Fidelio at the Opéra Comique in Paris.

Watch: Recording session from the making of Das heiße Herz