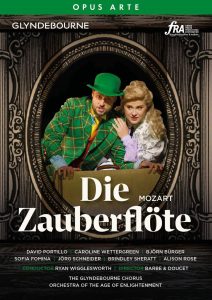 Opus Arte writes: “One of Mozart’s most enchanting works, Die Zauberflöte is a fairy tale that uses familiar archetypes to ask provocative and difficult questions about religion, the nature of power, the bonds of family, and of course love. Premiered just months before Mozart’s death, Die Zauberflöte in many ways represents a new departure for the composer. Catching the spirit of revolution in the air, Mozart turned his attention for the first time from court opera to popular opera, writing this singspiel (‘sung-play’) for a new and much broader audience. Ryan Wigglesworth conducts an outstanding cast including Russian soprano Sofia Fomina as Pamina, David Portillo as her beloved Tamino, Brindley Sherratt as Sarastro, and the ebullient Björn Bürger as Papageno.”