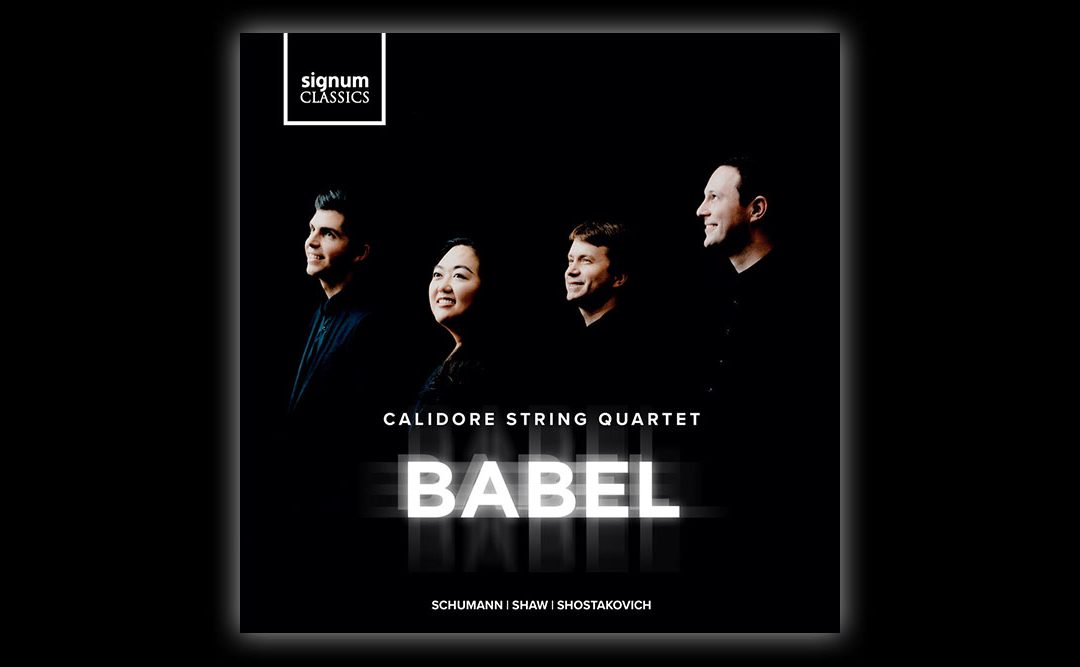 The acclaimed Calidore String Quartet’s new album Babel is available in stores and online now on Signum Records. The album features Pulitzer Prize-winning composer Caroline Shaw’s Three Essays, which were written for the ensemble and premiered at the 2018 BBC Proms; Robert Schumann’s String Quartet No. 3, Op. 41, written for his future wife the composer Clara (née Wieck); and Dmitri Shostakovich’s String Quartet No. 9 in E-Flat Major, Op. 117. The Quartet gathered music which transmits ideas by imitating language; its rhythms, cadences and intentions. But it also explores what happens when music substitutes for language. When it fills the void of forbidden speech or even how it carries on when language has been exhausted.

“There’s a joyful freshness and exuberance co the Schumann Third Quartet…with a surprisingly soft­edged opening movement that nonetheless never lacks character, and just the right skittishness to the second movement’s never-settling rhythms. The Calidore players are expert, too, at capturing the ambivalence in Shostakovich’s Ninth Quartet (in which the composer expresses semi-concealed solidarity with persecuted Jews), finely balancing its perky extroversion and its brooding menace so that we’re never sure which comes out on top.

“Most breathtaking amid a universally impressive disc, however, are the Three Essays by the Calidore’s fellow New Yorker Caroline Shaw, which employ music to symbolise and question political misuses of language. With its poppy syncopations, its uncompromising complexity and its thrilling immediacy, it’s a remarkable work that makes a virtue of its chameleon styles. …It’s hard to imagine a more vivid, committed performance, and one chat looks deep inside the music to the themes it expresses. Recorded sound is vivid and warm, with the four players placed beautifully within the sonic space.”

The Calidore String Quartet has been praised by The New York Times for its “deep reserves of virtuosity and irrepressible dramatic instinct” and the Los Angeles Times for its balance of “intellect and expression.” Recipient of a 2018 Avery Fisher Career Grant and a 2017 Lincoln Center Award for Emerging Artists, the Calidore String Quartet first made international headlines as winner of the inaugural $100,000 Grand Prize of the 2016 M-Prize Chamber Arts Competition. The quartet was the first North American ensemble to win the Borletti-Buitoni Trust Fellowship, a BBC Radio 3 New Generation Artist, and is currently in residence with the Chamber Music Society of Lincoln Center’s Bowers Program (formerly CMS Two).