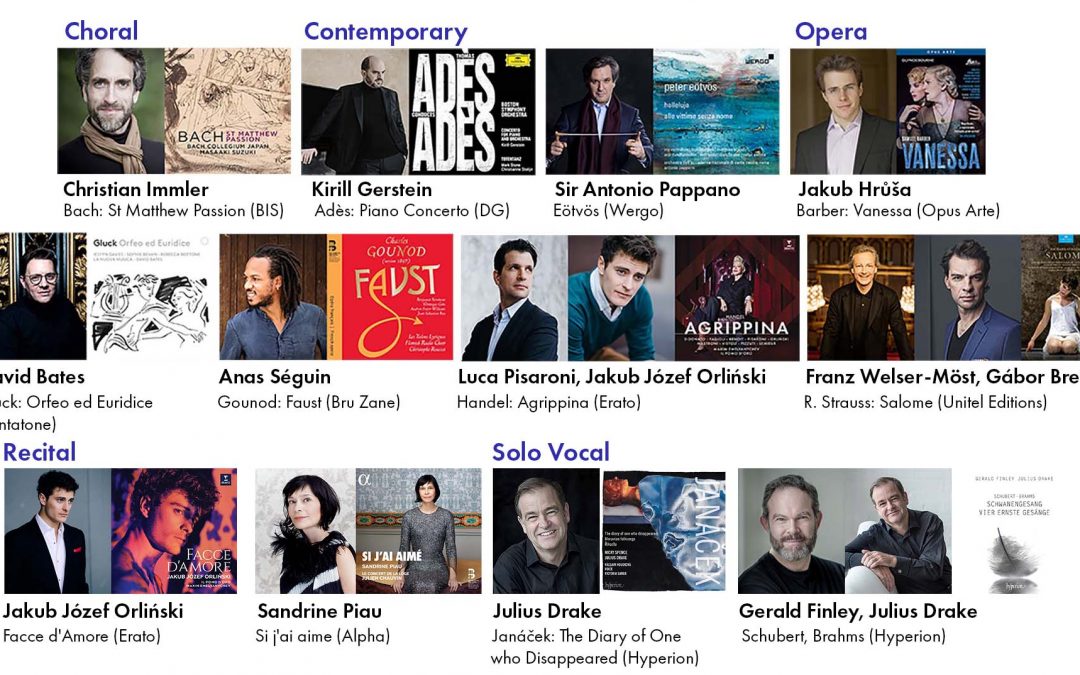 Congratulations to our 2020 Gramophone Awards Shortlist artists. The winners will be announced on 6 October in a ceremony streamed on Medici TV and the magazine’s social media channels. Read about each of the nominated album in Gramophone’s special Shortlist digital magazine.

“… the switches between human frailty and febrile physicality of Christian Immler’s Jesus and [Conductor Masaaki] Suzuki’s winning attribute of giving the music air and momentum at the same time.” – Jonathan Freeman-Attwood

“Gerstein and the Boston Symphony pull the piano concerto off with flair.” – Andrew Mellor

“Whether due to the urgency of Eötvös’ expressive intent, his attaining ever greater compositional refinement or the more approachable idiom, Alla vittime is the most affecting and impressive work of his that I have heard. It is brilliantly rendered here by Pappano and the Santa Cecilia Orchestra. Very strongly recommended.” – Guy Rickards

“But it’s all of a piece, no question, and thanks to Warner’s perception and motivation this excellent cast really deliver. As do Glyndebourne’s resident London Philharmonic under the dynamic young Czech Jakub Hrůša. Shadowy, opulent, effulgent – Barber’s Vanessa is the opera that bridges Hollywood and the Broadway stage.” – Edward Seckerson

“High praise, then, for David Bates and his ensemble. This is a serious rival to the excellent Sony recording conducted by Frieder Bernius.” – Richard Lawrence

“This release is a cause for celebration.” – Hugo Shirley

“As Nero’s temperamental opposite Otho, Jakub Józef Orliński sings with rounded tone and a sure feeling for Handelian line, whether in his hushed, inward account of the great lament ‘Voi che udite’ or in the exquisite ‘Vaghe fonte’, with its gently purling recorders.”

“Luca Pisaroni uses the subterranean depths of his bass to good effect as the faintly absurd Emperor Claudius.” – Richard Wigmore

“Gramophone’s new Young Artist of the Year steps firmly into the world of the secular with a love-themed recital of arias by composers ranging from Cavalli to Hasse…and once again it’s a winner.” – Alexandra Coghlan

“With her silvery tone, immaculate sense of line and telling if understated way workds, Piau is very much at home in this repertory. …It’s a most engaging disc.” – Tim Ashley

Julius Drake for Janáček: The Diary of One who Disappeared (Hyperion)

“The tenor is brilliantly supported throughout by Julius Drake, who is ever alert to Janáček’s piano-writing – delicate and piercing by turns – and conjures up the cycle’s sound world superbly from the start: an uncanny place of beautiful strangeness, quietly miraculous nature, churning emotions and dreamlike encounters.” – Hugo Shirley

“Gerald Finley is never an artist, one feels, to let himself be rushed, allowing his interpretations to mellow and mature in their own good time. It’s been five years since his superbly eloquent and refined Winterreise with Julius Drake (4/14) and his new recording of Schwanengesang – similarly eloquent and refined – is well worth the wait. Throw in the weighty coupling of Brahms’s own Lieder swansong and the result is a richly satisfying, moving album. …and he and Drake fully embrace the opportunities of performing the songs in their lower, broodier keys.” – Hugo Shirley