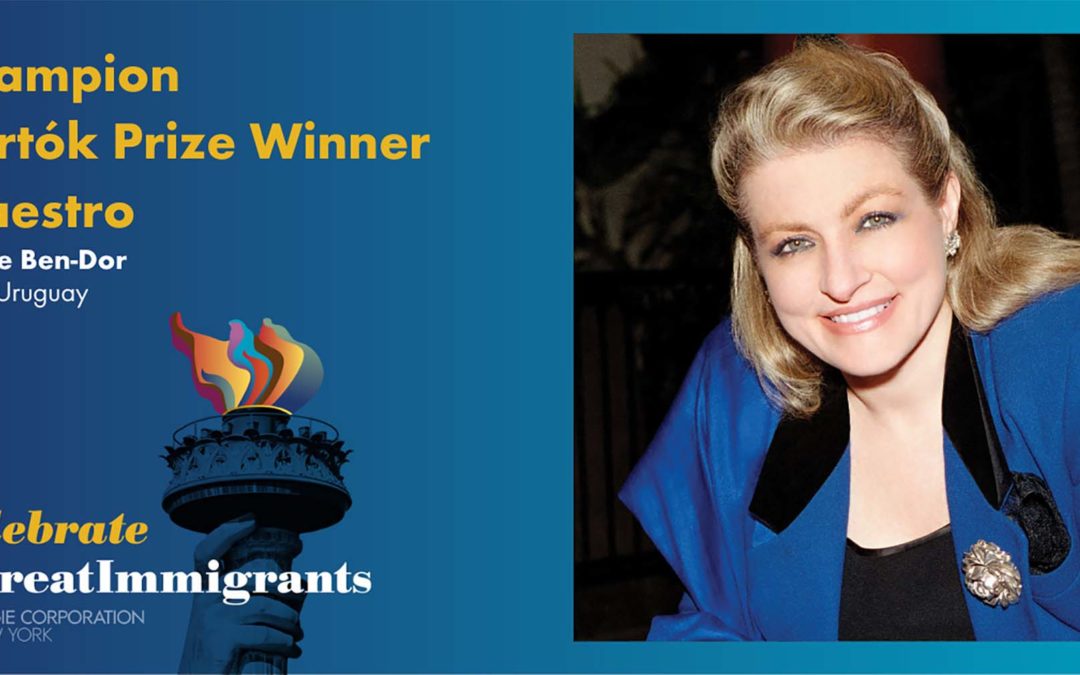 Conductor Gisèle Ben-Dor has been honoured by the Carnegie Corporation of New York and named a member of the 2021 “Great Immigrants” class. Each Fourth of July, the foundation honours naturalised citizens who, have strengthened the United States of America through their lives and examples. The Class of 2021 represents more than 30 countries of origin and emphasizes service to society, including honorees who are recognized for helping others as medical providers and researchers; as advocates for the disadvantaged, disabled, and disenfranchised; and as changemakers in politics, voting rights, climate change, and teaching.

As a 3-year-old child in Uruguay, Gisèle Ben-Dor started asking her parents to let her use the family piano. By the time she was 12, she was leading a band she had organized with a group of friends in Montevideo.

Today, Ben-Dor is the conductor emerita of the Pro Arte Chamber Orchestra of Boston, a post she was elected to by the musicians after serving as the group’s music director for a decade. Also conductor laureate of the Santa Barbara Symphony, she has served as a guest conductor with major orchestras around the world, including the Los Angeles Philharmonic, the London Philharmonic Orchestra, the London Symphony Orchestra, and the New York Philharmonic.

Born to Polish immigrants, Ben-Dor studied piano and taught herself how to play the guitar. After finishing high school in Uruguay, she moved to Israel and later the United States. Called “a ferocious talent” by the Los Angeles Times, she is renowned for her interpretations of the classics and as a tireless champion of Latin American music.

“Being a woman conductor may not be normal to the outside world, but it’s normal to me,” she once told the Jewish Telegraphic Agency. “I must say that since I came to the United States, I have been given every opportunity, and I hope I deserve it.”

A formidable and incandescent presence on the podium, conductor Gisèle Ben-Dor is “a ferocious talent” (The Los Angeles Times). “Ben-Dor casts her spell,” the Boston Globe writes, “a tremendous musician, expert technician, charismatic performer.” These comments reflect the overwhelming praise Ben-Dor has garnered in her appearances as guest conductor with major orchestras and opera houses throughout the world.

Ms. Ben-Dor also holds the position of Conductor Emerita of the Boston Pro-Arte Chamber Orchestra, a post to which she was elected exclusively by the musicians. A winner of the Bártok Prize of Hungarian Television, Ms. Ben-Dor has toured extensively in Eastern Europe. Born and raised in Uruguay of Polish parents, she studied at the Rubin Academy of Music in Tel-Aviv and the Yale School of Music before residing in the United States, where she lives with her husband and two sons.