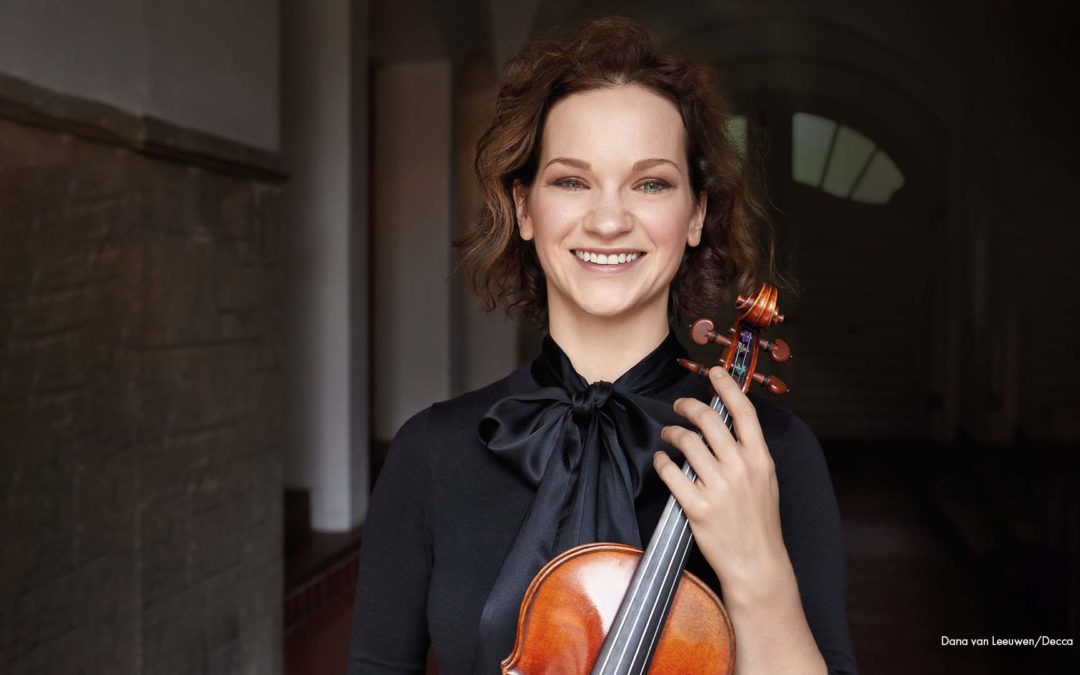 Hilary Hahn is named the inaugural Chicago Symphony Orchestra (CSO) Artist-in-Residence. Melding expressive musicality and technical expertise with artistic and intellectual curiosity, the three-time Grammy®-winner is one of the foremost violinists of our time. Her commitment to educational causes, honest and direct social media presence, and prolific commissioning of contemporary works seek to expand both the audience and repertoire for classical music. Appointed by CSO Music Director Riccardo Muti, she will begin her two-year tenure on September 1, 2021, and will continue in the role through June 30, 2023.

In the newly created position, Hahn will be in Chicago for multiple residencies each season. In December 2021, she will join the CSO for performances of Dvořák’s Violin Concerto, a work of special significance to the orchestra, which gave its U.S. premiere 130 years ago in October 1891. Next spring, she will perform a mixed recital program in the Symphony Center Presents Chamber Music series, and the coming season also sees her host two of her signature “Bring Your Own Baby (BYOB)” concerts. Providing a nurturing and welcoming environment for new parents to share their love of live classical music with their infants, these innovative free events will continue the CSO’s ongoing commitment to families with young children.

The “Bring Your Own Baby” concerts are just one of the ways Hahn plans to strengthen the CSO’s connections with the wider Chicago community. She is dedicated to amplifying diverse artistic voices and broadening access to classical music, and throughout her two-year appointment she will complement her public performances with a variety of educational and audience engagement initiatives. In collaboration with the CSO’s Negaunee Music Institute, she will participate in projects with the Chicago Musical Pathways Initiative, which provides coaching, mentorship and support to young musicians from diverse backgrounds who plan to pursue professional careers in music, and Notes for Peace, which empowers Chicago families bereaved by gun violence to create original songs memorializing their loved ones.

“I’m thrilled to be appointed Artist-in-Residence of the Chicago Symphony Orchestra. I have great admiration for the orchestra and Maestro Muti, and it is an honor to join their organization and be present in the city of Chicago over the next two seasons. Through the powerful conduit of the arts, a residency offers the chance to get to know a community and find ways to be helpful within it. I’m looking forward to exploring those connections and being of artistic service to the city of Chicago and its music lovers, and to making great music with the Chicago Symphony.”

“The Chicago Symphony Orchestra is committed to collaborating with musicians who inspire audiences with their artistry and love of music. I am looking forward to the ways that Hilary Hahn will work with the orchestra as CSO Artist-in-Residence and I commend her dedication to sharing music in new ways with audiences around the world, especially at this time when culture can be a healing force for all of us.”

Hahn made her first appearances at Chicago’s Orchestra Hall almost two decades ago, when she played Shostakovich’s First Violin Concerto with Riccardo Chailly and the Royal Concertgebouw Orchestra in February 2002. Five years later she made her Chicago Symphony Orchestra debut with subscription concert performances of Goldmark’s Violin Concerto. Over the next decade, she returned to Chicago for a number of recitals as part of the Symphony Center Presents Chamber Music series. The second of these featured Hahn’s world premiere performances of the new works she commissioned for In 27 Pieces: the Hilary Hahn Encores, her Grammy-winning project to revitalize the encore genre. Most recently, she reunited with the CSO under Marin Alsop’s leadership for performances of Sibelius’s Violin Concerto in May 2019. As the Chicago Tribune reports,

“Though the Sibelius Violin Concerto ranks among the most frequently performed and widely beloved in the repertoire, Hahn reimagined the piece with considerable rhetorical flair, technical bravura and interpretive insight. … Conductor, orchestra and soloist built toward a climax of unstoppable fervor and force.”

It was with her pairing of the Sibelius and Schoenberg concertos that Hahn won her second Grammy® Award.

“Hilary Hahn was and is the epitome of violinist perfection” (Nürnberger Nachrichten). The New York Times observes, she is “a daring, mature artist eager for new collaborations and repertory.”

Since making her debut with the Baltimore Symphony at the age of 11, Hahn has appeared as soloist with most of the world’s preeminent ensembles. Following previous artistic residencies at the Vienna Concert House, for JapanArts in Tokyo, and with the National Orchestra of Lyon, Philharmonic Orchestra of Radio France, Philadelphia Orchestra and Seattle Symphony, this season she serves as Virtual Artist-in-Residence of the Philharmonic Society of Orange County, with which she premiered Michael Abels’s Isolation Variation and a new cadenza to Mozart’s Fifth Violin Concerto. Other highlights of the present season include the release of her new album, Paris, recorded for Deutsche Grammophon with Mikko Franck leading the Philharmonic Orchestra of Radio France, and returns to the Frankfurt Radio Symphony, Houston Symphony and Dallas Symphony, where she delivered the keynote speech for the Second Annual Women in Classical Music Symposium.

Hahn is a prolific recording artist, all 20 of whose feature albums for Decca, Deutsche Grammophon and Sony have been Billboard top-ten bestsellers, while three have also been recognized with Grammy Awards. As a passionate advocate for new music, she has championed and commissioned works from a wide array of contemporary composers and is the dedicatee of such major new compositions as Einojuhani Rautavaara’s posthumously premiered Two Serenades for violin and orchestra, Lera Auerbach’s Sonata No. 4: Fractured Dreams and Jennifer Higdon’s Violin Concerto, which won the Pulitzer Prize for Music. The violinist’s most recent solo commission is 6 Partitas by the late Antón García Abril, who – like Auerbach, Higdon and Rautavaara – was a contributor to In 27 Pieces. Ever willing to push musical boundaries, Hahn has also undertaken a number of non-classical projects. She was featured in the Oscar-nominated soundtrack to The Village and has collaborated with folk guitarist Tom Brosseau, singer-songwriter Josh Ritter and alt-rock band … And You Will Know Us by the Trail of Dead.

Hahn has long demonstrated a deep commitment to her fans. Always free and offered on an infant-friendly schedule, her “Bring Your Own Baby” concerts build on her history of performances at such non-traditional spaces as community dance workshops, yoga studios and knitting circles. Her numerous educational initiatives include recordings of the first three books of the Suzuki Violin School; a book of sheet music to accompany In 27 Pieces, which includes her own fingerings, bowings and performance notes; and #100daysofpractice, a popular Instagram-based initiative that helps transform the lonely practice process into a social celebration of artistic development. An avid and early blogger, she posts a variety of original writing on her website.

The subject of two documentaries, Hahn holds honorary doctorates from Middlebury College and Ball State University, where there are three scholarships in her name. In 2001, she was named “America’s Best Young Classical Musician” by Time magazine.