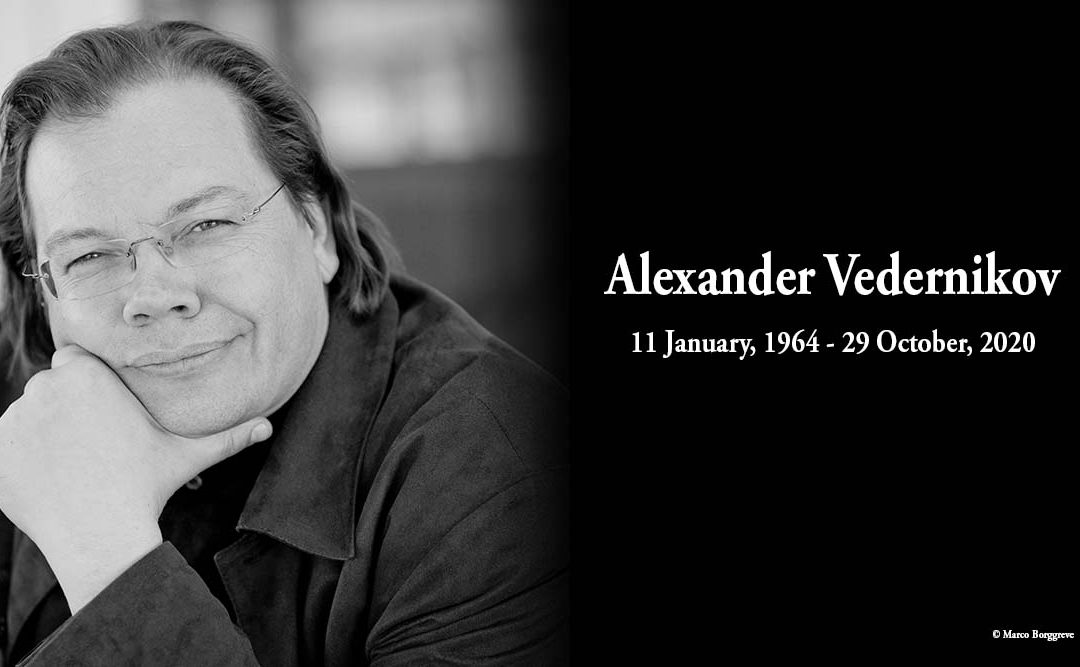 It is with great sorrow that we announce the passing of Maestro Alexander Vedernikov. He died of complications due to COVID-19 on 29 October 2020. As a conductor, he will be remembered for his leonine power, interpretations rich in colour and texture, and for his charismatic presence at the podium.

Maestro Vedernikov was represented at IMG Artists by Bridget Canniere and David Zavalkovski.

Bridget Canniere said, “I am devastated. Alexander Vedernikov was an incredible human being and I will always have the ultimate respect for him, not only as a musician and a conductor, but also as a friend. A strong and dynamic conductor, he was also a gentle and unassuming man. He was funny and kind, and generous to his fellow musicians and to all he knew. Musicians all over the world will be deeply saddened by this profound loss.”

David Zavalkovski said, “I am full of sorrow. Alexander Vedernikov was both an extraordinary musician, person, and my best friend. That this wonderful man, so full of life, talent, passion, and humour is taken from the world when he had so much more to give is tragic, and feels deeply unfair. I will forever miss his music and his friendship.”

Born on 11 January, 1964, in Moscow, Maestro Vedernikov was raised in a home full of music. His father, Alexander Filipovich Vedernikov was a bass who sang at the Bolshoi Theatre. His mother, Natalia Nikolaevna Gureeva, was a professor of organ at the Moscow Conservatory, from where he graduated in 1988. Following his studies with Leonid Nikolaev and Mark Ermler, he first worked as a conductor in the Stanislavski and Nemirovich-Danchenko Moscow Academy of Music. From 1988 through 1995, he was Assistant Conductor to Vladimir Fedoseyev at The Tchaikovsky symphony orchestra of Moscow Radio.

In spring 2018 Alexander Vedernikov conducted a highly acclaimed production of the Ring Cycle at Odense’s new Odeon Theatre with an exciting cast, including Torsten Kerl as Siegfried, Catherine Foster and Jennifer Wilson as Brünnhilde and Gerhard Siegel as Mime, a major project which concluded his tenure there as Chief Conductor.  Elsewhere in the field of opera, Alexander Vedernikov has frequently conducted at Berlin’s Komische Oper, and has worked throughout Italy at La Scala in Milan, La Fenice in Venice, Teatro Comunale in Bologna, Teatro Regio in Turin and Opera di Roma.  He has conducted productions at the Metropolitan Opera in New York, the Bastille Opera in Paris, the Finnish National Opera, Zurich Opera, Frankfurt Opera and Royal Stockholm Opera and Savonlinna Festival as well as the Deutsche Oper in Berlin.

It was and will remain an honour to represent this extraordinary, beloved titan in his professional career. IMG Artists sends our deepest sympathies to his family, friends and colleagues.