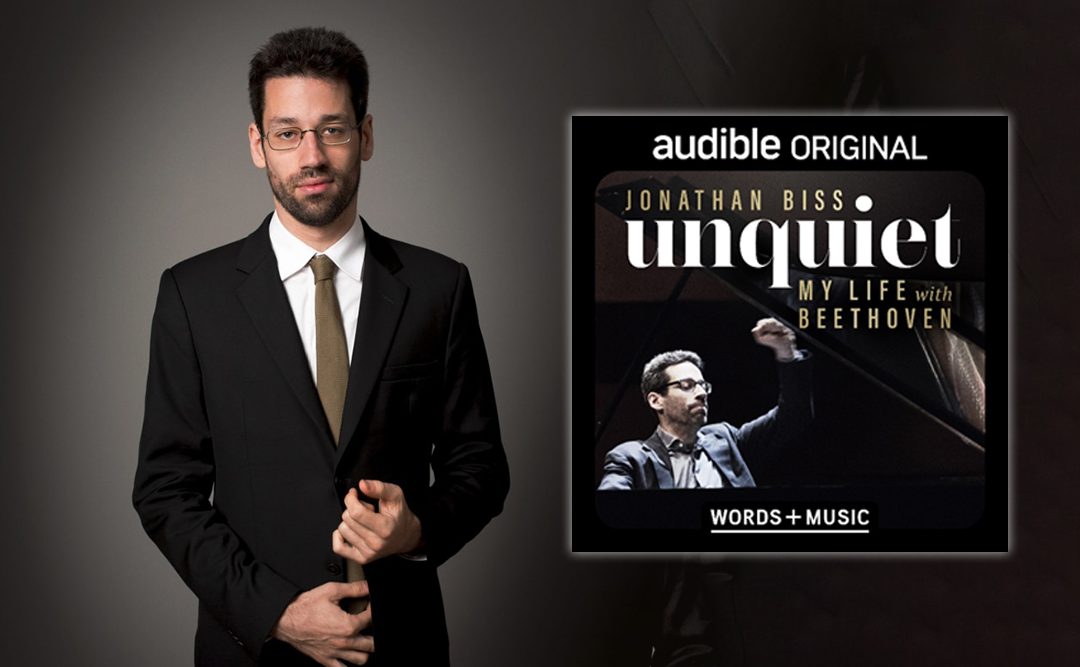 “…the timing of this pandemic held particular significance for me. Having allowed myself nearly a decade to record Beethoven’s sonatas, I was now playing all 32 of them in a single year, in concerts around the world. … The coronavirus put a stop to all [of this]. But to say that I was disappointed would be to oversimplify matters greatly. Because over the preceding months and even years, I had been quietly falling apart.”

– Excerpt from UNQUIET: My Life with Beethoven

Pianist Jonathan Biss will release his first Audible Original, UNQUIET: My Life with Beethoven on 17 December, the 250th anniversary of the composer’s baptism. Biss, “one of today’s foremost Beethoven exponents” (Chicago Tribune), examines the interplay between his lifelong passion for the music of Beethoven and his own personal struggles with anxiety. Part of Audible’s Words + Music programming, UNQUIET: My Life with Beethoven includes musical interludes of selections primarily from Beethoven’s piano sonatas, recorded specifically for the project. Biss also recently celebrated Beethoven’s 250th birthday on NPR’s Tiny Desk concert series.

Biss first encountered Beethoven’s music as a young boy, quickly becoming obsessed. After years of studying and performing the composer’s works for piano, he embarked in 2011 on a nine-year project to record all 32 of Beethoven’s landmark piano sonatas, while also performing and lecturing around the world. He expected this project to be “the most fulfilling experience of [his] life,” but he did not anticipate the latent anxieties that his journey would uncover.

“The confinement of life in the COVID era has given me, at long last, the time, the space, and the freedom to examine my relationships with music and with myself. It is a paradox much like the one at the heart of my relationship with Beethoven, who has both amplified my anxiety and, in recent times, suggested a better way of co-existing with it. In writing UNQUIET, I’ve tried to share what I’ve learned about these complicated relationships with an honesty that eluded me in the past.”

Biss’s nine-disc box set of the complete Beethoven piano sonatas was released in March 2020 by Orchid Classics. The collection has won broad acclaim, with Limelight Magazine writing that “no other recent survey of Beethoven’s wide-ranging piano sonatas compares [in terms of] sheer energy, engaging idiosyncrasy and probing intelligence.”

From 2013 to 2020, Biss also surveyed this repertoire in his online course Exploring Beethoven’s Piano Sonatas, available via Coursera in partnership with the Curtis Institute of Music. The course has attracted more than 150,000 students from nearly every country in the world. At the time of the COVID-19 outbreak, Mr. Biss was in the midst of multiple recital series of Beethoven’s complete piano sonatas, as well as numerous performances of selections from the sonatas. These concerts included a recital for New York’s 92nd Street Y that became one of the first widely viewed online classical events of the coronavirus era—with more than 280,000 views on Facebook.

Jonathan Biss channels his deep musical curiosity into performances and projects in the concert hall and beyond. In addition to performing with today’s leading orchestras, he continues to expand his reputation as a teacher, musical thinker, and one of the great Beethoven interpreters of our time. He recently joined Mitsuko Uchida as Co-Artistic Director of the Marlboro Music Festival, where he has spent thirteen summers. He has written extensively about the music he plays, and has authored three e-books.

Biss’s projects, including his decade-long Beethoven immersion, represent his complete approach to music-making and connecting his audience to his own passion for the music. Previous projects have included an exploration of composers’ “Late Style” in various concert programs at Carnegie Hall, the Barbican Centre, Philadelphia Chamber Music Society, and San Francisco Performances. He also published the Kindle Single Coda on the topic. Schumann: Under the Influence was a 30-concert exploration of the composer’s role in musical history, for which Mr. Biss also recorded Schumann and Dvořák piano quintets with the Elias String Quartet and wrote A Pianist Under the Influence.

Biss represents the third generation in a family of professional musicians that includes his grandmother Raya Garbousova, one of the first well-known female cellists (for whom Samuel Barber composed his Cello Concerto), and his parents, violinist Miriam Fried and violist/violinist Paul Biss. Growing up surrounded by music, Mr. Biss began his piano studies at age six, and his first musical collaborations were with his mother and father. He studied with Evelyne Brancart at Indiana University and with Leon Fleisher at the Curtis Institute of Music. He has since appeared with major orchestras around the world, including in the U.S. with the Los Angeles and New York Philharmonics; the Boston, Chicago, and San Francisco Symphonies; and the Cleveland and Philadelphia Orchestras. He has also been recognized with numerous honors, including Lincoln Center’s Martin E. Segal Award, an Avery Fisher Career Grant, the 2003 Borletti-Buitoni Trust Award, and the 2002 Gilmore Young Artist Award.