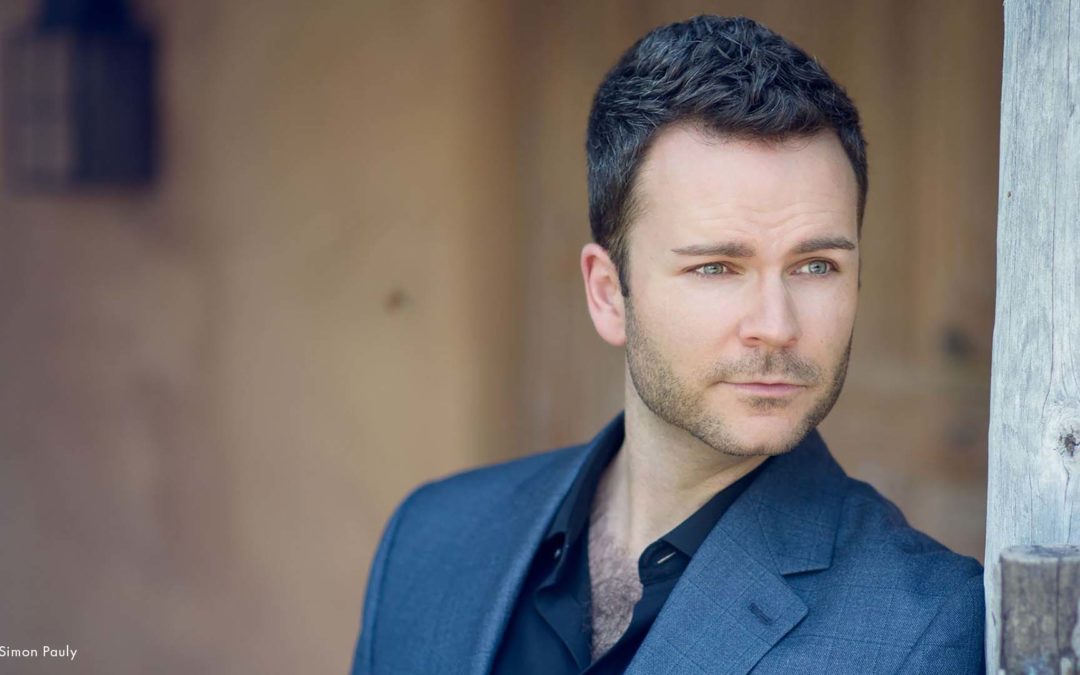 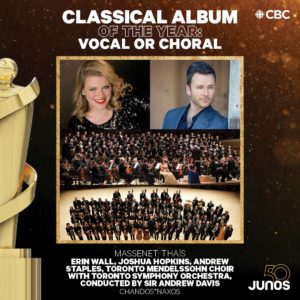 Gramophone’s Tim Ashley writes of the winning recording, “there’s a real surge of emotion at the climax of the Act 2 duet with Joshua Hopkins’s outstanding Athanaël. His is a remarkable, unforgettable performance, sung with consistently expressive beauty, and quite superbly characterised, with every second of Athanaël’s progress from prurient fanaticism to desire, atheism and despair registering with quite astonishing vividness. Hopkins . . . makes the new recording more than well worth hearing.”

“The Toronto Symphony Orchestra (TSO) is thrilled to be the recipient of the 2021 JUNO Award for Best Classical Album: Vocal or Choral for its album, Massenet: Thaïs, as announced earlier tonight.

“The award for Best Classical Album: Vocal or Choral, along with 14 other categories, were presented during the 50th JUNO Opening Night Awards on June 4, 2021, live online on CBC Music.

The TSO recording of Massenet’s emotionally riveting opera Thaïs was released in May 2020 on the prestigious Chandos label. Conducted by TSO Conductor Laureate Sir Andrew Davis, and featuring a cast of renowned Canadian and international singers, with the Toronto Mendelssohn Choir, Massenet: Thaïs was recorded live by Soundmirror, Inc. at Roy Thomson Hall in Toronto in November 2019.

“The recording received high praise from critics worldwide, who singled out the cast and the Orchestra under Sir Andrew Davis, calling it “thrilling concert performance” (CBC Music). Massenet: Thaïs also marks the final recording of Canadian soprano Erin Wall, who lost her life to cancer in October 2020. Erin worked with the TSO several times over the course of her career, and the TSO is the fortunate recipient of her vibrant and emotionally charged portrayal in the title role.

“’On behalf of the TSO, I am delighted to thank the JUNO Awards for this honour, and offer a big congratulations to the exceptional TSO musicians and extraordinary soloists—the late Erin Wall, Joshua Hopkins, Andrew Staples and Nathan Berg, the wonderful Toronto Mendelssohn Choir, and to conductor Sir Andrew Davis for Massenet: Thaïs,’ says Gustavo Gimeno, TSO Music Director. ‘The recognition is especially meaningful because this opera-in-concert was recorded only a few months before the world’s concert stages were silenced. I am grateful to the entire company as well as our recording partner, Chandos Records, and sound engineers, Soundmirror, Inc. for capturing this concert so beautifully.’”

The TSO’s Massenet: Thaïs is available for streaming on Spotify and Apple Music, and for purchase on iTunes and directly from the TSO.