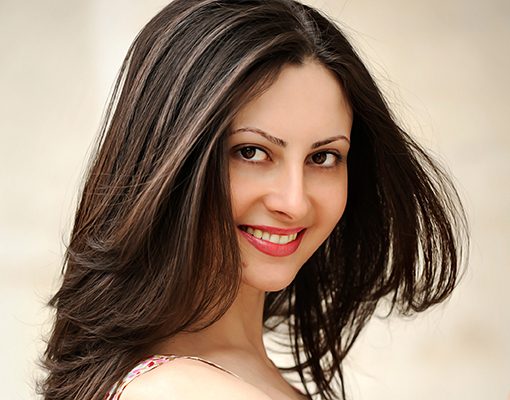 Born in Vladikavkaz in Russia, Elena Tsallagova studied at the St Petersburg Conservatory. She is a first prize winner of the Rachmaninoff competition.Elena studied interpretation with Ileana Cotrubas and in 2006 entered the Young Artists Programme at the Opéra National de Paris. In 2008 she was invited to perform the title role in The Cunning Little Vixen at the Opéra Bastille. The DVD of the production was awarded DVD of the year at the 2009 Victoires de La Musique.

After attending the Academia Rossiniana in Pesaro, she was invited by maestro Alberto Zedda at the Rossini Opera Festival where she sung Corinna, Amenaide (Tancredi), Berenice (L’occasione fa il ladro).

Following her engagement at the Teatro Real in Madrid in L’incoronazione di Poppea, she was invited to sing Cherubino (Le Nozze di Figaro) there in 2014.

She also debuted at the Opéra National du Rhin in The Cunning Little Vixen and Cavalli’s La Calisto and summer 2017 saw her sing Micaela at the Bregenz Festival.

In the 2019/20 Elena made her debut at the Mozartwoche Salzburg in Bob Wilson’s new production of Mozart’s Der Messias conducted by Mark Minkowski.

In the 2021/22 season, Elena appeared in Barry Kosky’s new production of The Cunning Little Vixen at the Bayerische Stsatsoper, for which she has received outstanding reviews from the world’s leading publications.

In the 2021/22 season, Elena is invited by three major summer festivals. She first appears at the Salzburg Festival as La Vierge in Arthur Honegger’s Jeanne d’Arc. She returns to the Bayerische Staatsoper to perform in The Cunning Little Vixen at The Munich Opera Festival. This season Elena also makes her anticipated role debuts as Mimi (La Bohème) at the Deutsche Oper Berlin and in the title role of Alcina at the Staatsoper in Stuttgart.

“Elena Tsallagova, [who] was the Mélisande of one’s dreams. Not only did she look like a Pre-Raphaelite damsel right out of a painting by Edward Burne-Jones, with whom Maeterlinck was obsessed, but she sang as if Debussy wrote the role especially for her. So natural was her phrasing that it was easy to forget that she was singing, not just acting, despite her clear, liquid soprano. And she broke your heart whenever Mélisande made one of her forlorn statements of unhappiness, such as “Je suis malade ici”.”

“Elena Tsallagova was outstanding as the unbalanced Contessa di Folleville, her agile soprano able to reach coloratura heights without apparent effort or loss of quality.”

“Elena Tsallagova [was] an enchanting Nanetta, her voice of spun gold.”

“Elena Tsallagova was outstanding as the unbalanced Contessa di Folleville, her agile soprano able to reach coloratura heights without apparent effort or loss of quality. “

“Elena Tsallagova [was] an enchanting Nanetta, her voice of spun gold.”

“Une Mélisande remarquable, à la fois froide et corporelle (comme le souhaitait Barthes), excellente dans les parties lyriques plus difficiles – une des seules à passer constamment la barre de la fosse.
[She is a remarquable Mélisande, both seemingly absent and physically present (as was Barthes’ wish). She is excellent in the most difficult lyrical sections and is one of the only singers who are constantly heard over the orchestra.]“

“Rhythms, with the very occasional exception, were taut and the structure was admirably clear. Elena Tsallagova showed herself as agile of voice as she was on stage, in the title role. Her rapport with Hannah Esther Minutillo’s Fox was genuinely moving, whatever reservations one might entertain in principle about a couple of foxes falling in love.”