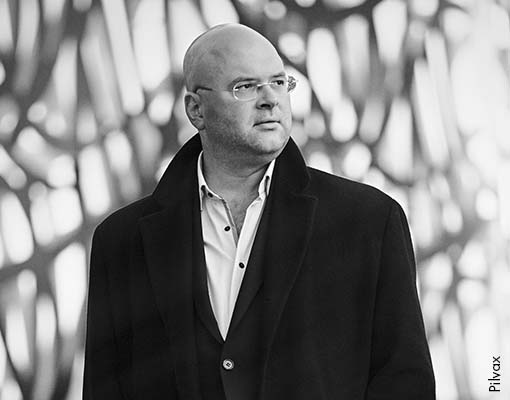 Internationally celebrated as both a soloist and conductor, Florian Krumpöck has proven his outstanding ability in the international concert scene. Appointed as one of the youngest musical directors in German history in 2011 Krumpöck masters a broad variety of opera and concert literature as well as a wide piano repertoire, and fascinates the audiences with his double role as a soloist and as a conductor.

He counts some of the most distinguished pianists of our time among his teachers, like Rudolf Buchbinder, Gerhard Oppitz and Elisabeth Leonskaja.

Upon the advice of his mentor Daniel Barenboim, Krumpöck expanded his repertoire to include numerous symphonic works and operas and began to work increasingly on conducting.

Krumpöck had the opportunity to fill in for the first time as a conductor in 2006 with the Jerusalem Symphony Orchestra. This performance was an international sensation and he was subsequently appointed principal conductor of the Baden Sinfonietta.

2007 saw Krumpöck conduct the Philadelphia Orchestra with great success as part of a New Year’s concert at the Kennedy Center in Washington. In 2011 Krumpöck was appointed musical director at the Volkstheater Rostock and as principal conductor of the Norddeutsche Philharmonie.

He gave his debut at the Royal Opera in Copenhagen conducting the Royal Danish Orchestra, with two inaugural open-air concerts and a production of Der Rosenkavalier, staged by Marco Arturo Marelli.

In 2011 Florian Krumpöck was appointed musical director for concert and opera at the Volkstheater Rostock and opened his first season with a successful production of the opera La Bohème. In 2012 he was also the conductor of the premiere of Rigoletto at the opera festival in Gars am Kamp, Austria.

Since the 2018/19 season, Florian Krumpöck has worked closely with the Théâtre du Capitole in Toulouse: in October 2018 he conducted the ballet production of Dans les pas de Noureev, which was also staged in Montpellier in January 2019 with the Opéra Orchestre National Montpellier and the Ballet du Capitole. For the 2019/20 season, he will conduct a new production of Janáček’s opera Jenufa with, among others, the soprano Angela Denoke.

In June 2015 Krumpöck conducted the brilliantly criticized Klassik am Dom-Gala with soloists Angelika Kirchschlager and Michael Schade with the Bruckner Orchestra Linz. In 2018 Florian Krumpöck conducted the gala concert again, this time with Juan Diego Florez as a soloist. In February 2019 Florian Krumpöck made his debut at the Great Hall of the Vienna Konzerthaus next to Piotr Beczala as part of the renowned “Great Voices” cycle.

“The 6 Symphonie Concert ended with bravos and enthusiastic applause. This time the Loh Orchestra was conducted by guest conductor Florian Krumpöck, who was also the soloist in the piano concerto.”

“And that the time is ripe was proven by the first concert under the guidance of Florian Krumpöck, an internationally renowned conductor and pianist who seems to be coming at exactly the right moment.”