Three-time Grammy Award-winning violinist Hilary Hahn melds expressive musicality and technical expertise with a diverse repertoire guided by artistic curiosity. Her barrier-breaking attitude towards classical music and her commitment to sharing her experiences with a global community have made her a fan favorite. Hahn is a prolific recording artist and commissioner of new works, and her 20 feature recordings have received every critical prize in the international press.

As Virtual Artist-in-Residence with the Philharmonic Society of Orange County, Hahn performs three programs this season, including the world premiere of a newly composed cadenza to Mozart’s Violin Concerto No. 5. Hahn goes on to perform the concerto with the Houston and Dallas Symphony Orchestras; in Dallas, she will also deliver the keynote speech of the Second Annual Women in Classical Music Symposium. Hahn later brings the concerto to the Salzburg Easter Festival, where she performs with Sir Antonio Pappano and the Staatskapelle Dresden.

Hahn also spends the season performing the Dvořák and Brahms Violin Concerti in Vienna and on tour with the Vienna Symphony Orchestra; additional performances of the Dvořák are scheduled with the BBC Philharmonic and Frankfurt Radio Symphony orchestras. Later in the season, Hahn joins pianist Andreas Haefliger for a series of recitals in South Korea and Japan.

A strong advocate for new music, Hahn has championed and commissioned works by a diverse array of contemporary composers. In the 2018-19 season, before her season-long sabbatical in 2019-20, Hahn premiered two new works written for her: Einojuhani Rautavaara’s Two Serenades for violin and orchestra, completed posthumously by Kalevi Aho, and Lera Auerbach’s Sonata No. 4: Fractured Dreams. The season was bookended by another major release: her most recent solo commission, 6 Partitas by Antón García Abril. García Abril, Auerbach, and Rautavaara had been contributing composers for In 27 Pieces: the Hilary Hahn Encores, Hahn’s Grammy Award-winning multi-year commissioning project to revitalize the duo encore genre.

Hahn has related to her fans naturally from the very beginning of her career. She has committed to signings after nearly every concert and maintains and shares a collection of the fan-art she has received over the course of 20 years. An avid and early blogger, Hahn hosts on her website a variety of original writing dating back to 2002. Her “Postcards from the Road” feature, a series of personal updates from her travels around the world, evolved from an initial year-long postcard project that she began with a classroom of third-graders. Her Bring Your Own Baby concerts, developed over recent residencies in Vienna, Seattle, Lyon, and Philadelphia, create opportunities for parents of infants to share their enjoyment of live classical music with their children in a nurturing, welcoming environment. Always free and offered on an infant-friendly schedule, they build on Hahn’s history of performances in unconventional venues such as community dance workshops, yoga studios, and knitting circles.

Hahn’s commitment to her fans extends to a long history of educational initiatives. A former Suzuki student, she released new recordings of the first three books of the Suzuki Violin School in 2020, in partnership with the International Suzuki Association and Alfred Music. The recordings also appear on the teaching platform SmartMusic. In 2019, she released a book of sheet music for her encores project, In 27 Pieces: the Hilary Hahn Encores. The book includes her own fingerings and bowings, as well as performance notes for each of the commissioned works. That same year, she created a mini-video-masterclass series around 6 Partitas, and donated her $25,000 Glashütte Originals Festspielpreis to Project 440, a Philadelphia music- education nonprofit program that helps young people build essential life skills. Her Instagram-based practice initiative, #100daysofpractice, has helped to demystify the typically grueling and isolating practice process, transforming it into a community-oriented, social celebration of artistic development. Since creating the hashtag in 2017, Hahn has completed the project three times under her handle, @violincase; fellow performers and students have contributed nearly 500,000 posts under the hashtag.

Hahn is a prolific and celebrated recording artist whose twenty feature albums on Decca, Deutsche Grammophon, and Sony have all opened in the top ten of the Billboard charts. In addition, she can be found on three DVDs, an award-winning recording for children, and various compilations. Three of Hahn’s albums—her 2003 Brahms and Stravinsky concerto disc, a 2008 pairing of the Schoenberg and Sibelius concerti, and her 2013 recording of In 27 Pieces: the Hilary Hahn Encores—have been awarded Grammys. Jennifer Higdon’s Violin Concerto, which was written for Hahn and which she recorded along with the Tchaikovsky concerto, went on to win the Pulitzer Prize. In 2017, she released a fan-oriented retrospective collection that featured new live material recorded with classic direct-to-disc technology and showcased art from her fans. Hahn is the subject of two documentaries by filmmaker Benedict Mirow: Hilary Hahn – A Portrait, filmed in 2004, and Hilary Hahn – Evolution of an Artist, which chronicles the subsequent 16 years of her career.

Hahn has also participated in a number of non-classical productions. She was featured in the Oscar-nominated soundtrack to The Village and has collaborated on two records by the alt-rock band …And You Will Know Us By The Trail of Dead, on the album Grand Forks by Tom Brosseau, and on tour with folk-rock singer-songwriter Josh Ritter. In 2012, Hahn launched Silfra, a free-improv project with experimental prepared-pianist Hauschka, following an intensive period of development.

Hahn is the recipient of numerous awards and recognitions. In 2001, she was named “America’s Best Young Classical Musician” by Time magazine, and in 2010, she appeared on The Tonight Show with Conan O’Brien. She also holds honorary doctorates from Middlebury College—where she spent four summers in the total-immersion German, French, and Japanese language programs—and Ball State University, where there are three scholarships in her name.

The 2020 Opus Klassik nominations are announced, and IMG Artists congratulates the extraordinary artists nominated for this prestigious honour. The awards will be announced and streamed on 18 October live from the Konzerthaus Berlin. For more information, please visit...

The International Suzuki Association, in conjunction with Alfred Music, has announced that Hilary Hahn, with pianist Natalie Zhu, has recorded the Suzuki Violin School, Volumes 1 – 3. The much anticipated recordings will be available in spring 2020. Ms Hahn said, "I...

Three-time Grammy Award-winning violinist Hilary Hahn has donated a $25,000 gift to Project 440, a Philadelphia based non-profit. Hahn, who recently announced a yearlong sabbatical, received the award from Glashütte Original Festspielpreis for her...

“I cannot think of a single performer who begins to compare with Hilary Hahn. This is quite simply magnificent violin-playing”

“Hilary Hahn was and is the epitome of violinist perfection.”

“Hahn conjured into being a cathedral of sound: spacious and full of dazzling beauty.”

“Nothing [Hahn] does is for show. Technique, feelings, heart and mind are intuitively fused, as Bach always demands”

“Hahn went well beyond her customary excellent intonation and exceptional technique to present something brimming with emotion and enthusiasm, excitement and interpretive imagination.”

“[Hahn} removes the gravity and lets the song of her violin climb to dizzying heights with perfect beauty and gives this done-to-death piece a soul, as if it is being heard for the first time.”

“because there is a category that stands above all others: the sheer musicality and musical passion of this violinist.”

“Let’s simply say, she does everything right – just right. This becomes most evident whilst playing alone as with the Johann Sebastian Bach, whose Partita No.3 for violin solo was never played better in violin history even by the grand masters – indeed Hilary rather surpasses them through the naturalness of her music-making.”

“The Vieuxtemps [Fourth Violin Concerto] … is remarkable, with Hahn playing the role of melodramatic protagonist to perfection; she has a powerful presence and, in the finale, finds a truly heroic tone.”

“Her playing was at once impetuous and authoritative, brilliant and beautiful.”

“Hilary Hahn is and remains a phenomenon.”

“This diverse collection of miniatures represents the fruit of Hahn’s ambitious commissioning project… Hahn was already a well-established virtuoso. This project marks her evolution as something far more interesting: a creative force.”

“Individually, the pieces represent an admirable span of ages, nationalities and styles, with veteran creators like Einojuhani Rautavaara and Valentin Silvestrov placed alongside contemporary concert-world stars — Jennifer Higdon, Mark-Anthony Turnage, Nico Muhly — and emerging artists. What impresse[s] most… [is] how well the package coheres — a matter of Ms. Hahn’s smart pacing — and how deftly Ms. Hahn negotiated constant shifts among disparate techniques and moods.”

“At 33, [Hahn] sits atop the pantheon of stellar violinists.”

“Throughout, Hahn was an unflappably confident advocate. The core of her technique is precision and refinement — elegant sound; frictionless, clean bowing and intonation; polished, rounded-off phrasing.”

“She deserved the ovation. Her performance began inauspiciously, with an authority that felt cool, even chilly. But as Bach’s lines wove together, her playing gradually deepened into something intense, adventurous and affecting. It was a microcosm of Ms. Hahn’s career. Born in 1979, she started out as a prodigy of rare clarity and virtuosity and has developed into a daring, mature artist eager for new collaborations and repertory.” 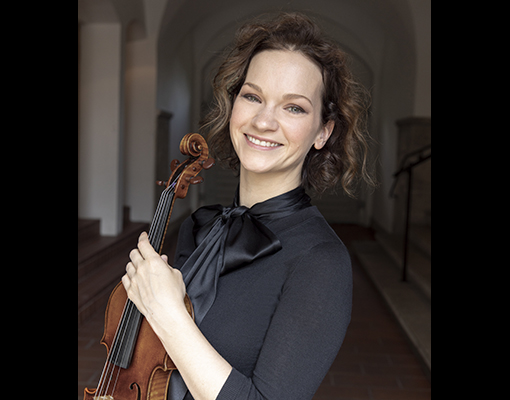 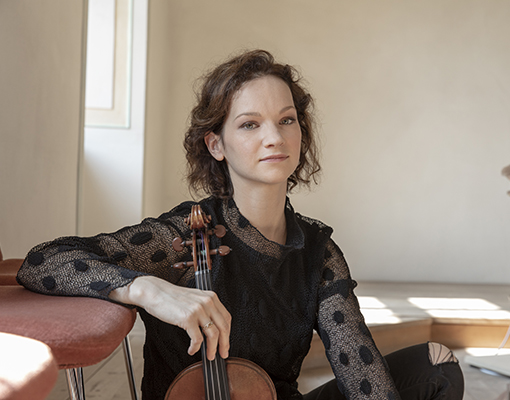 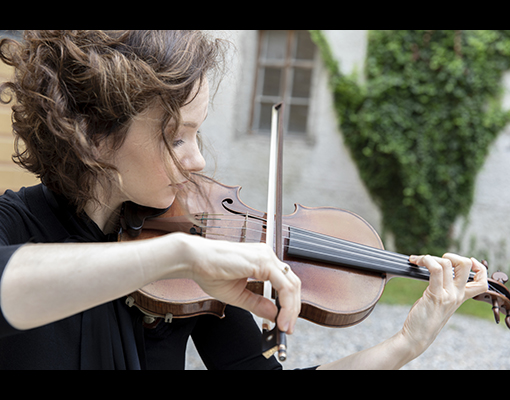