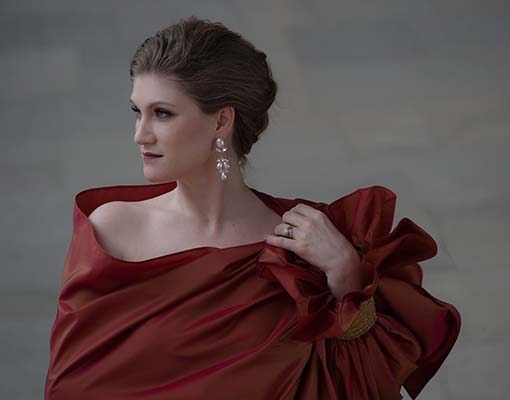 From San Francisco to the Vienna State Opera, from Zerbinetta to Salomé, Canadian soprano Jane Archibald is one of the most widely celebrated sopranos of her kind, known for mastering the most relentless of tessituras with complete ease, grace, and breathtaking artistry in roles such as Daphne, Mathilde, Donna Anna, Lucia and Konstanze to name just a few.

Known for her artistry and flawless vocal technique alike, Jane’s career is one of great scope that has generated excitement across Europe and North America with recent engagements including the title role in Alcina at Glyndebourne, the title role in Daphne at Oper Frankfurt, Mathilde in Guillaume Tell at Opéra National de Lyon, Tytania in A Midsummer Night’s Dream at the Deutsche Oper Berlin, Roxana in King Roger at Oper Frankfurt, the title role in Semele with the Shanghai Philharmonic Orchestra at the Shanghai Symphony Hall, and Ginevra in Ariodante at the Palau de les Arts Reina Sofia.

Other roles in Jane’s repertoire include Donna Anna in Don Giovanni, Konstanze in Die Entführung aus dem Serail, the title role in Lucia di Lammermoor, The Three Heroines in Les Contes d’Hoffmann, Cleopatra in Giulio Cesare in Egitto and Rosalinde in Die Fledermaus.

Jane has been featured on multiple recordings and DVDs. Her first solo CD, a programme of Haydn arias, was released on the ATMA Classique label and won a JUNO Award for Classical Album of the Year. Her recording of Die Entführung aus dem Serail (June 2016) with conductor Jérémie Rhorer, received rave reviews, as did her recording of Messiaen’s Poèmes pour Mi with Ludovic Morlot and the Seattle Symphony. The latest addition to her discography is a recording of Bernstein’s Candide, with Marin Alsop and the London Symphony Orchestra.

After beginning her professional opera career in her native Canada, Jane was an Adler Fellow and Merola participant with the San Francisco Opera. She then moved to the Vienna State Opera as a member of the ensemble, debuting many leading lyric soprano and coloratura roles early on in her career.

Jane lives in Halifax, NS, with her husband, tenor Kurt Streit, and their two children.

“…a fine cast of excellent voices, led by Canadians Russell Braun, Michael Schade, and Jane Archibald – a musical tour de force. … Jane Archibald’s Donna Anna was thrilling from first note to last, with a sweep and an edge that made her presence on stage aurally riveting.”

“Jane Archibald’s “Ach! Ich liebte” is dramatic and causes chills, the “Traurigkeit” is simply exquisite, and “Martern aller artern,” is, without a doubt, the height of virtuosity! Whether it be her projection, tone, intensity, breath or agility, as a soloist or in the many ensembles, her voice radiates and surprises at every moment.”

“Jane Archibald is a Roxane dedicated body and soul to her guru (the Shepherd). This role is formidable because it requires a soprano that is as much a coloratura soprano (elegy in Act II) as a dramatic soprano (all of III) and the Canadian soprano seems just as much one as she is the other.”

“Jane Archibald was all vocal thunderbolts and lightning flashes as Armida, holding her own against the polished theatrical creation that is Pisaroni’s slippery Argante.”

“…a fine cast of excellent voices, led by Canadians Russell Braun, Michael Schade, and Jane Archibald – a musical tour de force. … Jane Archibald’s Donna Anna was thrilling from first note to last, with a sweep and an edge that made her presence on stage aurally riveting. “

“Jane Archibald’s “Ach! Ich liebte” is dramatic and causes chills, the “Traurigkeit” is simply exquisite, and “Martern aller artern,” is, without a doubt, the height of virtuosity! Whether it be her projection, tone, intensity, breath or agility, as a soloist or in the many ensembles, her voice radiates and surprises at every moment.”

“The overall tone is always right, passing from melancholy to burlesque, from buoyant to falsely serious, in short, Mozartian. Qualifiers that could all be equally applied to Jane Archibald. The Canadian soprano convinces from her initial aria. Usually sadly vexed, this Konstanze shows a rapidly beating heart, darting and slicing her high notes while giving nuance and variation as fitting. The second and third arias cemented the support of a very enthusiastic audience: the virtuosity of her vocalization, the ease, the legato, the breath, of course, but especially the psychological construction, sentence by sentence, of a young woman in combat with herself and with a man’s world. “

“In the Camerata concert, she proved her reputation as “the coloratura soprano of our time” by first delicately singing “Ruhe Sanft” in the highest heights and, after that, practically allowing “the tiger of fate” to spring directly into the hall (“Tiger! Wetze nur die Klauen”). […] Nothing is too heavy for Jane Archibald’s stupendous vocal virtuosity. Her ornamentation in “des Himmels Segen belohne dich!” (from “Martern aller Arten”) has not been heard this way before in Salzburg. Breathtaking!” “

“Jane Archibald surely has few (any?) equals in the title role, her plush silvery soprano filling the house with a vibrant presence. Hers is one of the most assured techniques in the business, and she tossed of the coloratura of “Myself I shall adore” with utter confidence and great tonal beauty. The jaw-dropping accuracy and breath-taking rapidity of the (almost non-stop) melismas did not seem intended to be heard merely by mortal ears. But Ms. Archibald was much more that flash and dazzle. Her sonorous, limpid treatment of Handel’s legato phrases was no less impressive. “

“Archibald shows off a spectacular instrument and gorgeous technique in eight arias and one recitative from five operas… This is a treat from beginning to end.”

“The voice is clear with clean, articulate, effortless runs – necessary ingredients for any coloratura. Haydn’s vocal writing is often instrumental in nature, like woodwind parts, and Archibald negotiates the quick turns confidently. But, in the most lyrical sections, she also captures the conflicting emotions with a strong sense of drama and expression. The voice is lovely throughout.”

“This well-chosen program of arias (and overtures) from Haydn’s operas shows off her many gifts. She’s a marvelous technician, with absolutely fluid coloratura, an old-fashioned but welcome bell-like sound at the top of her voice.., totally even production for the two-and-a-half octaves below that, and a lovely trill… Archibald is a charming artist.”

“…the coloratura of soprano Jane Archibald as Zerbinetta, who stopped the show with her brilliant vocal pyrotechnics. Together they represented what this opera is all about: the contrast between deep and profound art, and light, delightful entertainment.”

” …And that is when Jane Archibald triumphs as Zerbinetta, a frivolous woman. From virtuosity to virtuosity, this production gives meaning to the succession of difficulties. It’s a veritable display of fireworks! The soprano remains a lovely bird, difficult for her companions to catch, ready for anything.”

“Canadian coloratura soprano Jane Archibald made her Metropolitan Opera debut and role debut as Ophélie in “Hamlet” on April 5. The strikingly attractive, angular blonde soprano has a youthful sound and stage presence that convinced one of the character’s innocence and fragility. Her voice is a lovely, pearly-toned instrument that moved effortlessly from full lyric outpouring to scintillating coloratura display. Her Mad Scene got one of the strongest ovations of the evening, even after a disturbing smoke incident caused by an overheated lighting instrument cleared the balconies. She is currently active on German stages; the Met should convince Archibald to return stateside on a regular basis. “

“…Jane Archibald is magnetic, witty and winning as a flapper Zerbinetta à la Sally Bowles. With her almost casual brilliance in the aria “Grossmächtige Prinzessin,” Archibald stops the show.” 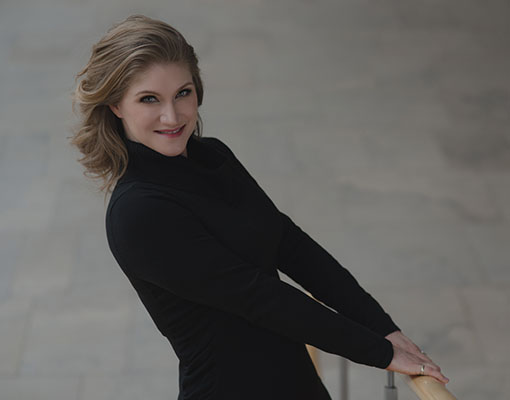 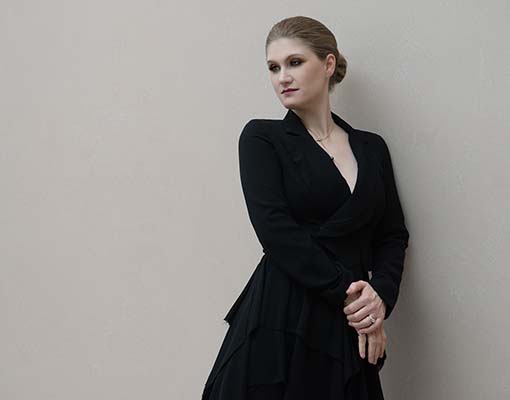