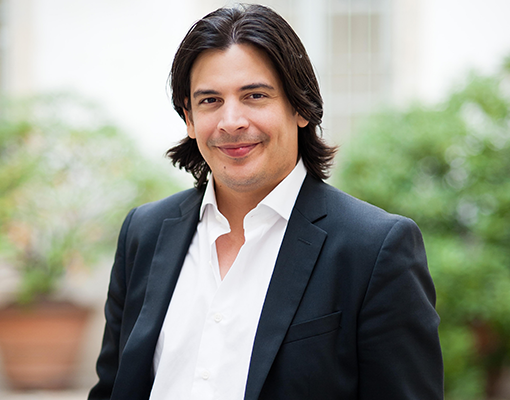 The Venezuelan-born, Spanish conductor José Luis Gomez began his musical career as a violinist but was catapulted to international attention when he won First Prize at the International Sir Georg Solti Conductor’s Competition in Frankfurt in September 2010, securing a sensational and rare unanimous decision from the jury.

Gomez’s electrifying energy, talent and creativity earned him immediate acclaim from the Frankfurt Radio Symphony Orchestra where he was appointed to the position of Assistant Conductor, a post created especially for him by Paavo Jarvi and the orchestra directly upon the conclusion of the competition.

In 2016, Gomez was named Music Director of the Tucson Symphony Orchestra.  Since taking the helm, the orchestra has seen a marked increase in subscribers and donors to the orchestra and Gomez has worked tirelessly to introduce innovative and exciting new outreach activities whilst continuing to nurture and support existing education projects.  For example the unique Young Composers’ Project which sees students new to composing working closely with orchestra representatives to create new compositions, culminating in a public performance and recording. Maestro Gomez is also a champion of many lesser-known composers from South America, programming their works sensitively with more recognised classical names, creating hugely interesting and unique concerts.  He has also been responsible for commissioning new works, for example he and the orchestra were co-commissioners of a new concerto for orchestra and trumpet by Arturo Marquez which was given its US premier under Gomez’s baton in 2019.  Gomez has also created new concert series for the audience including a fabulous new outdoor concert presentation to celebrate Mexican Independence Day.

Upcoming highlights include two debuts in autumn 2022: one with National Symphony Orchestra (Washington DC) where he will conduct a new piece by Paquito d’Rivera performed by Yo-Yo Ma; and he will also enjoy his first time conducting the Indianapolis Symphony in a programme to include Strauss Der Rosenkavalier Suite and Brahms Piano Concerto No.2 with Stephen Hough.  Over the summer he conducted Opera de Tenerife’s Opera Gala at Auditorio de Tenerife and conducted the Chineke! Junior Orchestra at London’s Royal Festival Hall.

Other recent highlights saw Gomez return to the Flanders Symphony Orchestra to conduct a programme featuring soloist Johannes Moser in Dvorak’s Cello Concerto, which toured venues around Belgium before returning to Brussels for Gomez to lead the orchestra in their season gala at Queen Elisabeth Music Chapel and other returns to conduct the Colorado Symphony, the Elgin Symphony Orchestra and the Pacific Symphony Orchestra.

In The Americas he enjoys a close relationship with the Edmonton Symphony Orchestra, and has also worked with such orchestras as the Houston Symphony, National Arts Centre Orchestra of Ottawa, Vancouver, Colorado, Grand Rapids, Winnipeg, and Alabama Symphonies, the Chamber Orchestra of San Antonio, Rochester & Louisiana Philharmonics, Pasadena, Elgin, and he made his debut at Carnegie Hall with YPhil Youth International Philharmonic.  Further south, he has worked with Orquestra Sinfonica Brasileira, Bogota Philharmonic Orchestra and Orquesta Nacional de Peru.

Opera highlights have included La Bohème at Frankfurt Opera and a new production of Rossini’s La Cenerentola at Stuttgart Opera, of which he also conducted the revival in the following season, La Forza del Destino in Tokyo with the New National Theatre, Don Carlo and Norma at The State Opera in Tbilisi, Georgia, La Traviata in concert with Sacramento Philharmonic Orchestra, Le Nozze di Figaro and Don Giovanni with Teatro Sociale di Como, with whom he also closed their season with a spectacular production of Cavalleria Rusticana.

He has also featured with the Colorado Symphony Orchestra, recording Bela Fleck’s Second Concerto for Banjo and Orchestra “Juno Concerto“, and conducted the MGD CD release of the Nielson, Francaix and Debussy Clarinet Concertos with talented young clarinettist Vladimir Soltan and the Hamburg Symphony Orchestra.

Maestro Gomez was the principal conductor of the Orchestra 1813 Teatro Sociale di Como between 2012 and 2015 where he curated a new symphonic season, which resulted in a new and enthusiastic audience, conducting concerts to full houses.  He is Musical Director of the Tucson Symphony Orchestra where his contract has been extended to the end of the 23/24 season.

“Overall, the night was transfixing. The NSO layered sound beautifully, Ma, D’Rivera, and Yang infused their energy into every note, and Gomez connected the audience to the depth of the music…a brilliant program.”

“And all of this was being elicited by a conductor who was new to me: Jose Luis Gomez. Remember that name. This Venezuelan-born conductor is the real deal. And I daresay I’ve had a lifetime training in detecting real-deal conductors. Maestro Gomez seemed to contain the entire Kaddish score inside his body; I never heard a more rhythmically visceral performance.”

“This is a fine, fun, and talented ensemble, whose love for its conductor is expressed in how well they respond to his exuberant, expressive direction.”

“As the final notes faded into the hall, everyone on stage, from Gomez to the percussionists froze. The string players held their bows to the strings, the wind section rested their instruments on their lips. No one moved a muscle; it was completely still for what seemed like a minute… When Gomez and the orchestra lowered their heads, the applause machine roared into action and the audience bolted to its feet.”

“Throughout the conductor and the orchestra were so intrinsically in sync that they seemed like a long married couple that finishes one another’s sentences. By the end of the symphony, Gomez needed only shrug a shoulder or turn towards the musicians to get them to respond with glorious results. “

“Particularly noticeable was Gomez’s skill in creating seamless transitions of dialogue between soloist and orchestra, and overall instrumental balance.”

“(Gomez) drew a performance of energy, clarity and vigour from the players, who already have a great pedigree in Shostakovich.  The opening string recitative dripped with vibrato, pregnant with expectation, and throughout there was a clear narrative edge to the sound, be it in the bite of the violins in the faster passages or the skirl of the woodwinds as they strained at the leash.”

“The Tucson Symphony Orchestra conductor was mesmerizing to watch as he coaxed sublime music from the musicians in the opening concert of his inaugural season.”
Kathleen Allen, Arizona Daily Star, Sep 23rd 2017

“The evening opened with the concert overture The Hebrides […]. Under the energetic baton of José Luis Gomez, the musicians offered the audience a moment full of poetry and naturalness, during which the romanticism permeated every corner of the hall. “

“As the final notes faded into the hall, everyone on stage, from Gomez to the percussionists froze. The string players held their bows to the strings, the wind section rested their instruments on their lips. No one moved a muscle; it was completely still for what seemed like a minute… When Gomez and the orchestra lowered their heads, the applause machine roared into action and the audience bolted to its feet.”

“Throughout the conductor and the orchestra were so intrinsically in sync that they seemed like a long married couple that finishes one another’s sentences. By the end of the symphony, Gomez needed only shrug a shoulder or turn towards the musicians to get them to respond with glorious results. “

“The playing was superb, highlighted by a beautiful grading of dynamics and sure sense of drama and no little subtlety under the highly sympathetic conducting of Venezuelan born conductor Jose Luiz Gomez, a conductor of real quality.”

“The conductor José Luís Gomez was the star of the evening”

“Gomez is a musician’s musician, a conductor possessed with abundant talent and the ability to convey his vision with subtle fluidity. Small gestures led to giant musical statements in Carl Nielsen’s Symphony No. 2 “The Four Temperments.” He drew down the third movement to a near whisper then silenced the orchestra with a flick of the wrist; everyone on stage froze and remained that way, bows raised to the strings, motionless, for several seconds before resuming the final thrilling movement… Gomez brought out in the orchestra a freshness and vibrancy that sometimes gets lost in the day-to-day of performing. His conducting was measured and taut, yet fluid and flexible, as if the orchestra and conductor were performing as an extension of one another. And for us in the audience, that was pretty thrilling.”

“The dynamic maestro has been making major international waves … He led the players throughout the dramatic one-movement work [Mendelssohn, Overture to The Fair Melusina] with graceful fluidity, imbuing it with poetic sensibility and an intuitive musicality.”

“The music was so beautiful that one wished every movement could be extended or even repeated … Gomez possesses the art of launching melodic lines that move in fluid waves. The themes were exposed and developed with precision. Nuances were executed with subtlety and expressiveness. With economic gestures, Gomez was in perfect control from beginning to end. “

“…a high quality musical performance, under the leadership of Jose Luis Gomez … from the beautiful performance of the overture, conducted with a lightness of phrasing and a variety of colours, it was obvious that we were facing a baton of great talent … really top-notch conducting.”

“A lot of spark: everything had the highest entertainment quality, particularly since the musical side shined so much. Under the baton of José Luis Gomez, it sounded not only wonderfully elegant from the pit, but also from the performers on-stage, where the singers offered a fine, ornamented bel canto tradition.”

“Jose Luis Gomez made the performance vital and compelling.”

“Gómez conducted in a clear, transparent style much to the service of the drama and of the singers, and without apparent historical or philological pretensions … It should not be forgotten that the Museumorchester is one of the finest opera orchestras in Germany and Gomez knows that he can allow himself to highlight its sound through his adjustments, rhythmic oscillations and some beautiful and illuminating pauses … In this style, as one would expect from a conductor of his age in the current day, Gomez offers us an interpretation that stems from his effortless listening and his unprejudiced study of an entire century’s worth of interpretive traditions of La Boheme, most likely assisted by his own experience as orchestral violinist … What does seem relevant is that Gomez has demonstrated dramatic intuition and talent in service to the drama, as well as a great ability for vocal accompaniment, which was clearly appreciated by the singers and was rewarded by the audience’s applause. “

“The young Spaniard Jose Luis Gomez, winner of the 2011 Sir George Solti Conducting Competition, led the Frankfurt Opera and Museum’s Orchestra and set a standard of sensitive transparency, dynamic vitality and lovingly impressionistic moods underlined with the brilliantly predisposed and excellent playing of the orchestra.”

“Spanish Conductor José Luis Gomez and the orchestra made it sound youthful and spring-like.”

“The conductor Jose Luis Gomez-Rios’s musically vibrant and very generous capacity won over the excellent young orchestra, by involving their intense participation, and at the same time gained favor with the public, thus confirming his great possession of rich and flexible competence and positive communication.”

“Guest conductor Jose Luis Gomez, a Venezuelan-born, Spanish conductor, in his debut with the Grand Rapids Symphony, led an exhilarating, engaging performance […] Gomez boldly sallied forth, the captain of a ship at the helm, the crew following close behind. […] Gomez wove a tapestry of sound, one color thread for triumph, another for tragedy. Principal hornist Richard Britsch played brilliantly in the second movement, the entire orchestra following suit, pretty melodies given their due.” 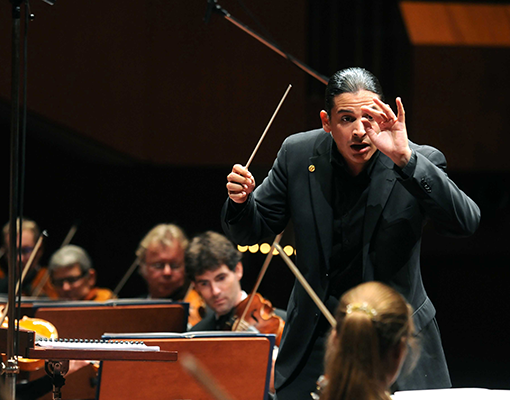 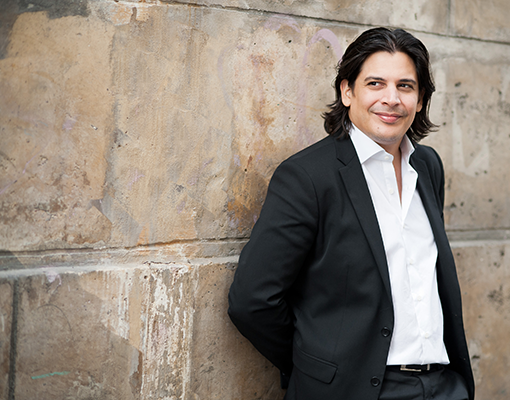 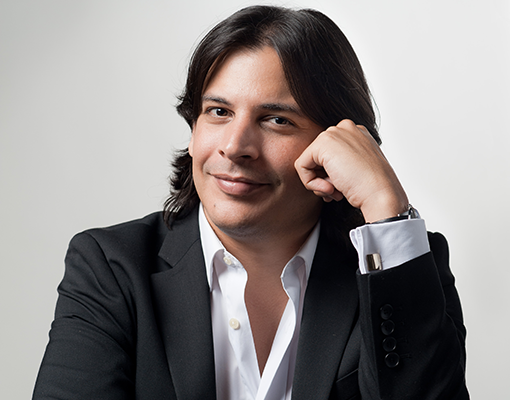 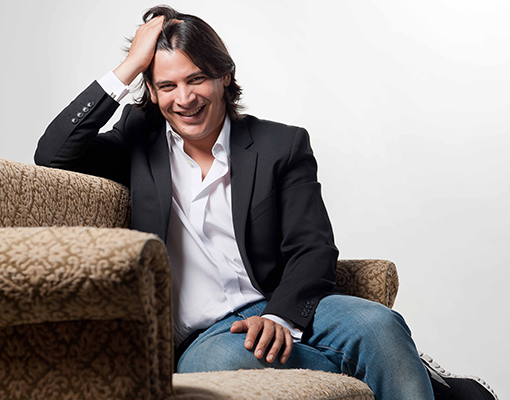 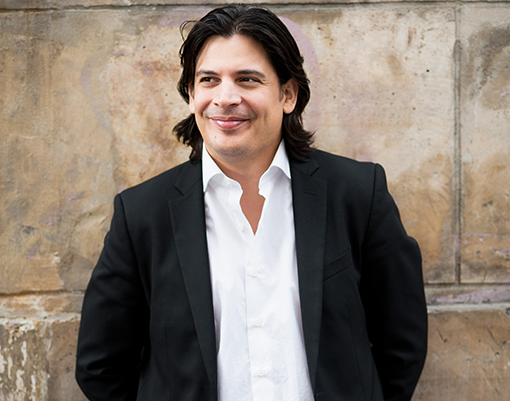