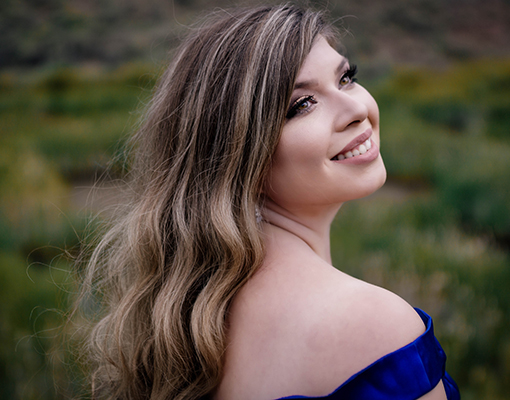 American mezzo-soprano Katherine DeYoung, whose voice has been described by Opera News as “lustrous” is in her third and final year as part of the the Patrick G. and Shirley W. Ryan Opera Center at the Lyric Opera of Chicago. There, she will sing Giovanna in Ernani, conducted by Music Director Enrique Mazzola to open the season, and later, will sing Mercedes in Carmen. Other projects include covering Hansel in Hansel und Gretel and Ragonde in Le Comte Ory. Previous seasons at the Lyric have included performances as the Second Lady in Barrie Kosky’s famed Magic Flute, as well as Lyric’s annual Rising Stars concerts, a special virtual program entitled Sole e Amore with Enrique Mazzola as pianist, a program entitled Magical Music Around the World, and several art song recordings and broadcasts through Chicago’s local classical music station, WFMT. Recent projects outside of Lyric include Verdi’s Requiem with Michigan State University.

As a member of the Michigan Opera Theater (now Detroit Opera) Studio program, Ms. DeYoung performed the Sandman in Hansel und Gretel, the Old Lady in Candide, The Mother in Amahl and the Night Visitors, and covered Olga in Eugene Onegin and Ma Joad in The Grapes of Wrath, while also performing Mae. In 2018 and 2019, she was an Apprentice with the Santa Fe Opera where she covered the role of The Mayor’s Wife in Jenůfa and performed the Act One Duet from La Favorita and Ma Joad for the Apprentice Scenes programs.

A Traverse City, Michigan native, Katherine holds an undergraduate degree in voice from Michigan State University and a Master’s Degree in Voice Performance from the University of Houston where she performed Isabella in L’Italiana in Algeri, Fidalma in The Secret Marriage, Gertrude in Roméo et Juliette, Elizabeth Proctor in The Crucible, and Lady Sneerwell in the world premiere of The School for Scandal. She also performed the title role in Carmen with Opera in the Ozarks. While in Houston, Katherine appeared with the Texas Medical Center Orchestra for their Night at the Opera concert and was the mezzo-soprano soloist for Chapelwood United Methodist’s Messiah. Ms. DeYoung was a Finalist and The Online Viewers’ Choice Award Winner in the Houston Grand Opera’s 31st Eleanor McCollum Competition, a 2020 Semi-finalist for the Metropolitan Opera Laffont Competition, a 2019 Sullivan Award Winner from The Sullivan Foundation and a 2021 Richard F. Gold Career Grant recipient from the Shoshana Foundation. 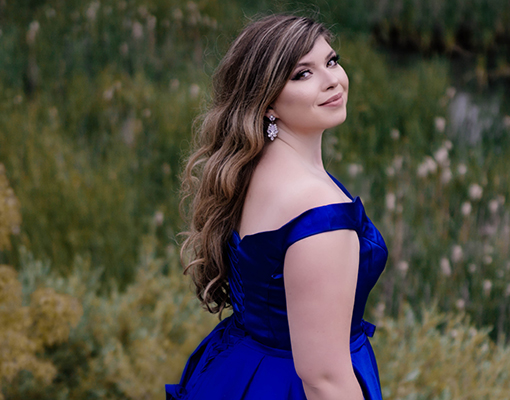