National Symphony Orchestra of Ukraine is not represented by IMG Artists 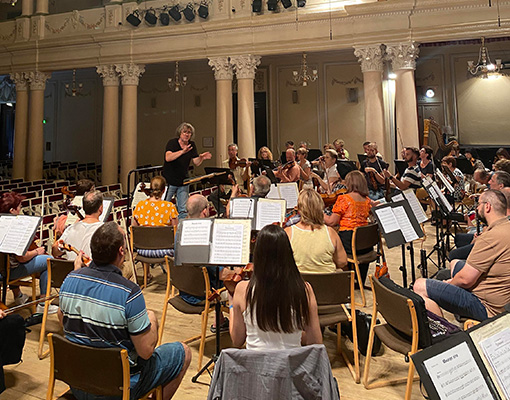 Formed by Council of Ministers of Ukraine in November of 1918, the National Symphony Orchestra of Ukraine is considered to be one of the finest symphony orchestras in Eastern Europe. Its first conductor was Oleksander Horilyj, followed by Natan Rachlin, who  was their Artistic Director betweem 1937 until 1962. Stefan Turchak, Volodymyr Kozhuchar, Fedir Hlushchenko, Igor Blazhkov and Theodore Kuchar have all since held the position of the  Orchestra’s Principal Conductor. Other conductors who have worked with the NSOU include Leopold Stokowski, Igor Markevitch, Kurt Sanderling, Evgeny Mravinsky, Kiril Kondrashin, Evgeny Svetlanov, and Gennady Rozhdestvensky. Volodymr Sirenko has been Artistic Director and Chief Conductor since April 1999. In June 2006, Alexander Hornostai  joined the orchestra as Managing Director and Producer.

Since 1993, the NSOU has released more than 100 recordings including both Ukrainian and international repertoire many of which have received the international acclaim. In 1994, the Australian Broadcasting Company (ABC) rated NSOU’s recording of Boris Lyatoshynsky’s Symphonies No. 2 and No. 3 as “The Best Recording of the Year”. The recording of Silvestrov’s “Requiem for Larissa” was nominated for a Grammy Award in 2005 and the recording of Bloch and Lees’ Violin Concertos was nominated for a Grammy Award four years later. 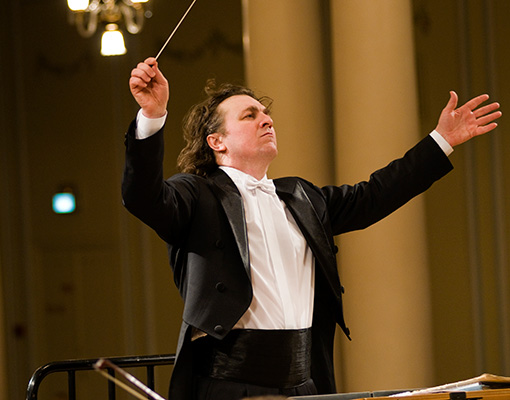 Born in the Poltava region of Ukraine, Volodymyr Sirenko has been compared by the international press to other brilliant conductors such as Esa-Pekka Salonen and Simon Rattle.

His conducting debut took place at the Kyiv Philharmonic Hall in 1983 with works by Stravinsky, Schoenberg and Boulez. In 1989 Sirenko graduated from the Kyiv Conservatoire where he studied conducting under Professor Allin Vlasenko. In 1990, he was a finalist at the International Conducting Competition in Prague. A year later, he was appointed as Chief Conductor and Artistic Director of the Ukrainian Radio Symphony Orchestra, a position which he held until 1999. During this period, he made over 300 recordings that are now in the keeping of the Ukrainian Radio and include Mozart Symphonies Nos. 38 and 41, Beethoven Symphony No. 9, Brahms A German Requiem, Rachmaninov Bells, Dvorak Symphonies Nos. 7 and 9.

Since 1999, he has been the Artistic Director and Chief Conductor of the National Symphony Orchestra of Ukraine. Amongst the hundreds of programmes  he has performed with the orchestra, highlights include  cycles of Mahler’s  Complete Symphonies, all four of Bach’s Passions and Mass in B Minor and Lyatoshynsky’s Complete Symphonies. So far he has made 50 recordings and the CD of Silvestrov’s Requiem for Larissa was nominated for a Grammy Award in 2005. He has premiered many works by Ukrainian composers  over the years including Silvestrov’s Symphonies No. 7 and 8, Stankovych’s Symphony No. 6.

Volodymyr Sirenko is a People’s Artist of Ukraine and laureate of the Taras Shevchenko National Prize, Ukraine’s most prestigious award. He is also Professor of Opera and Symphonic conducting at the National Music Academy of Ukraine. 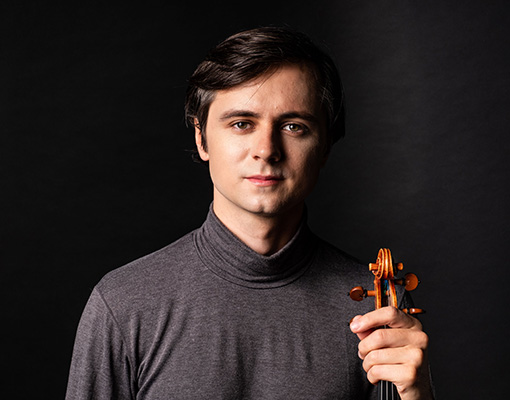 The refined, impassioned and commanding playing of Ukrainian violinist Aleksey Semenenko identify him as inheritor of the great Odessa violin tradition and earnt him places on both the BBC New Generation Artists scheme and Young Concert Artists in New York, bringing him to the attention of audiences across Europe and the US.

He has given recitals at Snape Maltings, Wigmore Hall, the Kennedy Center and Alice Tully Hall, and performed concertos with orchestras including BBC National Orchestra of Wales, BBC Philharmonic, Deutsches Symphonie-Orchester Berlin, Seattle Symphony, Orchestra of St Luke’s, National Orchestra of Belgium, Ulster Orchestra, Kyiv Symphony and the Royal Concertgebouw Orchestra. His festival performances include invitations at the Hay, Cheltenham and Edinburgh festivals.

The most recent addition to Semenenko’s discography is his new album ‘Crossroads’ on BIS, with pianist Artem Belogurov, featuring sonatas by Previn, Schemmer and Gay. The launch of the album was marked by a Wigmore Hall recital in which the duo performed a selection of American works.

Semenenko began his violin studies at the age of six with Zoya Mertsalova at the Stolyarsky School, making his solo debut with orchestra only a year later with the Odessa Philharmonic. He completed his studies with Zakhar Bron and Harald Schoneweg at Cologne’s Hochschule für Musik and was a prize winner in the 2015 Queen Elizabeth Violin Competition. Alongside his performing career, Semenenko is Violin Professor at the Folkwang Universität der Künste. He is kindly supported by the Deutsche Stiftung Musikleben. 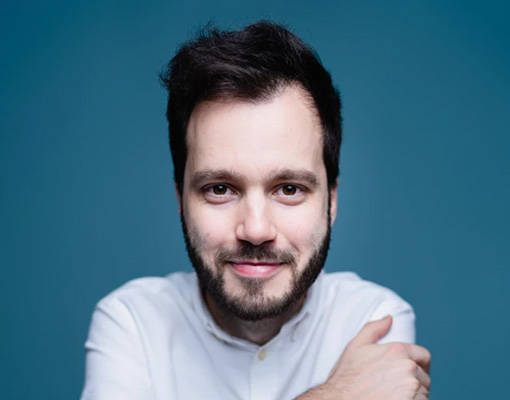 Born in Kyiv, Ukraine in 1988, Baryshevskyi started playing the piano at the age of seven. He graduated from the National Music Academy of Ukraine and École Normale de Musique de Paris where he studied with Professors Valerii Kozlov and Marian Rybicki. He also trained under Alina Sorkina, Ryta Donskaya, and Lily Dorfman.

Baryshevskyi has been a guest at renowned festivals such as Progetto Martha Argerich, Klavier Ruhr Festival, Busoni Festival, and Musica Insieme Fondazione’s projects.

Antonii has also performed in many famous concert venues around the world, such as Wigmore Hall, Konzerthaus Berlin, Berliner Philharmonie, Kölner Philharmonie, The Royal Concertgebouw, and Teatro Comunale di Bologna. Previous international performances include concerts in many European countries, Israel, Japan, South Korea, and the USA.

Orchestras Antonii has previously performed with include Munich Radio Orchestra, The Israel Philharmonic Orchestra and Filarmonica Arturo Toscanini under the baton of maestros Asher Fisch, Frederic Chaslin, Howard Griffiths, Oksana Lyniv and Volodymyr Sirenko, amongst others.