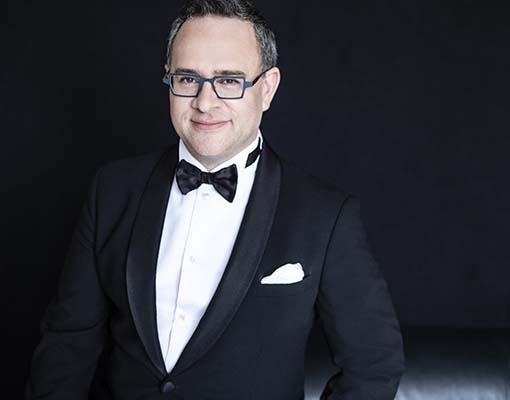 In the 2021-2022 season, American bass-baritone Patrick Carfizzi marks the twenty-second anniversary of his Metropolitan Opera debut by returning to the company as the Sacristan in Tosca, conducted by Yannick Nézet-Séguin, the Speaker in The Magic Flute, and the Lackey in Ariadne auf Naxos. Last season, he returned to Santa Fe Opera as both Bartolo in Le nozze di Figaro and Starveling in A Midsummer Night’s Dream, returned to San Diego Opera to reprise his celebrated Dr. Bartolo in Il barbiere di Siviglia, and sang Dr. Dulcamara in L’elisir d’amore in a recording made with Seattle Opera. He had also been scheduled to join the Metropolitan Opera as Dr. Bartolo in Il barbiere di Siviglia, Houston Grand Opera as Don Magnifico in La Cenerentola, and Arizona Opera as Dr. Dulcamara.

During the 2019-2020 season, Mr. Carfizzi returned to the Metropolitan Opera as the Speaker, Brander in La damnation de Faust, conducted by Edward Gardner, and the Sacristan in the New Year’s Eve gala featuring Anna Netrebko and conducted by Yannick Nézet-Séguin. He also returned to Minnesota Opera as Dr. Bartolo in Il barbiere di Siviglia, and had been scheduled to sing Dr. Dulcamara at the Hessisches Staatstheater Wiesbaden.

Mr. Carfizzi made his Metropolitan Opera debut in 1999 and has performed over 300 times with the company in a variety of roles, including Schaunard in La Bohème, which was broadcast on the Live in HD series to movie theaters around the world, the Jailer in John Dexter’s production of Dialogues des Carmélites, Masetto in Don Giovanni, Haly in L’italiana in Algeri, Brander in La damnation de Faust, Peter Quince in Tim Albery’s production of A Midsummer Night’s Dream, and Frank in Jeremy Sams’ new production of Die Fledermaus. Other Met productions include Le nozze di Figaro, Turandot, and Gianni Schicchi.

Mr. Carfizzi made his European debut with Oper Köln as Leporello in Don Giovanni and reappeared with the company as Fra Melitone in La forza del destino. He made his role and company debut as the title role in Don Pasquale with the Hessisches Staatstheater Wiesbaden, and later returned as the title character in gala performances of Le nozze di Figaro.

Orchestral highlights of Mr. Carfizzi’s recent seasons include performances with the St. Louis Symphony of Brahms’ Ein deutsches Requiem and Vier ernste Gesänge, under the baton of Markus Stenza, as well as Britten’s Peter Grimes under the baton of David Robertson, performed both in St. Louis’ Powell Hall and New York City’s Carnegie Hall in commemoration of the composer’s 100th birthday. Past concert work includes performances of Handel’s Messiah with the San Francisco Symphony, Maria Stuarda with the Washington Concert Opera, and Janáček’s Glagolitic Mass with the Seattle Symphony. He has performed with The Opera Orchestra of New York, Washington Concert Opera, and the Mostly Mozart Festival. Notable conductors with whom Mr. Carfizzi has worked include James Levine, Louis Langrée, Marco Armiliato, Vladimir Jurowski, Plácido Domingo, and Philippe Jordan.

Mr. Carfizzi is a graduate of the Yale University School of Music and the winner of several prestigious awards including the Richard Tucker Career Grant Award, the George London Award, the Sullivan Foundation Award, The Richard F. Gold Career Grant from The Shoshana Foundation, and the Sergio Franchi Memorial Scholarship from the National Italian American Foundation. He also participated in the Metropolitan Opera National Council Auditions where he was the Connecticut District Winner.

“Arguably the show’s very finest singing came from the accomplished Bartolo, Patrick Carfizzi…Mr. Carfizzi’s impressive bass is as powerful as it is handsome. Make no mistake, he certainly knows how to use a full arsenal of buffo vocal tricks and colors to nail his laughs and etch his scheming Don, but then he can suddenly take our breath away with a finely sung declamation that is remarkably elegant.”

“Patrick Carfizzi — wonderful comic actor and fine singer who knew how, when it made sense, to draw on Rossini’s vocal ornamentation to considerable comic effect.”

”Mr. Carfizzi has a substantial, mellifluous bass that shone splendidly in his Act II aria, which was a virtual feast of sonorous tone and characterful nattering. As a shameless, rubber-faced, loose-limbed comedian, Patrick also evinced some of the evening’s best laughs.”
Opera Today, James Sohre

“The standout of the supporting cast was the delightfully harried sacristan of Patrick Carfizzi who brought a voice of rare fullness and color for a comic baritone role.”
New York Classical Review, Eric Simpson

“Carfizzi brings down the house with the impeccable “Pirates” patter-song, “Modern Major General,” but he also gets to display his rich bass-baritone in his second act pastoral aria, “Sighing Softly to The River.”
Times of San Diego, Pat Launer

“The singing is strong throughout the lead roles, but it’s bass-baritone Patrick Carfizzi who steals the show as Major-General Stanley. Besides breezing through the rapid-patter song “I Am the Very Model of a Modern Major-General,” Carfizzi hilariously trots and high-steps and pirouettes around the stage as he sings.”
San Diego Union Tribune, Pam Kragen

“The agent who drives the romantic intrigues, an older gentleman named Don Alfonso, becomes a professor, and it works brilliantly. The role is taken by bass-baritone Patrick Carfizzi, who relishes in Alfonso’s chicanery throughout the proceedings. Carfizzi’s command of the comic bass style is unassailable.” The Daily Camera, Kelly Dean Hansen

“Patrick Carfizzi brought his considerable talents to the role of Brander in his Act One aria. He brings great style to everything he sings.” Broadway World, George Weinhouse

“Brander, a student who frequents the tavern in Leipzig, makes only one appearance, but Patrick Carfizzi stood out in his brief time on stage. He offered a viscous, warm bass-baritone and sly comic instincts in his delivery of the Song of the Rat.”  New York Classical Review, Eric C. Simpson

“Arguably the show’s very finest singing came from the accomplished Bartolo, Patrick Carfizzi…Mr. Carfizzi’s impressive bass is as powerful as it is handsome. Make no mistake, he certainly knows how to use a full arsenal of buffo vocal tricks and colors to nail his laughs and etch his scheming Don, but then he can suddenly take our breath away with a finely sung declamation that is remarkably elegant.”

“Patrick Carfizzi — wonderful comic actor and fine singer who knew how, when it made sense, to draw on Rossini’s vocal ornamentation to considerable comic effect.”

“Carfizzi’s performance is worth the price of the ticket and will be remembered as a role-defining portrayal of Dr. Bartolo. – Central City Opera, Barber of Seville “

“Patrick Carfizzi, the warm bass who sang the role of Mary’s friend and adviser Talbot, sang with a rich sound and complete emotional involvement so that his character sprang to life. “

“As Figaro, Patrick Carfizzi displayed a robust and rich voice with the ability to produce powerful and delicately sweet sounds, along with the dramatic skill to convincingly portray Figaro’s complex character.”

“In the role of Papageno…bass-baritone Patrick Carfizzi nearly steals the evening with not only his voice, but his onstage shtick that adds to the comic nature of the role and gets the biggest laughs in the piece.”

“Patrick Carfizzi created a delightfully pompous Dr. Bartolo, who boiled with frustration in his vain attempts to stop Rosina from meeting Almaviva. During the singing lesson in Act II, Carfizzi used his incredible falsetto and an incredibly silly impromptu dance to cause laughter to cascade from all corners of the hall.”

“Patrick Carfizzi (HGO fans will remember his stunning performance as Swallow in Peter Grimes), a Figaro who is simultaneously animated and confident. There has to be sex appeal in this part, and Carfizzi most certainly possesses it.”

“Patrick Carfizzi brought a sonorous bass-baritone to the role of Kissinger and lascivious relish to his alter ego.”