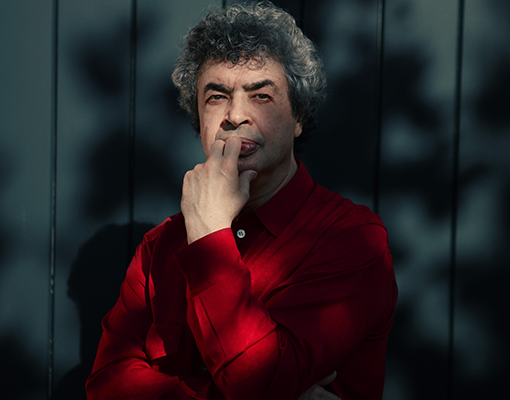 “That this is the first instalment in a projected Mahler symphony cycle from Bychkov, a conductor with an unimpeachable feel for exquisitely proportioned, emotionally acute interpretations, bodes more than well for what is to follow. It carries itself with the invigorating sense that Bychkov ‘gets’ Mahler in all his contrary multitudes and is hungry for more…” – Limelight, June 2022

Celebrating both his fifth season as Chief Conductor and Music Director of the Czech Philharmonic and his 70th birthday, Semyon Bychkov will celebrate his birthday with three concerts in November pairing Beethoven’s Fifth with Shostakovich’s Fifth. It is a season which opens in Prague with the official concert to mark the Czech Republic’s Presidency of the EU and continues with concert performances of Dvořák’s Rusalka as part of the Dvořákova Prague International Music Festival. Later in the season, Bychkov will conduct Rusalka at the Royal Opera House, Covent Garden.

Bychkov’s inaugural season with the Czech Philharmonic was celebrated with an international tour that took the Orchestra from performances at home in Prague to concerts in London, New York, and Washington. The following year saw the culmination of The Tchaikovsky Project – the release of a 7-CD box set devoted to Tchaikovsky’s symphonic repertoire and a series of international residencies. Bychkov also instigated the commissioning of 14 new works to be premièred by the Orchestra over subsequent seasons.

In the past two seasons, the focus of Bychkov’s work with the Czech Philharmonic has turned to the music of Gustav Mahler with performances of the symphonies at the Rudofinum, on tour and ultimately on disc. This season, the Orchestra will tour extensively featuring symphonies by Mahler at the Edinburgh International Festival, Leipzig’s Gewandhaus Mahler Festival, and in Paris, Luxembourg, Graz, Vienna, Budapest and Milan. PENTATONE’s complete Mahler cycle with Bychkov and the Czech Philharmonic launched in spring 2022 with Mahler’s Symphony No. 4 and continues this autumn with the release of Mahler’s Symphony No. 5.

Especially recognised for his interpretations of the core repertoire, Bychkov also worked closely with many extraordinary contemporary composers including Luciano Berio, Henri Dutilleux and Maurizio Kagel. More recent collaborations include those with Julian Anderson, Bryce Dessner, Detlev Glanert and Thomas Larcher whose works he has premièred with the Czech Philharmonic, and with the Vienna, Berlin, New York and Munich Philharmonics, Royal Concertgebouw and the BBC Symphony Orchestra.

In common with the Czech Philharmonic, Bychkov has one foot firmly in the culture of the East and the other in the West. Born in St Petersburg in 1952, Bychkov emigrated to the United States in 1975 and has lived in Europe since the mid-1980’s. Singled out for an extraordinarily privileged musical education from the age of 5, Bychkov studied piano before winning his place at the Glinka Choir School where, aged 13, he received his first lesson in conducting. He was 17 when he was accepted at the Leningrad Conservatory to study with the legendary Ilya Musin and, within three years had won the influential Rachmaninov Conducting Competition. Denied his prize of conducting the Leningrad Philharmonic, Bychkov left the former Soviet Union.

By the time Bychkov returned to St Petersburg in 1989 as the Philharmonic’s Principal Guest Conductor, he had enjoyed success in the US as Music Director of the Grand Rapids Symphony Orchestra and the Buffalo Philharmonic. His international career, which began in France with Opéra de Lyon and at the Aix-en-Provence Festival, took off with a series of high-profile cancellations which resulted in invitations to conduct the New York Philharmonic, Berlin Philharmonic and Royal Concertgebouw Orchestras. In 1989, he was named Music Director of the Orchestre de Paris; in 1997, Chief Conductor of the WDR Symphony Orchestra Cologne; and the following year, Chief Conductor of the Dresden Semperoper.

On the concert platform, the combination of innate musicality and rigorous Russian pedagogy has ensured that Bychkov’s performances are highly anticipated. In the UK, in addition to regular performances with the London Symphony Orchestra, his honorary titles at the Royal Academy of Music and the BBC Symphony Orchestra – with whom he appears annually at the BBC Proms – reflect the warmth of the relationships. In Europe, he tours with the Royal Concertgebouw Orchestra and Munich Philharmonic, as well as being a frequent guest of the Vienna and Berlin Philharmonics, the Leipzig Gewandhaus, the Orchestre National de France and the Accademia Nazionale di Santa Cecilia; in the US, he can be heard with the New York Philharmonic, Chicago Symphony, Los Angeles Symphony, Philadelphia and Cleveland Orchestras.

Bychkov made extensive recordings for Philips with the Berlin Philharmonic, Bavarian Radio, Royal Concertgebouw, Philharmonia, London Philharmonic and Orchestre de Paris. His 13-year collaboration (1997-2010) with WDR Symphony Orchestra Cologne produced a series of benchmark recordings that included works by Strauss (Elektra, Daphne, Ein Heldenleben, Metamorphosen, Alpensinfonie, Till Eulenspiegel), Mahler (Symphony No. 3, Das Lied von der Erde), Shostakovich (Symphony Nos. 4, 7, 8, 10, 11), Rachmaninov (The Bells, Symphonic Dances, Symphony No. 2), Verdi (Requiem), a complete cycle of Brahms Symphonies, and works by Detlev Glanert and York Höller. His recording of Tchaikovsky’s Eugene Onegin was recommended by BBC’s Radio 3’s Building a Library (2020); Wagner’s Lohengrin was BBC Music Magazine’s Record of the Year (2010); and Schmidt’s Symphony No. 2 with the Vienna Philharmonic was BBC Music Magazine’s Record of the Month (2018). Of The Tchaikovsky Project released in 2019, BBC Music Magazine wrote, “The most beautiful orchestra playing imaginable can be heard on Semyon Bychkov’s 2017 recording with the Czech Philharmonic, in which Decca’s state-of-the art recording captures every detail.”

In 2015, Semyon Bychkov was named Conductor of the Year by the International Opera Awards. He received an Honorary Doctorate from the Royal Academy of Music in July 2022.

Bychkov was one of the first musicians to express his position on the outbreak of the war in Ukraine, since when he has spoken in support of Ukraine in Prague’s Wenceslas Square; on radio and television in the Czech Republic, France, Germany, Austria, the UK and the USA; written By Invitation for The Economist; and appeared as a guest on BBC World’s HARDtalk.

The BBC Proms are Back!

The BBC Proms are back! The world’s biggest classical music festival features six weeks of live music from 30 July through 11 September. The 52 concerts will be performed in front of live audiences, and be broadcast on BBC TV and radio channels, BBC Sounds and...

Inspired by his lifelong passion for the music of Tchaikovsky, Semyon Bychkov partnered with the Czech Philharmonic three years ago to launch The Tchaikovsky Project, an in-depth multi-season exploration of the composer’s music through concerts and Mr. Bychkov’s...

“From the first trumpet call to the final hectic bars of the crowning rondo, the Kennedy Center audience was in thrall. Quiet and attentive throughout, it exploded with applause at the final chord. Each orchestral section was superb, from high brass (that trumpet again), to solid, musical low brass in perfect ensemble, Mahler’s all-important horns speaking loudly when asked, with the strings, high to low, smooth, singing and powerful, winds inaudible in the tuttis but brightly characterful when Mahler asks for their individual or sectional presence, and, of course, the superb percussion. All responded alertly to Bychkov’s requests from very loud to very soft and all gradations in between. It was amazing to hear subito-pianos and pianissimos so miraculously achieved by so many musicians.

None of this would have made a difference without Bychkov himself on the podium. Yes, the opening funeral cortege was a bit measured, and the movement as a whole, no matter how well conducted (and it was last night), is a bit of a trial. Reaching Parts II and III, the music, conductor, and orchestra came fully into accord: The Scherzo was a delight (if the music is a little long winded, blame the composer), and the Adagietto came across as a love song, not an endless dirge. The humorous Rondo brought out the best from everyone.

So back to the question: which orchestra is the world’s greatest? On this occasion, there was only one correct answer: the Royal Concertgebouw under Semyon Bychkov. Case closed.”

“Bychkov calls the ‘Leningrad’ Symphony ‘a cry from the heart against death’… His interpretation goes wider than anger and despair, though both emotions coursed through every bar. There was, throughout, a sense of historical and cultural continuity under threat. It’s the best thing I’ve heard Bychkov do, and one of the greatest performances of the work in recent years.”

“Each of [this new work’s] four movements is fastidiously shaped, and in each there are outbursts of anarchically dissonant fury. But under Semyon Bychkov’s baton the BBC Symphony Orchestra delivered a superbly detailed performance, with the sudden turns into pastiche-Mahler and pastiche-Bach opening like wondrous flowers in a parched terrain. The rest of this Prom was of a similarly high standard. Mezzo Elizabeth Kulman brought rare grace to Wagner’s Wesendonck-Lieder – the beauty of her ‘Im Treibhaus’ took the breath away – while Strauss’s An Alpine Symphony did all that such high-octane program-music is supposed to do.”

“In the Albert Hall’s generous space Strauss’s colossal aural panoroma of a day’s hike on a Bavarian mountain seemed to have found its natural home. Conductor Semyon Bychkov gave the grand passages the time they needed to glow as well as roar, and he made sure the rare delicate passages really told, like the wonder-struck moment when the climber reaches the summit and is lost for words. Strauss’s symphony was the Prom’s summit in terms of aural splendour, but the Symphony No.2 ‘Cenotaph’ by 53-year-old Austrian composer Thomas Larcher wasn’t far behind. There wasn’t a dull moment in this 35-minute piece, cast in the traditional symphonic four movements. Familiar ideas were made to seem brilliant and new, partly by super-bright orchestration, partly by sheer insistence … In between these two diverting pieces, both huge but somehow weightless, it was good to hear something of real substance. Wagner’s Wesendonck-Lieder are often given a sultry air, as if to reveal the all-too-human erotic feelings behind the mystical sentiments of the poetry. Here mezzo-soprano Elisabeth Kulman gave the songs a lovely chaste quality, supported with the utmost delicacy by Bychkov and the BBC SO, which was surprising and deeply moving.”

“The Philharmonic remains a superb Mahler orchestra more than a century after the composer led it and half a century after Leonard Bernstein secured its Mahler tradition, and Mr. Bychkov made the most of it despite the hall’s intractable acoustics. Nothing was overblown, and the balances among the various sections, especially between brasses and woodwinds, were exquisite … All in all, an excellent outing for orchestra and conductor.” 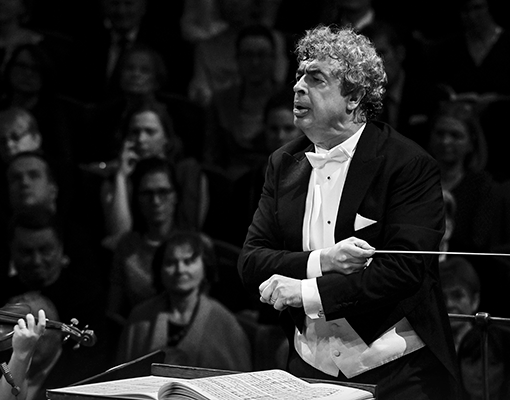 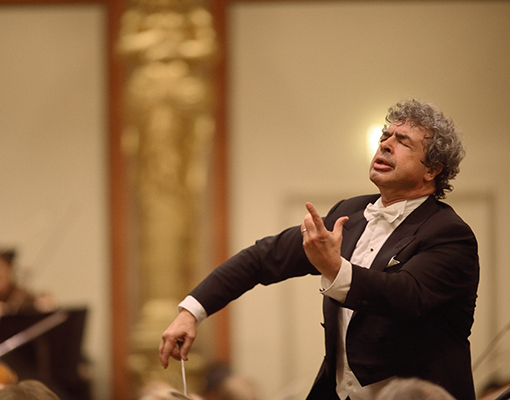 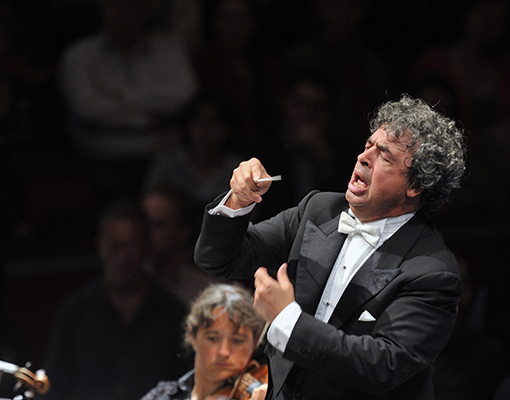