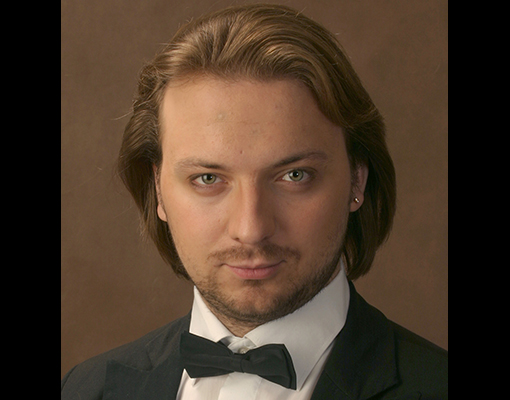 Engagements in season 2020-21 will include Calaf in Turandot at National Theater in Prague, Canio in Pagliacci at Aalto-Musiktheater Essen, debuts both as Des Grieux in Puccini’s Manon Lescaut and Herman in Pique Dame at Bolshoi Theater in Moscow.

In season 2019-20 he also debuted as Loris Ipanov in Fedora at Teatro Massimo Bellini in Catania and Dick Johnson in Fanciulla del West at Estonian National Opera in Tallinn (with Jose Cura as both conductor and director).

His other engagements included both Calaf in Turandot and Canio in Pagliacci at Latvian  National Opera, Herman in  Pique Dame at Deutsche Oper am Rhein in Düsseldort among others.

On December 9 2016 tenor made his Carnegie Hall debut singing tenor part in vocal circle “From Jewish  Poetry” by Shostakovich.

His earlier engagements included Manrico in Il Trovatore and Herman in Pique Dame at the Mariinsky Theatre in Sankt Peterburg, Des Grieux in Manon Lescaut and Macduff in Macbeth at Latvian National Opera in Riga, Manrico in Il Trovatore and Cavaradossi in Tosca at Vilnius City Opera, Radames in Aida, Carlo VII in Gioanna d’Arko,Turiddu in Cavalleria Rusticana, Canio in Pagliacci at the Novaya Opera in Moscow.

Has sung the roles of Calaf in Turandot at the Trondheim Opera in Norway, Oronte in I Lombardi, Prince Andrey Khovansky in Khovanshchina at the Novaya Opera, Sergey in Lady Macbeth of Mzensk at the Rostropovich III International Music Festival in Moscow and tenor part in song cycle “From Jewesh Folk Poetry”.

In the summer of 2010 sang the part of Grigory, the Pretender, in Mussorgsky’s Boris Godunov at the Opera Royal de Wallonie in Liege, Belgium and took part in the Festival Internacional de Santander in Spain. At the Novaya Opera sang Mikhail Tucha in the Made of Pskov.

Since 2009 has been a soloist of Novaya Opera in Moscow, where he has sung Vaudemont in Iolanta, King Charles VII in The Maid of Orleans, Shuisky in Boris Godunov.

From 2005 to 2007 had studied at the Galina Vishnevskaya Opera Centre, where he sang the roles of Vaudemont in Tchaikovsky’s Iolanta, Lensky in Tchaikovsky’s Eugene Onegin and Lykov in Rimsky-Korsakov’s The Tsar’s Bride, and took part in phantasmagorical The Marriage and Other Horrors, dedicated to the 200th anniversary of the birth of Nikolai Gogol. Also had taken part in the “May Opera Nights festival in Macedonia, the Yuri Bashmet Festival in Minsk and has performed concerts in St. Petersburg, Mexico, Azerbaijan and Georgia.

Was born in Moscow and graduated in 2007 from the Russian Academy of Theatrical Art.

“Sergey Polyakov, Loris Ipanov, turned out to be the classic Italian-style tenor, generous in issuing, endowed with a powerful and stentorian voice… was showing a remarkable musicality and sweetness of timbre, especially in the middle register, to give the best of his fiery vehemence and passion…” Opera “Fedora” by Umberto Giordano
Written by Giuliana Cutore on Marh 18 2019
Teatro Massimo Bellini, Catania, March 16  2019
Giuliana Cutore

“… Russian tenor Sergey Polyakov was an excellent Des Grieux, singing with rounded Italianate tone and making the most of his set pieces…”

Seen and Heard International, October 1 2017 - about Manon Lescaut at the Royal Swedish Opera in Stockholm