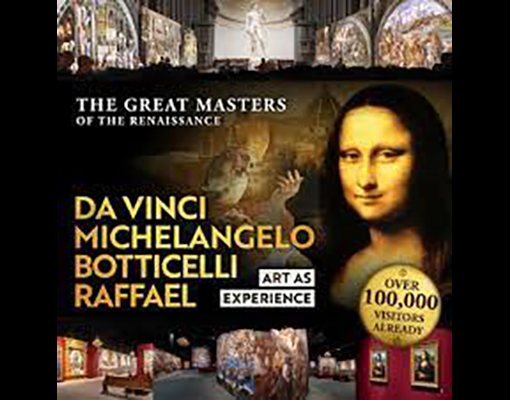 The Great Masters of the Renaissance

Renaissance means “rebirth” and describes the European cultural epoch/era during the period of upheaval from the Middle Ages to the modern era in the 15th and 16th century. It was characterized by the effort to revive the cultural achievements of the Greek and Roman antiquity. Originated in the cities of northern Italy, the artists and scholars of the Renaissance influenced the countries north of the Alps with their innovative paintings, architecture, sculptures, literature and philosophy, however varying up to different degrees. The name “Renaissance” emerged for the first time during the 19th century.

Now, the famous visual universe of Leonardo da Vinci, Michelangelo Buonarroti, Sandro Botticelli and Raffaello Sanzio da Urbino can be experienced in one breathtaking exhibition – The Great Masters of the Renaissance. Faithful reproductions with impressive dimensions are mounted in a thoughtful and unique manner allowing the viewer to explore the Renaissance Period in an authentic and atmospheric way.

There is no other place in the world where art lovers have the opportunity to see such a vast collection of the most important and historic portraits of mankind such as Da Vinci’s “Mona Lisa” and “The Last Supper,” “The Creation of Adam” and “The Last Judgement” by Michelangelo, Botticelli’s “The Birth of Venus,” and Raffaello’s “The School of Athens” and “Sistine Madonna” in their original size, close up, and without navigating extreme crowds.