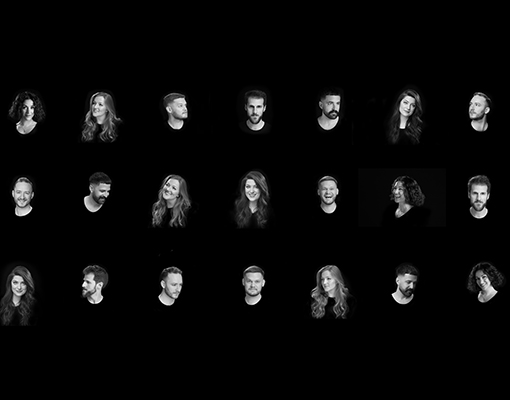 For more than half a century, The Swingles have pushed the boundaries of vocal music. The seven young singers that make up today’s London-based group are driven by the same innovative spirit that has defined the five-time Grammy® winners since they first made waves in the 1960s. At a time when a cappella music is more popular than ever, The Swingles are recognised as masters of their craft.

In 1963, American-born Ward Swingle first assembled a group of Parisian session singers to sing Bach’s keyboard music. The resulting album, Jazz Sebastian Bach, launched the Swingle Singers to fame. Since then, they have won five Grammy® awards and made more than 50 recordings, with a repertoire that has grown to include a huge variety of music, including new original songs. The Swingles have appeared on numerous film and TV soundtracks, including The Two Popes, Sex and the City, Wedding Crashers and Glee, as well as singing the theme for Italy’s beloved TV series Superquark. In 2017, they co-wrote and performed a song for the end credits of Alexander Payne’s film Downsizing. Their prolific output of music videos has earned them millions of views and new audiences around the world.

The group’s versatility has led to collaborations with artists as diverse as the Modern Jazz Quartet, Jamie Cullum and Labrinth. Luciano Berio was one of the first composers to explore the sound of the Swingles’ amplified voices in an orchestral setting with his groundbreaking Sinfonia, first performed in 1968. The group continue to perform the piece around the world, with recent acclaimed performances in San Francisco (with Michael Tilson Thomas), Vienna (with Marin Alsop), London (with Vladimir Jurowski), and at Milan’s La Scala (with John Axelrod).

Throughout the Covid-19 pandemic, The Swingles have maintained a busy schedule of virtual performances, workshops and releases, including their 2021 album Snapshots, Vol. II, which was made almost entirely in isolation. With an accompanying music video released every month, Snapshots is the second collection of tracks made with support from The Swingles’ fans on Patreon and is a testament to the group’s innovative approach. An EP of all-new original songs is planned for release in late 2021.

The group’s touring calendar regularly takes them to North and South America, Europe, Asia and Australasia. After a year like no other, The Swingles look forward to returning to the concert stage ahead of their 60th anniversary season in 2022-23.

The Grammy® award winning The Swingles lifted the spirits of their Patreon #SwinglesSquad throughout 2020 with their celebrated ”stunning reinventions” (The Guardian) of beautiful songs. Now, the ensemble, called, “one of the best close harmony groups in the world” by...

Sing with The Swingles! Join the Stay at Home Choir

Grammy® award-winners The Swingles have been announced as the next guest star ensemble to sing with the Stay at Home Choir. The Stay at Home Choir, created by Tori Longdon and Jamie Wright, is designed to be a musical community that brings like-minded people together...

Introducing the Newest Member of The Swingles: Jamie Wright

The Swingles have welcomed a new baritone, Jamie Wright, to the Grammy® award-winning ensemble. They write: We’d like to introduce you to the new baritone and vocal percussionist for The Swingles: Jamie Wright. We’ve had the pleasure of singing with Jamie at shows in...

”After the interval came Berio’s Sinfonia, for which the LPO was joined by the Swingles, heirs to the original Swingle Singers for whom the work was written … this was a performance of great passion and elan, superbly played and sung”

“Stunning reinventions of songs by the likes of John Martyn, Elbow and Mumford & Sons, with subtle beatboxing and audacious harmonies… superhero singing to truly raise goosebumps.”

“The orchestra and the Swingle Singers…gave a stellar performance, full of color, vitality, and drama.”

“Stunning reinventions of songs by the likes of John Martyn, Elbow and Mumford & Sons, with subtle beatboxing and audacious harmonies… superhero singing to truly raise goosebumps.”

“The orchestra and the Swingle Singers…gave a stellar performance, full of color, vitality, and drama.”

““The vocal and choral world has changed considerably in the last 50 years… But The Swingles have managed to hold onto to their distinctive niche and continue to thrive.” “

““Whether performing with the National Symphony Orchestra or in a cappella settings, The Swingle Singers were never less than dazzling” “