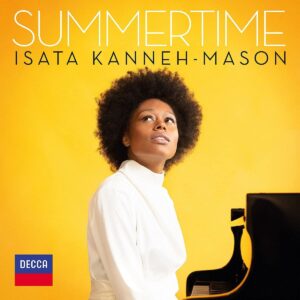 Isata Kanneh-Mason presents her sparkling second album, Summertime, a diverse exploration of the musical landscape of 20th-century America. Following on from her award-winning, debut album Romance, a portrait of Clara Schumann that landed at the top of the UK Classical Chart on its release in 2019, 25-year-oldBritish pianist Isata Kanneh-Mason presents her vibrant second album Summertime, fizzing with her signature virtuosic flair. The album is released on CD and digitally on Decca Classics on 9th July 2021.

Isata says, “I am delighted to be presenting my second solo album Summertime, which features a rich array of pieces from many of my favourite American classical composers. The Barber Piano Sonata forms the anchor around which the rest of the album was developed; I fell in love with the piece thefirst time I heard it, and it’s a real pleasure to have recorded it for Decca. I wanted this album to illustrate the diversity of music in America at that time, and so it was important to me to include the more familiar Gershwin songs, as well as the Samuel Coleridge-Taylor spirituals to which I feel a personal connection.”

Isata takes us on a personal journey through the vivid and spiritual musical landscape of 20thcentury America, with a rich programme anchored around Samuel Barber’s fierce Piano Sonata in E-flat minor, which received its premiere in 1949, performed by Vladimir Horowitz: one of Isata’s great musical influences. The album includes a world premiere recording of Samuel Coleridge-Taylor’s ‘Impromptu No.2 in B Minor’, released 110 years after it was originally published in London. Coleridge-Taylor transcribed a set of folk tunes deriving from West Africa, hoping to showcase the music in the same way as Brahms did for Hungarian music, and Grieg for Norwegian. Coleridge-Taylor’s father was of Sierra Leone heritage, mirroring Isata’s own parentage on her mother Kadiatu’s side.

Earl Wild’s dazzling arrangements of the music of George Gershwin – ‘Summertime’ from his Grand Fantasy on Porgy & Bess plus ‘I Got Rhythm’, the sixth of his seven Virtuoso Etudes – sit alongside the composer’s own ‘Three Preludes’ and Percy Grainger’s concert arrangement of Gershwin’s ‘The Man I Love’. Gershwin’s Three Preludes, published in 1926, epitomise his instantly recognisable classical-meets-jazz style, with bluesy harmonies and syncopated rhythms.

Continuing her quest to champion the music of female composers, Isata has recorded Amy Beach’s tranquil ‘By the Still Waters’, an impressionist miniature first published in 1925. The work contrasts with Aaron Copland’s scampering scherzo ‘The Cat and the Mouse’, premiered a century ago in 1921 –the first work the composer ever had published at the age of 20.

Through the exploration of classic American music for solo piano alongside the spirituals whose roots run deep in American musical culture, Summertime offers an intoxicating celebration of the artists whose ancestries lie on both sides of the Atlantic. With world premieres and rarities presented alongside popular20thcentury works, Isata’s “engaging” (Gramophone) and “beguiling” (Times) virtuosity carries the flame for a new generation of concert pianists at the forefront of recorded music.