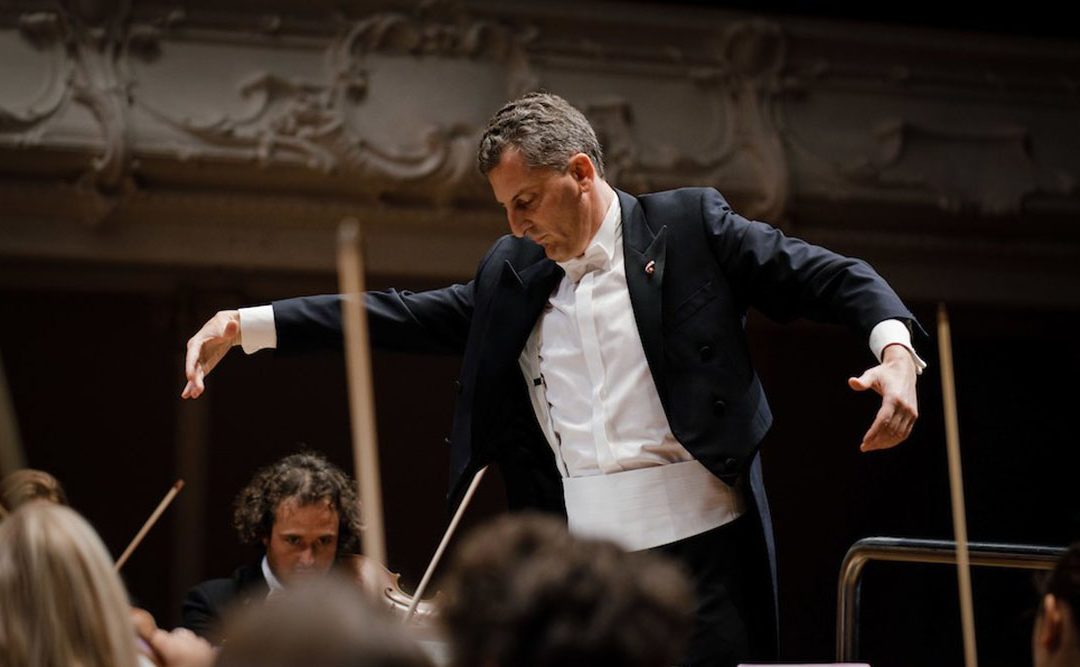 Conductor Giordano Bellincampi has extended his contract with the Auckland Philharmonia in New Zealand for a further three years, taking his tenure up to December 2024. The announcement was made in conjunction with the release of the orchestsra’s 2021 concert season on 8 November.

“We are thrilled that Maestro Bellincampi has agreed to continue as our Music Director. From the first time that Giordano conducted the APO in 2012 and especially since he became Music Director in 2016, there was an obvious chemistry that has taken the orchestra to a new level. Giordano’s detailed work coupled with his extraordinary musical vision has made an enormous impact on the APO” said Barbara Glaser, CEO of the APO. “Our audiences have embraced his passion and obvious love for our country and our city. When we made this announcement at our 2021 season launch on Sunday the response from the audience was spontaneous and heart-warming.”

Maestro Bellincampi was quick to express his enthusiasm for the partnership. “It is a great pleasure working with the APO, we have built a lot of wonderful memories over the years. We approach challenges with the same sentiments, we all believe in the vital role music plays in our lives and amidst this challenging time for our industry we are embracing the opportunity to make new creative choices and let our music-making guide us forward.”

Following an aborted attempt at restarting work with the orchestra in September, when he was granted special dispensation by the New Zealand government, and undertook his mandatory 14-day quarantine, but during the rehearsals for his first concert the lockdown was tightened and the performances had to be cancelled, he returned once again to Auckland last month to see out another two weeks of quarantine. This time fortune held, and he was finally able to lead his orchestra in front of a live audience, for what the New Zealand Herald called a “grand post-lockdown welcome” with “an atmosphere of exhilaration and musical camaraderie” with Bellincampi giving the concertgoers in Auckland’s Town Hall “the troika ride of our lives” in Prokofiev’s 7th symphony.

With the Coronavirus pandemic still causing havoc across most parts of the world, New Zealand is now in the enviable position of being able to present live performances to audiences without restriction.

“We feel so grateful that New Zealand is no longer in lockdown and we are once again able to perform for an audience. The atmosphere in our concert hall has been electric now that we’re back together” says Ms Glaser. “On Thursday 8pm (NZ Time) we will be livestreaming our performance as a gift to music lovers and to our musician colleagues all around the world who are still living without live concerts or in isolation.”

Giordano Bellincampi began his role with the Auckland Philharmonia in 2016, and the latest renewal will take their collaboration through to its 9th year. The 2021 season will see him on the podium for a display of some of his signature Classical and Romantic repertoire, including Brahms’ 3rd, Nielsen’s 4th, Schubert’s 9th, Mendelssohn’s and Mahler’s 5th symphonies , and a concert bookended by his countryman Ottorino Respighi’s glorious orchestral soundscapes ‘Gli Uccelli’ (The Birds) and ‘Vetrate di chiesa’ (Church Windows). Most satisfyingly, he will bring the complete cycle of Beethoven symphonies, which was due to be the centrepiece of the 2020 season for Beethoven’s 250th anniversary year, but fell victim to the virus, and will cap this with a concert performance of Beethoven’s great operatic hymn to justice and liberty, Fidelio, featuring a cast of New Zealand’s star voices including internationally-acclaimed heldentenor Simon O’Neill, sopranos Kirstin Sharpin and Natasha Wilson, and bass Paul Whelan.

Born in Italy and moving to Copenhagen at a young age, Bellincampi has been Principal Conductor of I Pomeriggi Musicali, Milan, Chief Conductor of the Kristiansand Symphony Orchestra, General Music Director of the Duisburg Philharmonic, General Music Director of the Danish National Opera, Aarhus, Music Director of the Copenhagen Philharmonic Orchestra and Chief Conductor of the Athelas Sinfonietta, the leading contemporary ensemble in Denmark. Highlights of recent seasons have included appearances with orchestras around the globe, including the Orchestra Sinfonica Siciliana, Canada’s Victoria Symphony, Estonian National Symphony, Gothenburg Opera and the Royal Danish Opera. His recent work with the Auckland Philharmonia included a gala performance to celebrate the renaming of Auckland’s Kiri Te Kanawa Theatre, a series of hugely popular opera-in-concert performances, including Otello, Aida and Don Giovanni, and a performance of a new horn concerto by Hans Abrahamsen, co-commissioned with the Berlin Philharmonic.