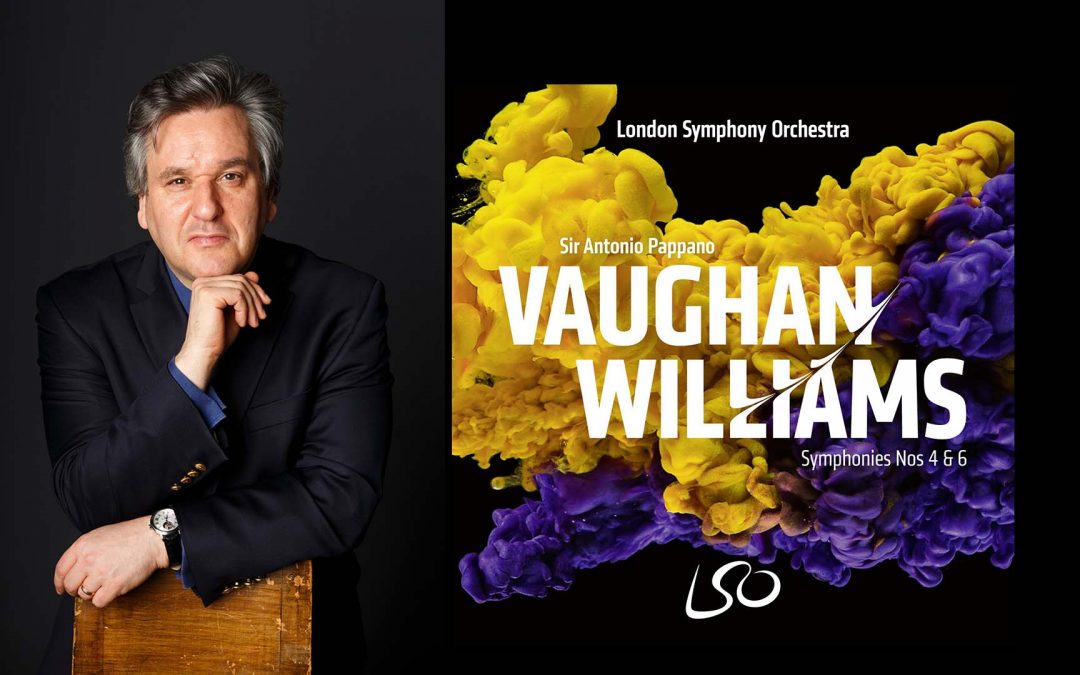 Sir Antonio Pappano and the London Symphony Orchestra celebrate his announcement as its next Chief Conductor, with their tremendous new recording of Vaughan Williams’ Symphonies Nos 4 & 6. Named Recording of the Week in The Sunday Times and on Presto Music, the album is available in stores and online now on LSO Live.

“Pappano’s dramatic, thrustful accounts, vividly recorded, have a momentous, dynamic allure that bodes well for his future tenure, and the orchestra plays this music — the opening bars of the Sixth will recall the 1970s TV drama A Family at War to older listeners — to the manner born. A live Pappano/LSO cycle would be an exciting prospect.” –  Hugh Canning, The Sunday Times, Album of the Week

“If his recent operatic focus was still cause for any doubt that Pappano is every bit a symphonist, this album should dispel such concerns. His recent selection as the LSO’s next Chief Conductor (with Simon Rattle handing over the baton in 2023) surprised many people, myself included, but these two symphony accounts – intelligent yet harrowing – surely vindicate that decision in and of themselves” – David Smith, Presto Music, Recording of the Week

“Well, you’ll have heard the news of Sir Antonio Pappano being appointed Sir Simon Rattle’s successor at the LSO, and an example of Pappano and the LSO at their absolute best just arrived. A searing performance of Vaughan Williams’ Symphony No 4 that pinned me to my seat when we broadcast it live on BBC Radio 3. Here’s the recording, and I have to say it did exactly the same” – BBC Radio 3’s Record Review

“These are cogent and apt approaches, reminiscent in certain ways of John Barbirolli in the 1930s before he succumbed to disappointment and drink. The LSO have had this music in their bloodstream since its inception,” writes Norman Lebrecht on Ludwig van Toronto.

“If you would like a one-word review, that word is “tremendous”. These great Symphonies (both premiered by Sir Adrian Boult) – respectively written either side of World War Two – have found in Sir Antonio a charismatic and insightful interpreter, not afraid to take-off with this powerful music knowing that the LSO will be with him” – Colin Anderson, Colin’s Column

“At a stroke, this new coupling becomes a highly competitive way of experiencing the drama and exhilaration of both works in truly exemplary performances, though some may prefer a brisker reading of the Sixth” – Barry Forshaw, Classical CD Choice

“Blistering performances by the London Symphony Orchestra under conductor Antonio Pappano . . . The LSO under Pappano plays with vigor and sensitivity.” – Kevin Filipski, The Flip Side