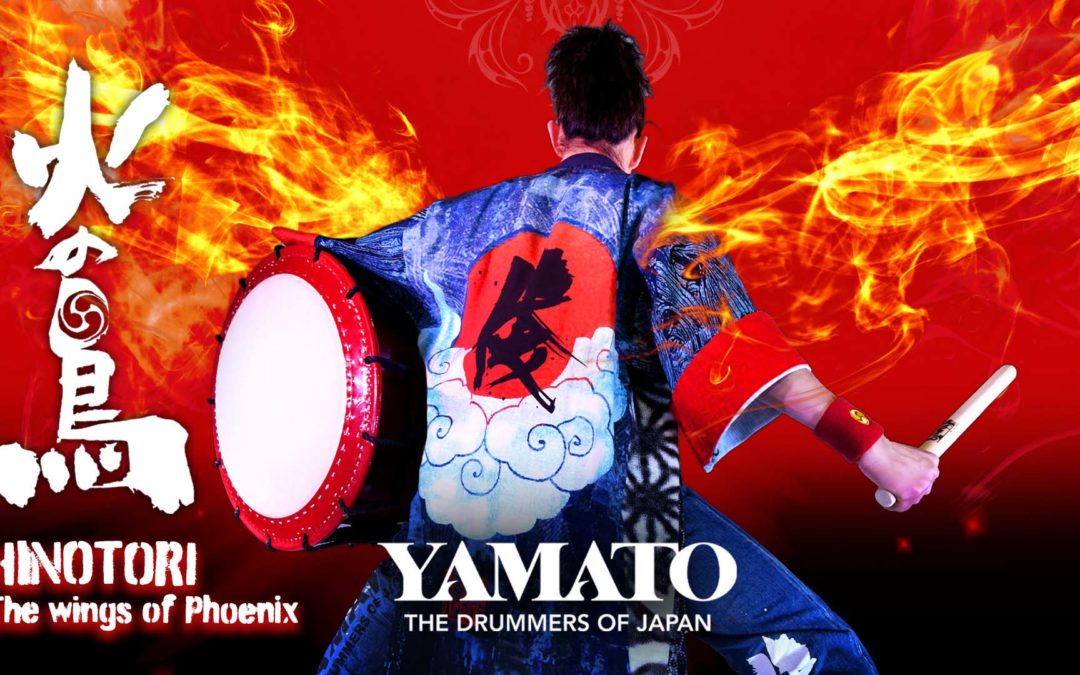 YAMATO: the Drummers of Japan will visit Twenty-Eight North American Cities this February-April with their 30th Anniversary Tour Program
「火の鳥」Hinotori – The wings of Phoenix

From February 14 – April 16, 2023, YAMATO: The Drummers of Japan will tour North America with their new show entitled, 「火の鳥」Hinotori – The wings of Phoenix. This year marks the 30th Anniversary season for the “simply captivating” (The Evening Post) Taiko troupe, who have reached nearly 8 million people globally in over 4,000 performances throughout their history. The troupe brings Hinotori – The wings of Phoenix to twenty-eight venues in Oregon, Washington, California, Idaho, Colorado, Texas, Georgia, South Carolina, Wisconsin, North Carolina, Delaware, Massachusetts, Ohio, Vermont, and Calgary and Toronto, Canada.

The physically powerful troupe of musician-athletes work and live together as a community in the Asuka Village, said to be the birthplace of Japanese culture. There they create their own musical compositions, theater productions, sets, lighting design, choreography, performance techniques, costumes, makeup, stage settings and props. They even make their own bachi sticks used to play the traditional Japanese instruments, beginning each show by hitting a Wadaiko drum weighing half a ton, made from a single piece of wood from a 400-year-old tree.

Since their formation, YAMATO has been committed to preserving and respecting the Taiko tradition, while infusing originality and innovation into the ancient practice. And while the members train rigorously, YAMATO imbues each performance with joy and a sense of fun.

“YAMATO believes that the drumbeat, like the heartbeat, is the very pulse of life and the epitome of the Japanese spirit,” says Founder and Artistic Director Masa Ogawa. “YAMATO uses creativity to convert Wadaiko into a performing art that can reverberate in Japan, Asia, and the rest of the world.”

YAMATO had just begun touring their program, Tenmei – Destiny in 2022 when the troupe – along with the rest of the world – was confronted with closures due to a surge in the COVID-19 pandemic. The drummers returned to the Asuka Village, where they never ceased training and creating together. Hinotori – The wings of Phoenix celebrates the troupe’s strength and ability to rise up despite the challenges it has faced throughout its 30-year history. Ogawa writes:

The dawn is beginning to break again.
Now is the time to get up.

Under the sky, on the Earth

But we did not forget the sun that shone beyond

Now is the time to rise again

Flying high, clothed in sunshine
We spread the wings of our burning souls