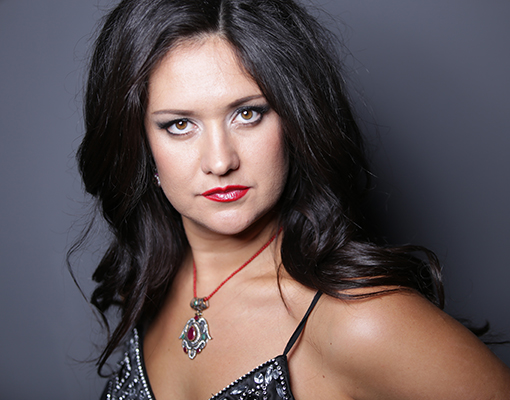 Principal singer of the Bolshoi Theatre

Agunda Kulaeva is one of leading mezzo sopranos and a principal singer at the Bolshoi Theatre in Moscow.

Future engagements will include among others Marguerite in La Damnation de Faust at Teatro Monumental in Madrid, Marina Mnischek in Boris Godunov at Salzburger Festspiele, mezzo soprano part in both  Tchaikovsky’s Snow Maiden at Accademia Nazionale di Santa Cecilia and Verdi’s Requiem in Moscow (with legendary maestro Placido Domingo, who chose himself all the soloists for this event).

At the beginning of the current season debuted with a great success as Preziosilla in La forza del destino in a new production at Deutsche Oper Berlin.

Her appearances included Carmen at both Deutsche Oper Berlin and Arena di Verona as well as Marguerite in concert performance of La Damnation de Faust at Deutsches Symphonie-Orchester Berlin.

In 2014 debuted as Liubasha (Tsar’s Bride) at the Avery Fisher Hall in New York, as well as at the Theater An der Wien, the Cultural Center in  Hon Kong and at Philharmonie 2 (Cité de la Musique) in Paris.

She sang roles of Amneris at the Sofia Opera and Ballet National Theatre (Radames – Kamen Chanev), Carmen and Eboli at the Festival “Varna Summer”.

She also performed the role of Carmen under the baton of Teodor Kurentsis in 2010.

Graduated from Vishnevskaya Opera Centre in Moscow and earler from Rostov State Conservatory as both choir conductor and singer.