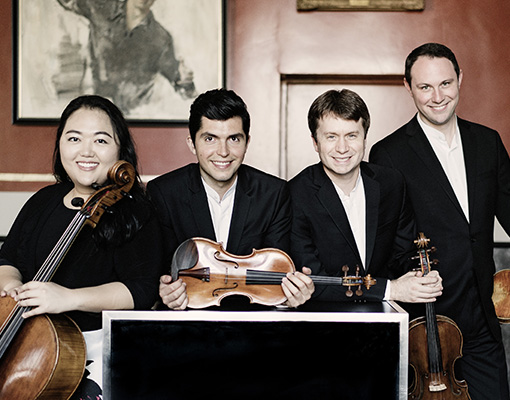 The Calidore String Quartet are renowned for their “deep reserves of virtuosity and irrepressible dramatic instinct” (New York Times). The Los Angeles Times described the musicians as “astonishing,” their playing “shockingly deep,” approaching “the kind of sublimity other quartets spend a lifetime searching.” The Washington Post noted that “four more individual musicians are unimaginable, yet these speak, breathe, think and feel as one”. For more than a decade, the Calidore has enjoyed performances and residencies in the world’s major venues and festivals, released multiple critically acclaimed recordings and won numerous awards. The Calidore is recognized as one of the world’s foremost interpreters of a vast repertory; from the quartets cycles of Beethoven and Mendelssohn to works of celebrated contemporary voices like Kurtag, Widmann and Caroline Shaw.

In their most ambitious recording project to date, the Calidore are preparing the complete cycle of Beethoven’s String Quartets for Signum Records. The recording will involve multiple releases, with the first album out in February 2023. Their previous Signum recordings on include Babel with music by Schumann, Shaw and Shostakovich, and Resilience with works by Prokofiev, Janáček, Golijov and Mendelssohn.

Recipient of a 2018 Avery Fisher Career Grant and a 2017 Lincoln Center Emerging Artist Award, the Calidore String Quartet first made international headlines as winner of the $100,000 Grand Prize of the 2016 M-Prize International Chamber Music Competition. The quartet was the first and only North American ensemble to win the Borletti-Buitoni Trust Fellowship, was a BBC Radio 3 New Generation Artist, and is currently in residence with the Chamber Music Society of Lincoln Center in New York.

The Calidore String Quartet was founded at the Colburn School in Los Angeles in 2010. The Calidore furthered their quartet studies at the Reina Sofia School of Music in Madrid, Spain and Stony Brook University (NY). Within two years, the quartet won grand prizes in virtually all the major US chamber music competitions, including the Fischoff, Coleman, Chesapeake, and Yellow Springs competitions, and it captured top prizes at the 2012 ARD International Music Competition in Munich and the International Chamber Music Competition Hamburg. An amalgamation of “California” and “doré” (French for “golden”), the ensemble’s name represents its reverence for the diversity of culture and the strong support it received from its original home: Los Angeles, California, the “golden state.”

Jeffrey Myers plays a violin by Francesco Rugeri c.1680, owned by a private benefactor on loan through the Leonhard Fellowship and plays a bow by Francois Tourte.

Ryan Meehan plays a violin by Vincenzo Panormo c.1775 and a bow by Joseph Henry.

Jeremy Berry plays a viola by Giovanni Battista Ceruti c.1811, owned by a private benefactor and a 1903 Umberto Muschietti viola. He plays a bow by Pierre Simon.

On February 3 2023, Signum Classics will release BEETHOVEN: The Late Quartets, the Calidore String Quartet’s third album and most ambitious project to date on the label following their acclaimed albums BABEL (2020) and Resilience (2018).  The three-disc set marks the...

The Calidore String Quartet will perform the world premiere of Hannah Lash’s String Quartet No. 1 in a streamed performance presented by the Shriver Hall Concert Series. The stream will be broadcast at 5:30pm EDT on Sunday, May 2, and afterwards will be available on...

“Calidore Quartet, a chamber group of the highest quality displaying technical precision, global sound and the individual refinement of each musician. (…) They literally took the audience’s breath away thanks to the impeccable playing of Myers and Meehan’s admirable violins, Berry’s intense viola, and Choi’s unreserved dedication to cello.”

“Taken together, [Babel] s one of the year’s best albums. When live musical performances return in a few month, the CSQ shouldn’t be missed. Until then, at least we have this superb release.”

This quartet, formed by students at Colburn nine years ago and now taking the world by storm, is astonishing. Its performances of two of late Beethoven quartets Wednesday, some of the most utterly profound chamber music in existence, were shockingly deep. I’ve never heard a quartet so young get so inside this ultimately inscrutable music… The essence of the Calidore is just how centered it is. It does not give the impression of risk-taking but risk-absorbing… the Calidore approached the kind of sublimity other quartets spend a lifetime seeking.

“The Quartets sound is warm and vibrant, and their hand-in-glove ensemble playing leaves plenty of room for individuality. Most important, every note is filled with character… The Calidore brought every playful and profound moment of “Essays” to life. I’ve never experienced a new piece of music (this was only its third public performance since the Calidore premiered it last summer in London) that kept a room full of people on the edge of their seats, rapt throughout. But this one did.”

“The Quartet exudes confidence and care: their attention to detail is untiring, but never mannered or extreme.  They produce a warm sound, in which the four voices are beautifully blended….. elegance, authority and charisma in equal measure.”

“The deep sense of communicative rapport these young musicians exude bodes well for future projects…we look forward to hearing whatever comes next.”

– Gramophone “One to Watch”

“Everything here has a clarity and an underlying rhythmic energy… These lively, intelligent performances of an attractive and thought-provoking programme offer compelling proof.”

“…hearing Fifth String Quartet [Bartók] in a pointedly fierce account by the Calidore String Quartet, came as a welcome reminder of how deftly he folded those folk sources into the quartet tradition of Haydn, Beethoven and Brahms.The breathless figuration and jabbing dissonances of the first movement pointed in both directions at once, as did the buoyant, asymmetric dance rhythms of the central scherzo…The ensemble pointed up all these contrasts with playing that was vigorous, sharp-edged and tender.

“The Calidore String Quartet is as good as one can get. The musicians’ quality of performance, interaction, self-listening and response could not be faulted. The attention and nuancing they accorded Shaw’s work was at a Beethovenian level of intensity and inspiration.”

“…the Calidores lived every moment of these remarkable and original pieces, making a human conversation out of the first and third, hinting at the metaphysical in “Echo”….the Calidors made sure that the lifting of the slow movement’s [Schumann Piano Quintet] austere solemnity, winging clear of the funeral cortege, stayed ethereal. It was so good to hear it…”

“In Mendelssohn’s early Op12 Quartet, and in the final, tormented Op80, they unleashed a sunburst of emotions, from the capricious delicacy of the Op12 Cazonetta to the whirlwind apotheosis and subsiding calm of the later work. This is an ensemble as capable of whipping up storms as enchanting us with breathless moments of utter magic.” 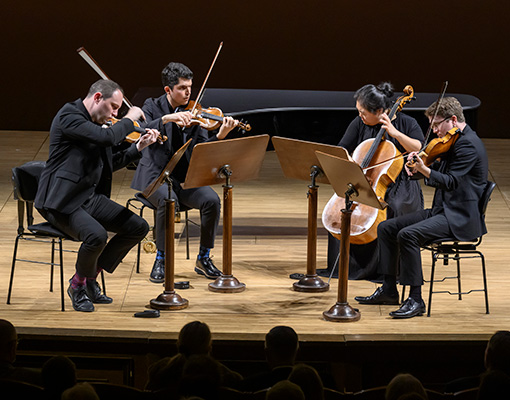 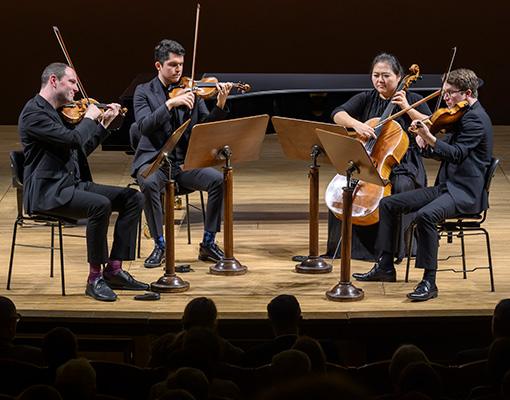 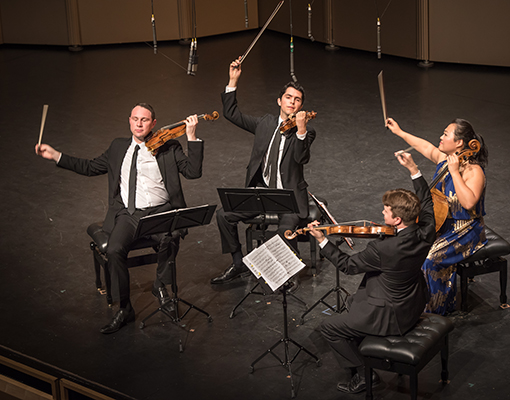 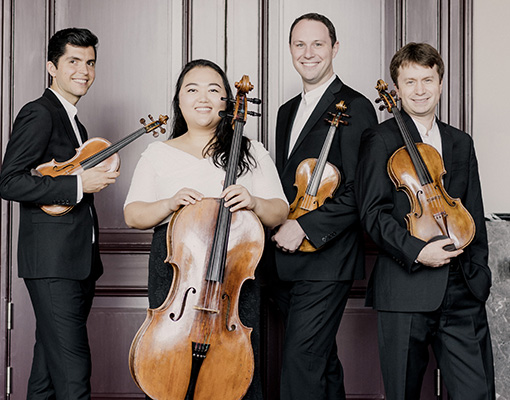