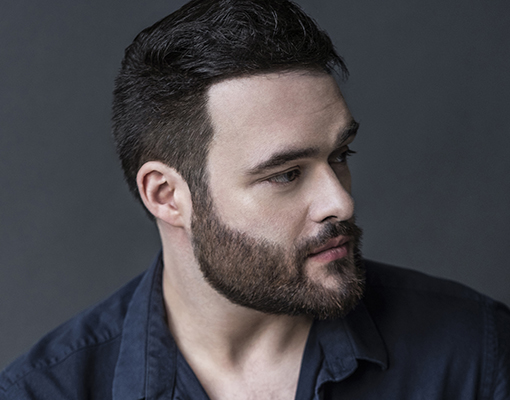 Hailed by the Kurier for “his distinctly beautiful tenor with a radiant and secure upper register”, Austrian-Australian tenor Gerard Schneider is acknowledged as a preeminent singer of opera, operetta, and song. He has developed a strong international presence and appeared around the world, having made major debuts at the Sydney Opera House, Carnegie Hall, Metropolitan Opera, Wexford Festival Opera, and Salzburg Festival in repertoire spanning the Bel Canto, Romantic, and Verismo styles.

In the 2021-2022 season, Mr. Schneider will return to Oper Frankfurt as Count Vaudémont in Tchaikovsky’s Iolanta, Der Hirt in Szymanowski’s Krol Roger, and as the Königssohn in Humperdinck’s Der Königskinder, a role he has already sung to great acclaim with the Tirol Festival in Erl, Austria. He will also sing the title role in Mascagni’s L’amico Fritz at the Tirol Festival, while elsewhere, he will reprise his signature role of the Prince in Rusalka with both Garsington Opera and Edinburgh Festival, and join the roster of the Metropolitan Opera in Eugene Onegin.

Cancellations due to the Covid-19 pandemic included Alfredo in La traviata with the Hessisches Staatstheater Wiesbaden and the cover of the Prince in Rusalka with the Metropolitan Opera, as well as Falsacappa in Offenbach’s Les Brigands, Lensky in Eugene Onegin, and Narraboth in Salome with OpPer Frankfurt. In the 2020-2021 season, Mr. Schneider performed the title role in Werther with Oper Frankfurt, gave a series of solo recitals for AMEX which were livestreamed for global audiences, and joined Cristof Loy’s new production of Rusalka at Teatro Real, Madrid.

In the 2019-2020 season, he continued his Ensemble work with Oper Frankfurt, performing Lyonel in von Flotow’s Martha, the Duke of Mantua in Rigoletto, and Narraboth in Barrie Kosky’s new production of Salome. He also appeared as the Duke with Staatsoper Stuttgart, and as the Prince in a new production of Rusalka with the Tirol Festival.

In the 2018-2019 season, Mr. Schneider joined the Ensemble at Oper Frankfurt, performing the Prince in Rusalka and Der Hirt in Krol Roger. He also made his debut with the Komische Oper Berlin in Barrie Kosky’s new production of La bohème and returned to Bard SummerScape for three projects celebrating the works of Alexander Pushkin: the role of Wolfgang Amadeus Mozart in Rimsky-Korsakov’s Mozart and Salieri, Count Lykov in Rimsky-Korsakov’s The Tsar’s Bride, and an afternoon concert featuring settings of Pushkin poetry by Rimsky-Korsakov, Tschaikovsky, Shostakovich, and others.

Highlights of past operatic work included the title role in Mozart’s La clemenza di Tito in Salzburg and again at the Teatro Comunale in Florence; Satyavān in Holst’s Savitri with the Melos Sinfonia for his debut in St. Petersburg, Russia, at Glazunov Hall and Sheremetev Palace; Prince Dimitri in Alfano’s Risurrezione at Wexford Festival Opera, directed by Rosetta Cucchi; Arturo in Bellini’s La straniera at Washington Concert Opera; Nicias in Thaïs at Minnesota Opera; Osaka in a new production of Mascagni’s Iris at Bard SummerScape, directed by James Darrah; Danilo in Die Lustige Witwe at the Kyoto Summer Music Festival in Japan; the title role in Boris Blacher’s Romeo und Julia with Ensemble Modern in live performances in Frankfurt and Alzenau, Germany; and the title role in Mozart’s Idomeneo at the Kilkenny Arts Festival in the historic St. Canice’s Cathedral, conducted by Christian Curnyn.

Additional work has included appearances at the State Opera of South Australia, the West Australian Opera, and Clonter Opera in operatic roles such as Rodolfo in La bohème, the title role in Debussy’s L’enfant prodigue, Jacopo in Verdi’s I due Foscari, both General Sir Philip Wingrave and the Narrator in Britten’s Owen Wingrave, Luigi in Puccini’s Il Tabarro, Bardolfo in Falstaff, and Alfred in Die Fledermaus. He has also sung both Don Basilio and Don Curzio in Le nozze di Figaro at the Wiesbaden Maifestspiele and Bregenz Festspielhaus in Austria.

Past awards include the Phoebe Patrick Award, the Guildhall School of Music and Drama Prize, the David Harper Prize, the Australian Opera Auditions Committee Prize at the Australian Singing Competition, and the Tait memorial prize at the 2014 Royal Over-Seas League Singing Competition. In addition, Mr. Schneider was a finalist at the Emmerich Smola Förderpreis, which culminated in a public broadcast with the Deutsche Radio Philharmonie under the baton of Justin Brown at the Landau Jugend-Stil Festhalle, and he appeared as part of the accompanying SWR (Südwestrundfunk) documentary, Landau sucht den Opernstar.

Mr. Schneider commenced his studies at the Guildhall School as a member of the Opera School under the tutelage of Yvonne Kenny, continued on as the Royal Opera House scholar at the National Opera Studio, and completed his Artist Diploma at the Juilliard School as a student of Prof. Edith Wiens. Additionally, he undertook the Erasmus exchange programme at the Mozarteum in Salzburg where he appeared as a member of the Young Singers Project. He is currently a student of Maestro Neil Shicoff KS.

“Bringing Massenet’s Werther once again into repertoire, Oper Frankfurt presents Gerard Schneider in the title role who gives – in every respect – an outstanding debut…”

“In the title role, Gerard Schneider is able to keep the promise he made in his debut as the Prince in Rusalka: his youthful, lush tenor tenor fits perfectly with Werther’s Sturm-und-Drang pathos. He masters the high passages – which are as characteristic of French tenor parts as they are delicate – elegantly through the tasteful use of head voice.”\

“…at the same high level, Gerard Schneider sang an excellent Prince. The Austrian-Australian tenor impressed with a clear and pleasant timbre, secure and radiant heights, a touching use of the head voice as he lay dying, as well as an attractive, and slender stage appearance.

You can already look forward to his role debut as King’s Son in Engelbert Humperdinck’s opera Königskinder next summer in Erl.”

“Gerard Schneider possesses a tenor that closes one’s ears to all Second-Class interpretations of Lyonel.  ​Perfection is possible so get in while you can.”

“The fact that the Prince– famously embodied by Gerard Schneider– is extremely unsettled in issues of love and is ultimately catapulted from this human world to willingly and faithfully die in the arms of Rusalka appeared absolutely logical in this Erl version.

There was also euphoric applause for the performance, which was blended with loud Bravo calls, especially for the leading singers Karen Vuong and Gerard Schneider… “

“But the most memorable portrayal of the evening was Gerard Schneider’s wonderfully Gallic Nicias, brimming with finesse and joie de vivre. The Australian-born tenor, in an auspicious company debut, offered the perfect antidote to Athanaël’s dour lessons in anhedonia; one felt the audience relax—and then smile—en masse”

“Tenor Gérard Schneider played the foil brilliantly, convincingly portraying the sybarite Nicias in way that made you want to forget all about the spiritual and succumb to the pleasures of easy living. Moreover, Schneider managed to make us really care about the character – something that isn’t particularly easy with this role.”

“In the performance, Gerard Schneider was heard as a luminous, fresh and lyrical Rodolfo, who rarely had to force his tone in the upper register.”

“… Gerard Schneider has a voluminous tenor voice as Rodolfo… he, vocally and dramatically through his interpretation, good-looks and magnificent tenor sound, turns out to be an ideal Rodolfo…”

Gerard Schneider provided a colorful foil to Meachem as the sybaritic Nicias in his Minnesota Opera debut. Ardent and irreverent where Meachem was straight-laced and sober, Schneider’s ringing tenor made a sharp impression”

“Mr. Schneider brought out Boris’s desperate longing for Katya through his plangent singing during their illicit love scene…”

“Both tenor Gerard Schneider and bass Daniel Mirosław brought real bel canto virtues to the first scene of Der Kaiser.
Their singing suggested that even in the harshest of realms, beauty can thrive.”

“The singing is excellent, led by a thrilling performance from tenor Gerard Schneider, plucked from the relative obscurity of his studies at the JuIlliard to step in for indisposed John Mark Ainsley. Looking like a young Pavarotti, Schneider has an imposing stage presence with a vivid range of colour and warmth of tone that compels attention…”

“Nicias’ Alexandria is the embodiment of sensual excess and wild abandon, and Schneider’s smartly sung Nicias is wholly comfortable in being the leader of an orgiastic following … In addition to his strong vocal performance, Schneider proved to be a commendable dancer as well, briefly joining the dance troupe in a section of the opera’s second act ballet.”

(Dein ist mein ganzes Herz, the aria of Prince Sou Chong , interpreted by Gerard Schneider was the highlight of the gala . The grandiose voices were rewarded with rapturous applause, red roses ,large bouquets of flowers and the applause of the orchestra …) 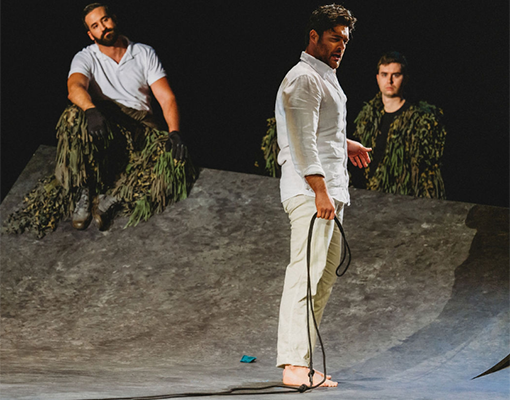 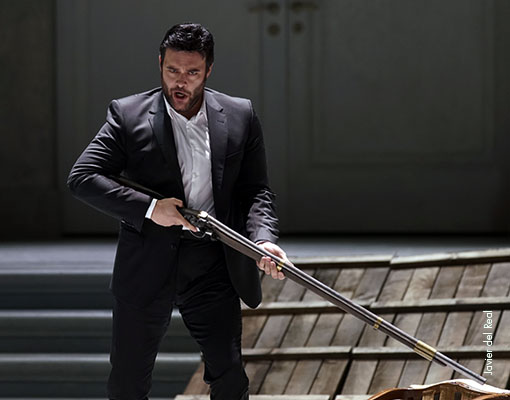 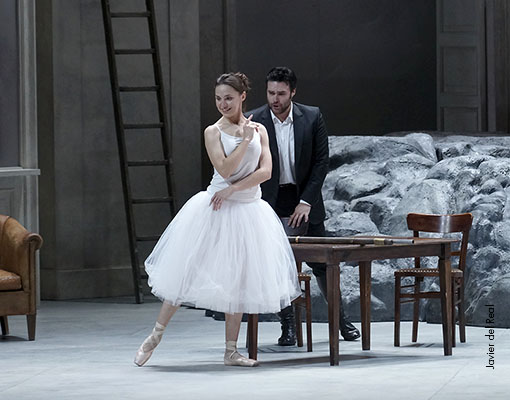 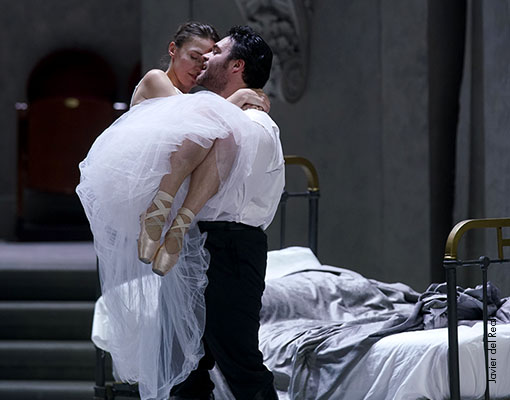 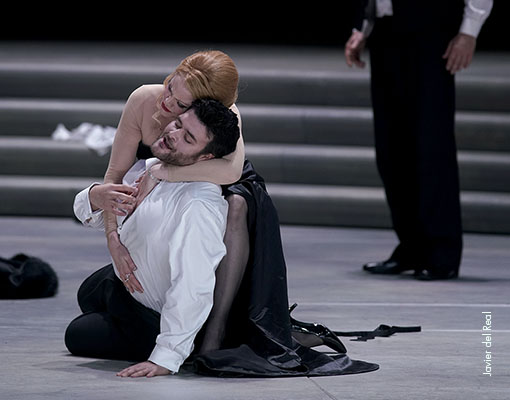