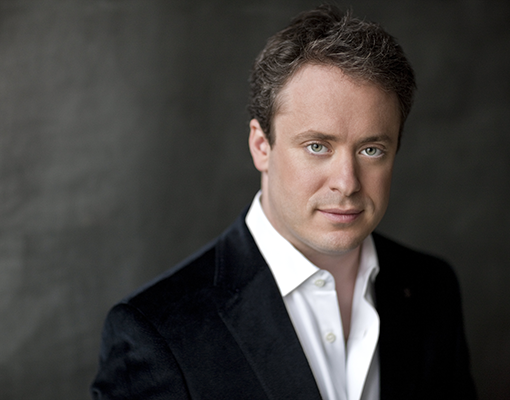 With a strong international reputation for his interpretations of both orchestral and operatic music, Canadian conductor Julian Kuerti combines a confident style, artistic integrity and passion for collaboration bringing him to the forefront of the music scene. Julian Kuerti has led major symphony orchestras and has appeared in renowned opera houses and concert halls on five continents, and enjoys close working relationships with many of the leading soloists and singers of today.

In 2018, Kuerti was named Music Director of the Kalamazoo Symphony Orchestra in Kalamazoo, Michigan. The KSO is one of the most important orchestras in the region, having been presenting concerts for almost a century and maestro Kuerti will lead the orchestra through its 100 year anniversary season and beyond.

Kuerti was appointed Principal Guest Conductor of the National Symphony Orchestra of Peru in 2019, and he will appear several times with them during the season at the Gran Teatro Nacional in Lima. Maestro Kuerti has enjoyed a strong relationship with the OSNP over many years, and along with conducting symphonic programs he will lead the National Symphony, the National Choir and the National Children’s Choir in a new production of Offenbach’s La Périchole in October 2019.

Closer to home, Kuerti has appeared with all the major Canadian orchestras, and in the United States has performed with the Los Angeles Philharmonic, the symphonies of Houston, Dallas, Cincinnati, Seattle, New Jersey, Milwaukee, Atlanta, Utah, the Civic Orchestra of Chicago, and the St. Paul and Los Angeles chamber orchestras.  He made his New York City Opera debut at Lincoln Center leading Oliver Knussen’s “Where the Wild Things Are.” Kuerti has enjoyed the opportunity to work with many wonderful artists including Yo-Yo Ma on multiple occasions, Leif Ove Andsnes, Leon Fleisher, Itzhak Perlman, Lynn Harrell and Peter Serkin.

As Principal Guest Conductor of the Orchestre Métropolitain de Montreal and Principal Director of the Orquesta Sinfónica de Concepción in Chile, Kuerti made a reputation for himself both in the Americas and abroad. In Montreal, Kuerti led numerous subscription concerts at the Maison Symphonique de Montréal which were highly praised by both the press and the public.  In Chile, he conducted a wide variety of symphonic programmes and staged operas, including new productions of Mozart’s Die Zauberflöte, Verdi’s La Traviata, and Bizet’s Carmen. He spearheaded a new critical edition of Chilean Composer Enrique Soro’s Sinfonia Romantica which was first performed in Concepcion in 2015. The preparation of this work and the final performance is the subject of a documentary film, Recording Romantica by Chilean filmmaker Carlos Pérez. Julian has appeared several times in Buenos Aires, most recently conducting a new production of Rusalka at the Teatro Colon.

In Asia and Australasia, Kuerti has worked with the Sydney Symphony and pianist Stephen Hough, the Malaysian Philharmonic and led a five concert tour with the New Zealand Symphony.  He was described as the “Epitome of cool graciousness” by The New Zealand Herald for his interpretation of Berlioz’s Symphonie Fantastique.

Born in Toronto into one of Canada’s most distinguished musical families, his father is famed pianist Anton Kuerti.  He began his instrumental training on the violin, studying with some of Canada’s finest teachers.  While completing an honors degree in engineering and physics at the University of Toronto, Kuerti kept up the violin, performing as concertmaster and soloist with various Canadian orchestras.  He began his conducting studies in the year 2000 at the University of Toronto.

From 2007-2010 Kuerti held the position of Assistant Conductor at the Boston Symphony Orchestra, where he had the opportunity to conduct the orchestra frequently at Symphony Hall and at Tanglewood.  During the 2006-07 season, he was assistant conductor to Ivan Fischer at the Budapest Festival Orchestra, where he was invited back to lead performances of Viktor Ullmann’s opera “Der Kaiser von Atlantis” the following season.

He was founding artistic director and principal conductor of Berlin’s Solistenensemble Kaleidoskop, with whom he recorded the album “When We Were Trees” by Italian cellist and composer Giovanni Sollima for Sony/BMG.   He also recorded music by Golijov and Foss, “Plain Song, Fantastic Dances”, with the Boston Symphony Chamber Players which was released on the BSO’s own label.

“From the downbeat, one was immediately struck by Kuerti’s natural, genuine musicianship that encouraged musicality as well as precision from his players … the orchestra was in very good hands.”

“Under the baton of Julian Kuerti, the orchestra produced a stirring finale which had the audience…stamping their feet in appreciation.”

“The Frankfurt Radio Symphony Orchestra under the direction of the Canadian conductor Julian Kuerti won the audience over in the twinkling of an eye with a folkloristic programme in the utterly sold out Stadttheater. Kuerti and the Orchestra kept the bigger picture in mind and offered delightful music-making with many beautiful details. The contrasting, nearly chamber-like Adagio, in which flute, cor anglais and solo violin emerge preeminent, was adorable. The musical ideas sparkled like small jewels; Kuerti held their fast succession up to the jubilant Finale, announced with trumpet blasts. Gigantic applause.”

“Perhaps it takes a degree in physics, like the one held by guest conductor Julian Kuerti, to create intelligible interpretations of the work of Messaien and Prokofiev. On Thursday night, the [Rochester Philharmonic Orchestra’s] performance was of such artistry of phrasing that the case was made for the proper interpretation of those composers … Kuerti brought phrasing to the lovely, haunting, seemingly random rhythms and apparently wandering notes of the Concerto [Prokofiev Violin Concerto No. 2] … I should hope that we will see more of Kuerti, paired to our RPO.”

“From the downbeat, one was immediately struck by [Kuerti’s] natural, genuine musicianship that encouraged musicality as well as precision from his players. He opened with Mozart’s Overture to ‘Cosi fan tutte,’ leading with fleet tempos and bringing out the work’s witty character…[Kuerti’s] view was rich with drama, energy and unflagging inspiration. The slow introduction was full of mystery, and exploded onto the allegro with timpani crashes, like a sudden summer storm…Sparks flew in the finale, and Kuerti brought out the contrasts between its delicate and powerful moments. Through it all, his communication with the musicians was confident, and they responded with fine playing. The impression given was that the orchestra was in very good hands.”

“Berlioz still makes us think, a factor that Julian Kuerti brought convincingly to his interpretation… Kuerti shaped it brilliantly, ensuring that each of the five clearly defined parts plays its role to the maximum, allowing fantasy to explode in the right place and to the right degree of fireworks in the witches’ Sabbath.”

“Kuerti’s gestures were precise and clear – an open-handed invitation to the contrabassoon, an abrupt karate chop in the air for the violins – as he steered his [Royal Conservatory] orchestra through [Petrouchka’s] tricky changes in tempo and dynamics.”

“Conductor Julian Kuerti drew a predictably brilliant response from the players[…] The richness of sound, along with Kuerti’s attention to the smallest detail, fuelled the almost cinematic narrative that the composer lays out. “

“Julian Kuerti, son of the well-known pianist [Anton Kuerti], on Thursday night led Orchestre Métropolitain in their first concert at Centre Pierre-Charbonneau. One detail that was not mentioned in the programme leaflet was that the 36 year old musician is now Principal Guest Conductor of Orchestre Métropolitain. … He is certainly a good choice. Mr Kuerti had made a good impression at his concerts with the OSM and OM, in Montreal and Lanaudière, and it was the same this week … His leadership is very energetic, very warm and very detailed. … The evening’s main event was Dvorak’s New World Symphony. [Kuerti’s] in-depth understanding of the score is obvious. Dazzling counterpoint gave the famous slow movement an unusual air of gravitas; strings sang out leaving full freedom of expression for the first desks, leading to the exhilarating conclusion of the finale.”

“Kuerti’s highly charged and exceptionally precise conducting style drove the performance, sharp accents combining with plaintive lyricism and a fired-up brass section. Urgency and tight ensemble marked Dvořàk’s Symphony No. 6. With Kuerti’s clearly defined gestures to guide them, the orchestra had an unusual sweep and presence. He is a commanding conductor who puts his mark on the orchestra, the Alabama Symphony serving as a supple receptor of his ideas. The Scherzo was particularly exciting, the score’s cross-rhythms generating a kinetic impulse, the strings taking full advance of its lyrical warmth.”

“In his interpretation of Dvorák’s Symphony No.8, G Major, op. 88 Kuerti shaped the catchy themes with visible and technically great sovereignty – including a lot of fine-tuning in the arrangement of the dynamics. The Frankfurt Radio Symphony Orchestra followed – visibly inspired – and made Kuerti’s debut to an absolute success.”

“Young Canadian conductor Julian Kuerti made his debut with the Frankfurt Radio Symphony Orchestra at their broadcasting centre [with Dvorak’s Symphony No.8]. Kuerti presented the piece with consistency and the appropriate evocativeness of the internal structures with clear, economical gestures. The tempo of the final coda had a successful surprise effect. In the first half he already impressionably facilitated the gory saga of Sárka’s thirsting for revenge (Symphonic Poem No.3 of the cycle “Má vlast” by Bedrich Smetana). “

“Kuerti gave the four movements [Dvorak’s Symphony No.8] opulent musical strains, provided the Allegro opening with tense fire, the rising triad in effective contrast of minor and major, and let the instrumental groups project radiance, especially the celli. The Allegretto Grazioso evoked pleasure with light passages played by the woodwind section and the violins in elegant style. Kuerti’s energised conducting manner enabled him to present contrasts … there was excitement from the audience; many curtain calls for the Frankfurt musicians. “

“The Frankfurt Radio Symphony Orchestra under the direction of the Canadian conductor Julian Kuerti won the audience over in the twinkling of an eye with a folkloristic programme in the utterly sold out Stadttheater… Kuerti and the Orchestra kept the bigger picture in mind and offered delightful music-making with many beautiful details. The contrasting, nearly chamber-like Adagio, in which flute, cor anglais and solo violin emerge preeminent, was adorable. The musical ideas sparkled like small jewels; Kuerti held their fast succession up to the jubilant Finale, announced with trumpet blasts. Gigantic applause. “

“In his City Opera debut Julian Kuerti, a rising Canadian conductor who was an assistant to James Levine at the Boston Symphony Orchestra, drew a bustling, moody and colorful performance of Mr. Knussen’s 50-minute score from the impressive City Opera Orchestra.”

“Kahane selected a first-rate conductor to step in for him with the Los Angeles Chamber Orchestra … Kuerti confidently led Kahane’s band in works representing a broad stylistic range.”

“Guest conductor Julian Kuerti demonstrated a grace and interpretive confidence that showed why his star is on the ascent.”

“He clearly is on a career journey with an upward trajectory.” 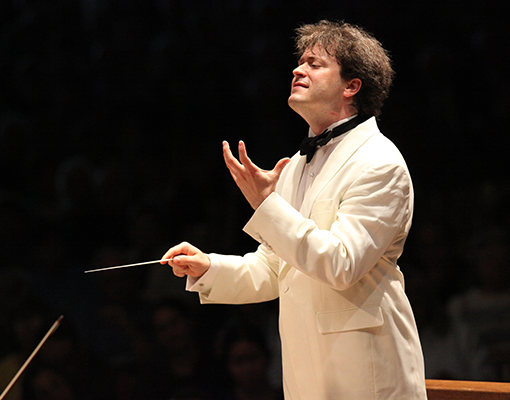 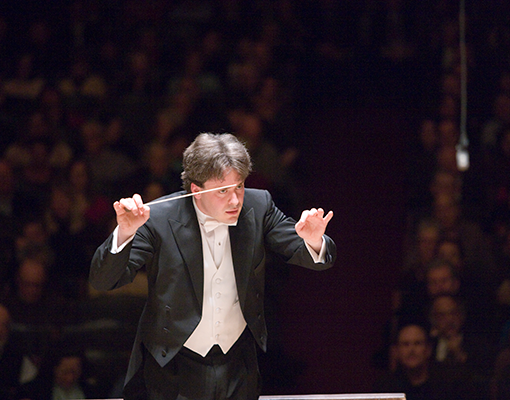 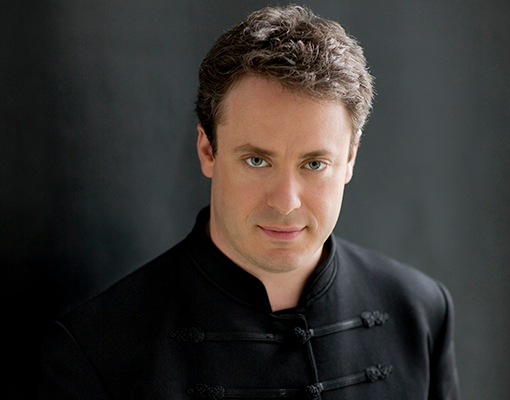