“A pianist of magisterial elegance, power, and insight” (New York Times), Leif Ove Andsnes is “one of the most gifted musicians of his generation” (Wall Street Journal). With his commanding technique and searching interpretations, the celebrated Norwegian pianist has won acclaim worldwide, playing in the world’s leading concert halls and with its foremost orchestras, while building an esteemed and extensive discography. He is the founding director of the Rosendal Chamber Music Festival, was co-artistic director of the Risør Festival of Chamber Music for nearly two decades, and has served as music director of California’s Ojai Music Festival. A Gramophone Hall of Fame inductee, he holds honorary doctorates from New York’s Juilliard School of Music and the Universities of Bergen and Oslo.

This season, Andsnes performs Dvořák’s unjustly neglected piano cycle Poetic Tone Pictures, both on a new Sony Classical release and on high-profile recital tours of Europe and North America. In concert, he plays Debussy’s Fantaisie with the Cleveland Orchestra; showcases his interpretation of Grieg’s concerto with the Leipzig Gewandhaus, NDR Elbphilharmonie and London Philharmonic Orchestras; and performs Rachmaninov’s Third with ensembles including the Oslo Philharmonic and Royal Scottish National Orchestra. Among other 2022-23 highlights, Andsnes gives lieder recitals with baritone Matthias Goerne, with whom he recently received his eleventh Grammy nomination.

Andsnes also continues his partnership with the Mahler Chamber Orchestra on “Mozart Momentum 1785/86.” A major multi-season project exploring one of the most creative and seminal periods of the composer’s career, this sees him lead the ensemble in Mozart’s Piano Concertos Nos. 20–24 at key European venues, besides recording them for Sony Classical. The project marks his second artistic partnership with the orchestra, following “The Beethoven Journey.” An epic four-season focus on the composer’s music for piano and orchestra, this saw Andsnes give more than 230 performances in 108 cities across 27 countries, as chronicled in the documentary Concerto – A Beethoven Journey and captured on an award-winning Sony Classical series.

Leif Ove Andsnes records exclusively for Sony Classical. His previous discography comprises more than 30 discs for EMI Classics – solo, chamber, and concerto releases, many of them bestsellers – spanning repertoire from the time of Bach to the present day. He has been nominated for eleven Grammys and awarded many international prizes, including six Gramophone Awards. Recent releases encompass the Billboard best-selling Sibelius as well as Chopin: Ballades & Nocturnes (Sony Classical), an album of Stravinsky’s music for two pianos with Marc-André Hamelin (Hyperion), Schumann’s Liederkreis & Kernerlieder, with Matthias Goerne (Harmonia Mundi), Bent Sørensen’s piano concerto, La Mattina, with the Norwegian Chamber Orchestra and Per Kristian Skalstad (Dacapo) and a disc dedicated to the music of Norwegian composer Ketil Hvoslef on which Andsnes performs the piano concerto written in 1994 with the Bergen Philharmonic and Edward Gardner (Simax).

Andsnes has received Norway’s distinguished honor, Commander of the Royal Norwegian Order of St. Olav as well as the prestigious Peer Gynt Prize. He is also the recipient of the Royal Philharmonic Society’s Instrumentalist Award and the Gilmore Artist Award.

Born in Karmøy, Norway in 1970 Leif Ove Andsnes studied at the Bergen Music Conservatory with Jirí Hlinka. He also received invaluable advice from the Belgian piano teacher Jacques de Tiège who, like Hlinka, has greatly influenced his style and philosophy of playing. He is currently an Artistic Adviser for the Prof. Jirí Hlinka Piano Academy in Bergen where he gives annual masterclasses. Andsnes lives in Bergen with his family of three children.

Congratulations to Our 2022 Gramophone Award Winners!

For six-time Gramophone Award-winner Leif Ove Andsnes, 28 May marks the release of MM/1785 on Sony Classical. The first volume of Mozart Momentum 1785/1786, his second project as the inaugural Artistic Partner of the Mahler Chamber Orchestra (MCO), the new album...

“Andsnes has entered an elite circle of pianistic stardom. … When he sits in front of the keyboard …, extraordinary things happen.”

“In the first movement of his Second Piano Concerto, Beethoven interrupts the lively giddy mood for a few bars to pause briefly with a dreamy melody. Nothing big, just a pretty interlude, one would think. But, as Leif Ove Andsnes hinted, there with a trill, a slight voltage hesitation and, as the Mahler Chamber Orchestra (MCO), dipped the sound the passage suddenly gave off a very special magic. Such small miracles – and there were several – showed the exceptional level of the evening, in the sold-out Laeiszhalle giving the Elbe Philharmonic concerts a brilliant start to the season. Normally the repertoire of orchestras and their guests allows too little time for detailed work. Andsnes and the multinational elite group of the MCO have been working for years on the intricacies of their Beethoven-image. The blind understanding between the soloist and his partner could be felt in every bar of the piano concertos … The pianist brings Beethoven down from the base of the “Titans” and provides him with both feet on the ground, where we can see him through the eyes of the soul. People rarely have the chance to come this close to Beethoven “

“Things got more refined with the appearance of pianist Leif Ove Andsnes to perform Rachmaninov’s Piano Concerto no. 4 in G minor, the least well-known of the four. After emigrating from Russia after the October Revolution in 1917 and enjoying great success in the USA, the Fourth, whilst already started, was not finished until 1926. Appearing after a compositional lull, it was different enough to be scathingly received. Gone are the sweeping, eternal lines, memorable melodies and thick scoring. The Fourth is varied and subtle and more thinly scored than the Second or Third, shifting from idea to idea so quickly that it was condemned as trivial and salon-like by his critics. A New York Evening Telegramcritic clearly saw it not as progressive, but diminutive, writing that “Mme Cécile Chaminade might safely have perpetrated it on her third glass of vodka”. Andnes mastered the virtuosic work with remarkable ease. His attention to sound was beautiful and varied, and he filled the corners of each tone regardless of dynamic level or style of attack. It was a pleasure to listen to him, particularly within the introspective second movement, which was a dream. At the close of his performance one could have heard a pin drop, and Andnes was called to the stage repeatedly, graciously offering a Sibelius Romance as an encore.”

“… Leif Ove Andsnes performed Rachmaninov’s Piano Concerto No. 4 – with its complex melody and intricate solo part – displaying both an immaculate technique and virtuosic empathy for the music.”

“Andsnes’s pianistic skill in sustaining all but orchestral accompaniments was formidable.”

“Most recitalists treat programme-making as a secondary art: a bit of light and dark, fast and slow, to point up contrasts, modulate a theme and display a variety of skills. Matthias Goerne and Leif Ove Andsnes are made of sterner stuff. For their collaboration on Tuesday they chose a monothematic programme on the subject of death, comprising music by just two composers. Morbid? No, exquisite.”

“Andsnes evidently took as much care with the musical line of Shostakovich’s Night as he would have done with a solo work. He brought out the all-too-obvious ‘quirkiness’ of Immortality, and there could be no faulting strength or starkness in the performance from either artists of Death.”

“The great pleasure of the evening came from Andsnes… wonderfully penumbral in the Shostakovich, he picked out Mahler’s counterpoint with exquisite, Bach-like lucidity.”

“A pianist of magisterial elegance, power and insight.” 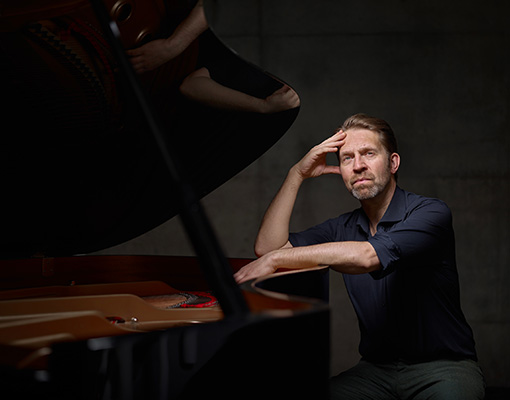