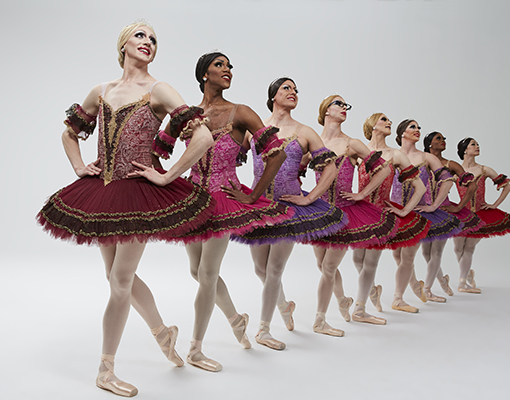 Founded in 1974 by a group of ballet enthusiasts for the purpose of presenting a playful, entertaining view of traditional, classical ballet in parody form and en travesti, Les Ballets Trockadero de Monte Carlo first performed in the late-late shows in Off-Off Broadway lofts. The Trocks, as the dancers are affectionately known, quickly garnered a major critical essay by Arlene Croce in The New Yorker which, combined with reviews in The New York Times and The Village Voice, established the company as an artistic and popular success.

By mid-1975, the Trocks’ inspired blend of a loving knowledge of dance, impeccable comic approach, and the astounding fact that men can, indeed, dance en pointe without falling flat on their faces, was being noted beyond New York. Articles and notices in publications such as Variety, Oui, The LondonDaily Telegraph, as well as a Richard Avedon photo essay in Vogue, made the company nationally and internationally known.The 1975-76 season was a year of growth and full professionalization. The company added management, qualified for the National Endowment for the Arts Touring Program, hired a full-time teacher and ballet mistress to oversee daily classes and rehearsals, and made its first extended tours of the United States and Canada. Packing, unpacking, and repacking tutus and drops, stocking giant-sized toe shoes by the case, and running for planes and chartered buses all became routine parts of life.

Since those beginnings, the Trocks have established themselves as a major dance phenomenon throughout the world. The company has participated in dance festivals in Turkey, Holland, San Luis Potosi, Madrid, Montreal, New York, Paris, Spoleto, Turin, and Vienna. There have been television appearances as varied as a Shirley MacLaine special, The Dick Cavett Show, What’s My Line?, Real People, On-Stage America, visiting with Kermit and Miss Piggy on Muppet Babies, and a BBC Omnibus special on the world of ballet, hosted by Jennifer Saunders. The Trocks also had their own solo specials on national networks in Japan and Germany, as well as a French television special with Julia Migenes. A documentary was filmed and aired internationally by the acclaimed British arts program, The South Bank Show, and the Company was featured in The Egg, the PBS program about arts in America. Several performances were taped by a consortium of Dutch, French and Japanese TV networks at the Maison de la Danse in Lyon, France, for worldwide broadcast and DVD distribution.

The Trocks’ numerous tours have been both popular and critical successes – the company’s annual schedules have included six tours to Australia and New Zealand, twenty-five to Japan (where annual visits have created a nation-wide cult following and a fan club), ten to South America, three to South Africa, and fifty-five tours of Europe. In the United States, the company has become a regular part of the college and university circuit, in addition to frequent presentations in all of the 50 states. The company has appeared in over thirty countries and over five hundred cities worldwide since its founding in 1974. Increasingly, the company is presenting longer seasons, which have included extended engagements in Amsterdam, Athens, Auckland, Barcelona, Beijing, Berlin, Brisbane, Buenos Aires, Caracas, Cologne, Glasgow, Hamburg, Hong Kong, Johannesburg, Lisbon, London, Lyon, Madrid, Melbourne, Moscow (at the famed Bolshoi Theater), Paris (at the Théâtre Musical de Paris Châtelet), Perth, Rome, Singapore, Sydney, Tokyo, Vienna and Wellington.The company continues to appear in benefits for international AIDS organizations such as DRA (Dancers Responding to AIDS) and Classical Action in New York City; the Life Ball in Vienna, Austria; Dancers for Life in Toronto, Canada; and London’s Stonewall Gala. In addition, the Trocks have given or participated in special benefit performances for Connecticut Ballet Theater, Ballet Hawaii, Rochester City Ballet, Sadler’s Wells Theater in London and the Gay and Lesbian Community Center and Young Audiences/Arts for Learning Organization, and the Ali Forney House, benefiting gay youths in need, in New York City.

The original concept of Les Ballets Trockadero de Monte Carlo has not changed. It is a company of professional male dancers performing the full range of the ballet and modern dance repertoire, including classical and original works in faithful renditions of the manners and conceits of those dance styles. The comedy is achieved by incorporating and exaggerating the foibles, accidents, and underlying incongruities of serious dance. The fact that men dance all the parts – heavy bodies delicately balancing on toes as swans, sylphs, water sprites, romantic princesses, or angst-ridden Victorian ladies – enhances, rather than mocks, the spirit of dance as an art form, delighting and amusing the most knowledgeable, as well as novices, in the audiences.

After recent appearances on ABC News and for the Prince of Wales on the Royal Variety Show, the dancers of Les Ballets Trockadero de Monte Carlo have become more well-known than ever.  For the future, there are plans for new works in the repertoire; new cities, states and countries to perform in; and for the continuation of the Trocks’ original purpose: to bring the pleasure of dance to the widest possible audience. The company will, as it has done for thirty-five years, “Keep on Trockin’.”

“All of the “ballerinas” dance en pointe — but the genius touch of the Trocks is that while the ballet’s stories and customs are, lovingly, played for laughs, the technique isn’t… And though I’ve seen this “Swan Lake” many times, the variation for four hand-holding swans — three of whom are intently addressing the task at hand, one of whom has enough ham for several sandwiches — remains a comic masterpiece.”

“In the first minute of the show Friday, March 3, titters turned to guffaws. The waves of applause soon followed, and they didn’t end till the encore two hours later. In the dance world, only Les Ballets Trockadero de Monte Carlo inspires this kind of reaction…”

“Anytime one sees the Trocs, one wonders how they do all that they do. That core strength, the simulation of female roles with male bodies, effectively affected lines, potential tendon-snapping poses and pointe-work — small wonder that this all-male ensemble is world famous for doing just about anything any other male — and female — dancer can do.”

“The Trocks are a guaranteed hoot for people who know nothing of ballet and an absolute must for those who think they know the originals.”

“They fill the stage with their voluminous movement while sporting thick lashes, tutus, and god-given bushels of manly armpit hair. But what makes the Trocks stand out from other ballet and contemporary ballet companies…is that they don’t strive for the celestial kind of beauty, instead, they bring humanness to ballet.”

“Freed of any traditional troupe hierarchy, all dancers had moments to shine and show off their diverse characters, while the jokes were timed to precision, the audience knew exactly where to focus, and there was no diva-like scene stealing.”

“Throughout this lovely show, the performance is a perfectly balanced combination of genuinely accomplished dancing and wonderfully timed comic cock-ups. From the solo dancer who moults feathers across the stage to the diminutive performer trying desperately to pick up his giant partner, the extraordinary skill of the Trocks proves that to undo ballet, one must first be able to do ballet.” 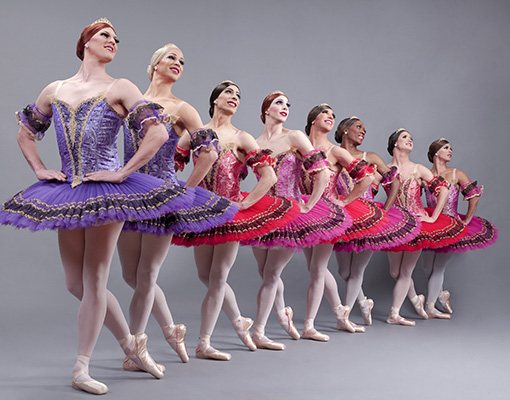 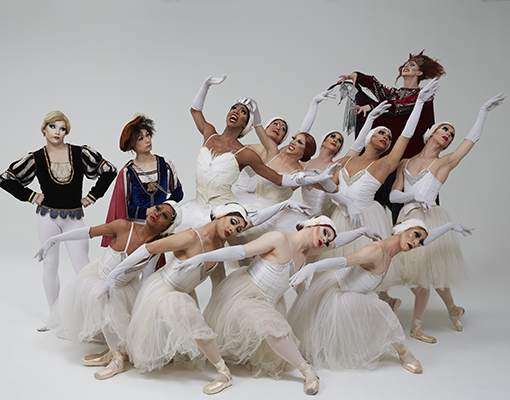 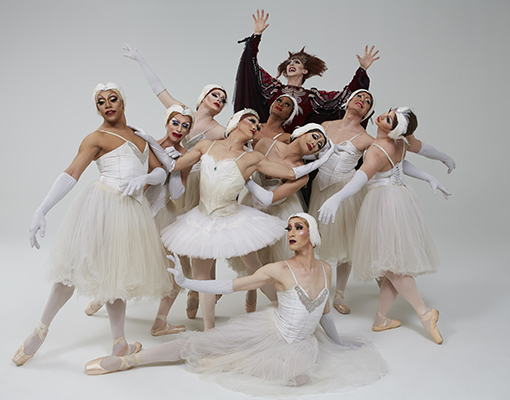 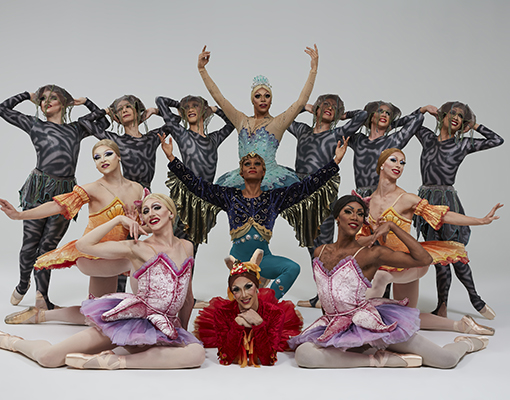 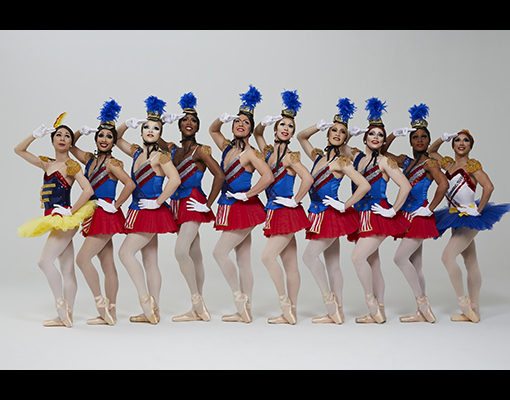