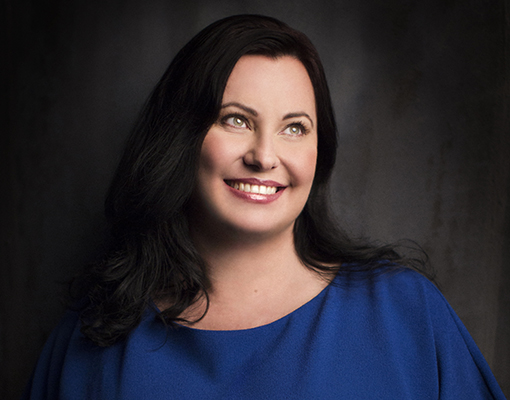 Ukrainian soprano Liudmyla Monastyrska is acclaimed for her lush, powerful, compelling performances and superb technical command. Her relationships with European, American and Asian opera houses have continued to expand following her highly acclaimed 2010 debut with Deutsche Oper Berlin in the title role of Puccini’s Tosca.

Future engagements include Abigail in Nabucco and Tosca at Metropolitan Opera in New York, Amelia in Un ballo in Maschera at Bayrische Staatsoper Munich, Leonora in La forza del destino at Teatro Regio in Parma, Aida at both Arena di Verona and  at Teatro di San Carlo in Naples. Performs a soprano part in Verdi’s Requiem with Orchestre National de Lyon.

In the season 2019-20 she continues her successes as Abigail in Nabucco at Staatsoper Hamburg, Odabella in Attila with Münchener Runfunkorchester and Tosca at Teatro dell’Opera di Roma.

She returns to Teatro alla Scala as Leonora in Il trovatore and then to ROH Covent Garden as Santuzza in Cavalleria Rusticana. And she finishes her new season at Deutsche Oper Berlin as both Leonora in La forza del destino and Abigail in Nabucco.

The 2018-19 season sees Ms. Monastyrska star in new productions of La forza del destino conducted by Sir Antonio Pappano at Covent Garden and Tosca at the Gran Teatre del Liceu. She also makes her role debut as Leonora in Il trovatore at the Staatsoper Berlin and returns to the Deutsche Oper Berlin as Tosca, as well as the Wiener Staatsoper as Abigaille in Nabucco. She will also sing opera gala concerts in Greece with Dimitri Platanias and Latvia to celebrate the Latvian National Opera’s centennial.

Recent season highlights with the Opera National de Paris include the title roles of Tosca and Aida; with the Metropolitan Opera the title roles of Tosca and Aida, Abigaille in Nabucco with Placido Domingo, and Santuzza in Cavalleria Rusticana; with Deutsche Oper Berlin the title role of Tosca, and Abigaille in Nabucco. She also sang the role of Abigaille with Placido Domingo at London’s Royal Opera House, and made her debut with the Vienna State Opera singing the title role in Aida under conductor Simone Young. Additional performances included the title role of Puccini’s Tosca under Patrick Summers for Houston Grand Opera, and in summer 2015 she toured through Japan and sang the role of Lady Macbeth in Verdi’s Macbeth with the Royal Opera House led by conductor Sir Antonio Pappano.

Among Ms. Monastyrska’s many performance credits are Verdi’s Macbeth with Maestro Pappano and Nabucco with Nicolà Luisiotti at London’s Royal Opera House (both new productions), and Nabucco, Cavalleria Rusticana and Aida at La Scala. Aida has also served as her introduction to the Metropolitan Opera, Houston Grand Opera, and Vienna State Opera, as well as the Hollywood Bowl, where she sang Aida in concert under the baton of Gustavo Dudamel. With the Deutsche Oper Berlin, she has appeared in productions of Puccini’s Tosca, and Verdi’s Macbeth and Nabucco, as well as a concert version of Attila. Ms. Monastyrska has sung Verdi’s Messa da Requiem at Rome’s Accademia di Santa Cecilia as well as with The Cleveland Orchestra, and has also sung Verdi’s La Forza del Destino with Zubin Mehta at Valencia’s Palau de les Arts Reina Sofia. She appeared in Macbeth with the Staatsoper Berlin, sharing the stage with Placido Domingo, and made her Italian debut with Festival Puccini in Torre del Lago, Italy. In 2015, she made her debut at the Salzburg Easter Festival conducted by Christian Thielemann, singing the role of Santuzza in a new production
of Cavalleria Rusticana with Jonas Kaufmann, as well as the Verdi “Requiem”.

Ms. Monastyrska can be seen/heard on DVDs of Macbeth and Nabucco – both from the Royal Opera (Opus Arte), and in Sony Classics DVD of Cavalleria Rusticana from the 2015 Salzburg Easter Festival with the Staatskapelle Dresden.

Born in Kiev, Liudmyla Monastyrska was a principal soloist with the Ukraine National Opera for several years before expanding her international career. Ms. Monastyrska and her family make their home in Kiev.

“The main woman role, sung by Liudmyla Monastyrska, exhibits a big voice, of fine color, placed at the service of a tormented character… The best moment seemed to us the performance of what Verdi in the score significantly defines ‘melody’, or ‘Pace, mio Dio…’, characterized by a remarkable expressive intensity…”

“For this opening of the Festival, the cast is international and starry. In the Leonora role, the Ukrainian soprano Liudmyla Monastyrska (very popular and become a spokesperson for peace at this time of war in her homeland) offers a performance invested both vocally and dramatically. The voice is powerful and backed with a great emission… Accuracy is immutable and assured at both ends of its range. It flourishes musically in the less dramatic places, such as its elegantly nuanced and touching final aria…”

“There is a great axes of romantic melodrama with all their intensity: passion, revenge and despair, in a framework of violence and destruction… We cannot forget it today, as the Ukrainian soprano Liudmyla Monastyrska reminded us just by her presence. Great aria in the final act, with its desperate and repeated invocations to peace (Pace, pace…), beautifully sung, reminded us of the universal character of Verdi’s music, giving meaning to a work that is often not understood.”

“Scenically more credible is undoubtedly Leonora – Ukrainian Liudmyla Monastyrska, who conquers the Regio hall for a conscious immersion in the character, as well as for a luxuriant, flowing, warm, smooth voice in a well-extended and always homogeneous range. She is ready to deliver us a “Pace, pace…” from her intense, astral vagueness.”

“In Parma the role of Leonora was taken by the Kyiv-born soprano Liudmyla Monastyrska, and it was impossible not to be moved by a Ukrainian artist beseeching God for peace, as Leonora does in her famous act IV aria Pace, pace mio Dio. With lustrous tone, emotionally intense vibrato, and thrillingly climactic high notes, Monastyrska was a charismatic vocal presence, perhaps especially in her long duet with the Padre Guardiano, the guardian priest of a monastery, sung by the resonantly solemn Croatian basso Marko Mimica. The chorus of monks then assembled for the prayer La vergine degli angeli, with Monastyrska raptly taking up their melody. In no other opera does Verdi—not a particularly pious Catholic—give such expression to Marian devotion.”

“The evening was dedicated to the soprano Renata Tebaldi, born 100 years ago and who trained in Parma. Leonora was one of her great roles, putting plenty of pressure on Liudmyla Monastyrska, who headed a fine cast that wouldn’t go amiss on far starrier stages. Monastyrska’s powerful spinto was in strong evidence, rich in tone… Both her Act 1 aria Me pellegrina ed orfana and the more famous Pace, pace, mio Dio in the last act were nicely shaped. She reined in her large sound for a moving death scene.”

“Liudmyla Monastyrska, a soprano from Ukraine, was a Leonora of great presence, due to the volume of her voice and the skill she has in managing it, either with high notes thrown with force like arrows or for her charming mid-voices and pianissimo… All in all, excellent and much celebrated interpretation of hers.”

“Rome Opera assembled a cast for this run that likewise harks back to an earlier era of grand voices, especially the Tosca of Liudmyla Monastyrska, whose combination of sumptuous voice and mercurial temperament made for a memorable Tosca. At turns kittenish, provocative, outlandish, simple, devout and brave, the Ukrainian soprano has an ample, supple voice with gleaming, secure high notes that pierce through Puccini’s rich orchestrations with ease. However, it wasn’t her high notes alone that made ‘Vissi d’arte’ so special, but also the exceptional beauty of her middle range.”

“Liudmyla Monastyrska’s the line of singing, the timbre, and the good technique get me to draw a rough Tosca, of great vocal power, with a sharp well tempered and placed, impeccable. The lower register’s considerable projection made it heard without any problem throughout the hall, and gave us a Vissi d’arte of high level.”

“Verdi’s La forza del destino at the Royal Opera House in London surprises twice: with a grandiose soprano and with a great conductor who can do almost anything… her soprano can do just about anything. Very attractive mezzo vocce in the highest register… but sometimes Monastyrska easily drowns out the orchestra, the choir and the soloist colleagues. The voice does not get sharp at any moment, but floods like a wave through the hall. And, if the score requires endless legati, she does it effortlessly tone by tone – it seems like she does not have to breathe at all .

Because technically so well equipped, this magnificent singer can express all feelings, all emotional levels through her vocal: peace, despair, death, restlessness, eroticism, fear of death, tenderness. Leonora goes through all of them, and Monastyrska, who sings it all fascinatingly, can therefore tell the slow, out-of-the-way gliding of her heroine in an enthralling and reliving way.”

“Monastyrska’s Leonora is beautifully drawn both dramatically and vocally. Her passion, fear, and anguish are articulated with pitch perfect intensity and coloratura.”