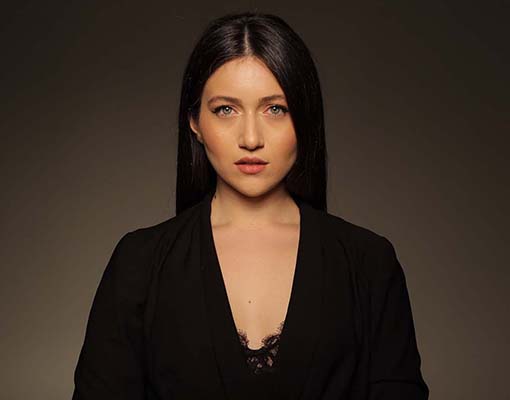 Armenian soprano Mané Galoyan, the 2021 Operalia Second Prize, Zarzuela Prize and the Rolex Audience Prize winner, whom the Houston Press exclaimed was “..radiant as dewy Gilda in her first throes of love, heavenly as a daughter disgraced, and positively stoic as martyr…she possesses a crystalline voice that cuts through any orchestral texture. She waltzed through Verdi’s dramatic coloratura without effort. She can float incandescent pianissimos then belt with Verdian thunder.”

In the 2022-2023 season, Ms. Galoyan will perform the title role in Luisa Miller with Oper Köln, Avis in The Wreckers with Houston Grand Opera, Donna Anna in Don Giovanni with the Atlanta Opera, Violetta in La traviata with Deutsche Oper Berlin and Seattle Opera, and Pamina in Die Zauberflöte with the Deutsche Oper Berlin. She will also perform Rachmaninoff’s The Bells with Gustavo Dudamel and the Los Angeles Philharmonic, Bruckner’s Te deum with the Netherlands Radio Orchestra, Taneyev’s cantata with the American Symphony Orchestra, to be later released as a recording, The Bells with Bard Festival, and present a recital with CulturArte de Puerto Rico.

As an Ensemble member with the Deutsche Oper Berlin in 2021-2022, Ms. Galoyan performed Pamina in Die Zauberflöte, Violetta in La Traviata, and Corinna in Il viaggio a Reims, among other roles. As a Guest, she made her debut with Dutch National Opera as Violetta, and performed the title role in Luisa Miller with the Glyndebourne Festival. She also stepped in for an ailing colleague to sing Adina for her debut with Paris Opéra in October, 2021, and sang Walter in La Wally with the Munich Radio Orchestra. In the 2020-2021 season, she debuted with Zürich Opernhaus as Adina in L’elisir d’amore and performed Garsenda in Francesca da Rimini with Deutsche Oper Berlin.

In previous seasons, Ms. Galoyan made her Metropolitan Opera debut as Prilepa/Chlöe in Pique Dame, conducted by Vasily Petrenko. A former Studio member of Houston Grand Opera, Ms. Galoyan has performed Violetta, Gilda in Rigoletto, and Adina. She has performed Violetta with the Glyndebourne Festival on tour, Gilda with Kentucky Opera, debuted with Hawaii Opera Theatre as the Countess in Le Nozze di Figaro.

Symphonic engagements included Rachmaninoff’s The Bells with James Gaffigan and The Dallas Symphony, as well as with Andrés Orozco-Estrada and the Houston Symphony. Ms. Galoyan also performed select Russian song repertoire with the Chamber Music Society of Lincoln Center at Alice Tully Hall, Mahler’s Symphony No. 2 with the Aspen Music Festival, Mahler’s Symphony No. 4 in G with the San Antonio Symphony and gave recitals at Balliol College at Oxford University, the Opera America Emerging Artists Recital series in New York and the Museum of Fine Arts, Houston. Other concert performances have included Pergolesi’s Stabat Mater, Schubert’s Mass in G and Mass in C, Vivaldi’s Gloria, and Haydn’s Lord Nelson Mass, all with the Armenian National Chamber Orchestra, as well as the Fauré Requiem with the Armenian National Philharmonic Orchestra.

Ms. Galoyan holds two degrees from the Yerevan State Komitas Conservatory in Armenia, where she was named the 2013 winner of the President of the Republic of Armenia Youth Prize. She is married to conductor Roberto Kalb.

“Galoyan, in her Glyndebourne debut, looked convincingly frail, and even though her singing delivered impressively secure coloratura and much graceful lyricism, she still gave the illusion that the effort was killing Violetta, the effect heightened by each act opening with her lying exhausted on a couch to one side of the stage. Galoyan was at her considerable best in her Act 2 duo with Giorgio Germont, a marvelously crafted retreat into despair that showed off the unsparing perceptiveness of her singing. Similarly, there were no emotional holds barred in Violetta’s hallucinatory death scene, sung with astounding control and as devastating as I’ve ever seen and heard it.”

“Mane Galoyan pierced the sky as the unforgettable forest bird who guides Siegfried.”

“And making her Glyndebourne debut as Violetta, Mané Galoyan is a real find, small in stature but with a compelling presence and able to express feelings as naturally as breathing. Whether juggling with determination, fragility and passion, she fulfils this complex role with complete assurance. It’s a voice of dazzling security and range, topped by a wonderfully projected mezzo voce that makes you hang onto every note. There’s a consistent clarity and evenness of tone, bringing a gratifying ease to her coloratura and finely-spun legato. The final moments when Violetta walks away from us and dies alone is achingly moving.”

“Galoyan’s Margaret was vocally effective, her lyric voice used with great sensitivity to convey a woman who can see the goodness that exists in a man whom others ridicule and demean. Galoyan’s character is the emotional driving force in the opera, and Floyd’s music, exquisitely performed by Galoyan, delineates a character as strong as she is sensitive.”

“In the transcendental adagio, the peaceful separation of the soul from the body could be sensed, with heaven entering at the start of the fourth movement exactly when soprano Mane Galoyan stepped onstage… Galoyan’s last-movement solo, titled “Life in Heaven,” sounded exactly like that, her voice pure and ardent as it intertwined with the celestial themes flowing from the orchestra.”

Congratulations to Mané Galoyan: Winner of Three Prizes at the 2021 Operalia Competition