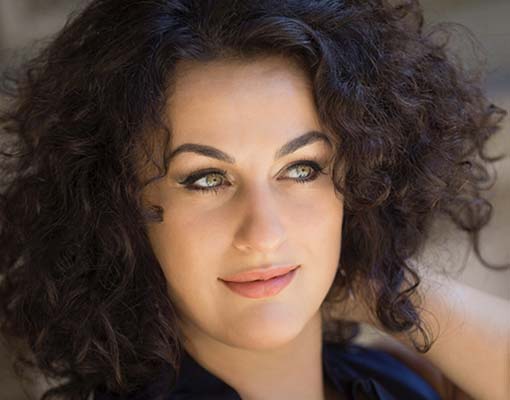 The Slovenian mezzo-soprano Monika Bohinec has been a member of the ensemble of the Vienna State Opera since the 2011/2012 season, where in the current 2019/2020 season she has roles such as Azucena (Verdi: Il trovatore), Jezibaba (Dvořák: Rusalka), Knusperhexe (Humperdinck: Hänsel and Gretel), Erda (Wagner: Das Rheingold and Siegfried) and Ulrica can be heard in the premiere production of Verdi’s Un Ballo in Maschera.

She also made her scenic debut as Ortrud (Wagner: Lohengrin) in Chemnitz and returned as Amneris (Verdi: Aida) to the Staatstheater am Gärtnerplatz in Munich.

Guest engagements in recent seasons have taken her to the Chemnitz Opera, where she was heard as Fricka (Wagner: Das Rheingold and Die Walküre).

At the Staatstheater Wiesbaden she was the marina in the premiere production of Mussorgsky’s Boris Godunov and returned in May 2019 as Ulrica (Verdi: Un Ballo in Maschera).

She made her debut as Klytämnestra (R. Strauss: Elektra) in April 2019 in Karlsruhe, where she also appeared as Sara di Nottingham (Donizetti: Roberto Devereux) in July. She has also made guest appearances at the Bavarian State Opera, the Saxon State Opera in Dresden, the Frankfurt Opera, the Salzburg Festival and the Mörbisch Festival, and was engaged to the Metropolitan Opera as Brangäne (Wagner: Tristan and Isolde), which she also performed sang in Australia.

While still studying at the Salzburg Mozarteum and at the University of Music and Performing Arts in Vienna with Univ. Prof. Claudia Visca, made her debut in 2006 as Clarissa (Prokofiev: Love for the Three Oranges) at the Slovenian State Opera in Ljubljana, to which she was a guest as Konchakowna (Borodin: Prince Igor), Suzuki (Puccini: Madama Butterfly) , Jezibaba (Dvořák: Rusalka) and returned in the title role of Bizets’ Carmen.

As a song and concert interpreter, she has already performed a recital as part of the Lied. Bühne cycle at the Wiener Musikverein. Furthermore, she was heard at the traditional concerts at the turn of the year as a soloist in Beethoven’s 9th Symphony at the Vienna Konzerthaus.

In the recent past, she sang as a soloist in Rossini’s Stabat Mater in Lille and in Schubert’s E minor fair in Slovenia. Performances on the concert stage have taken her to well-known venues such as the Philharmonie am Gasteig in Munich, the Berlin Philharmonie, the Concertgebouw Amsterdam, the Salle Pleyel in Paris, the Carnegie Hall in New York and the Philharmonie in St. Petersburg.

Monika Bohinec can be heard on the entire recording of Wagner’s Der Ring des Nibelungen under Christian Thielemann from the Vienna State Opera and on the recording of Tchaikovsky’s Iolanta alongside Anna Netrebko. DVD recordings of her appearances at the Salzburg Festival in Wagner’s Die Meistersinger von Nürnberg and Winter’s Das Labyrinth were released.

“The appearances of the witch by Monika Bohinec, whose mezzo grabs as deeply and inevitably as deeply as in the upper registers, seem intimidating, as it should be.”

“Monika Bohinec’s role debut as Azucena went according to plan; The fact that there was drama in the last act was due in no small part to her will to create: Azucena’s trauma and the fear of being abandoned by her son were relieved of her without restrictions, and this part also suits her vocally, she can particularly deep and draw the middle layer from the full.”

“The most intense is intended for Kassandra: Monika Bohinec succeeded brilliantly: without false emphasis she conveyed doom visions through dark flowing melody.”