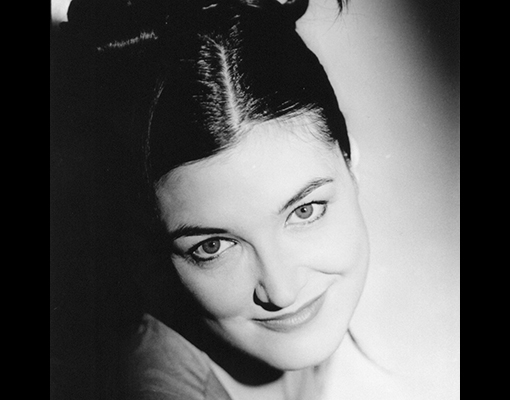 British-Italian mezzo Sara Fulgoni, ‘the fiercest Fricka…in the last 50 years’ (Michael Tanner, The Spectator) has performed at the major opera and concert venues of the world in a huge variety of repertoire, all to critical acclaim. The full, rich and lustrous quality of her voice, as well as her remarkable stage presence, have distinguished her operatic performances.

Named ‘the Carmen of the decade’ by the Daily Telegraph, Sara Fulgoni has sung much of the great mezzo repertoire. She has sung the role for Santa Fe Opera, Toulouse (under Michel Plasson), the Palau de les Arts Valencia (under Lorin Maazel), Grand Théâtre de Genève, Welsh National Opera, English National Opera and at the Beijing Music Festival, where she became the first western interpreter of the role to be presented in the capital of China since the Cultural Revolution.

Sara created the title role in the world premiere of Tobias Picker’s opera Thérèse Raquin at Dallas Opera (also recorded for Chandos) and Nicholas Lens’ Shellshock, A Requiem of War at La Monnaie in Brussels.  The performance marked 100 years since the 1918 armistice, and was broadcasted live on Arte TV. She has also appeared in recital at Haileybury where she gave the premiere performance of a new song cycle by Ben Parry.

Other highlights have included Hansel Hansel and Gretel and Amando Le Grand Macabre with San Francisco Opera; the title role in The Rape Of Lucretia for Vara Radio in Amsterdam, De Vlaamse Opera and for Radio France; Diana La Calisto under Rene Jacobs in Montpellier, Lyon and Salzburg; Marguerite La Damnation De Faust with the Brooklyn Academy of Music in New York; Orfeo Orfeo ed Euridice in La Coruna and Valladolid; Beatrice Beatrice Et Benedict at De Nederlandse Opera and with the Welsh National Opera.

A committed concert artist, Sara has worked with Vladimir Ashkenazy, Riccardo Chailly, the late Richard Hickox, Kurt Masur, Riccardo Muti, Josep Pons, Jukka-Pekka Sarastre and the late Giuseppe Sinopoli. She has sung both Mahler Symphony No. 8 and Urlicht from Das Knaben Wunderhorn with the Royal Concertebouw Orchestra under Riccardo Chailly, both of which were also recorded by Decca.  She performed John Adams’ El Nino in concert with the Flanders Philharmonic Orchestra.  In recital Sara has appeared at the Concertgebouw, Wigmore Hall, the Montreux-Vevey Festival and in the Chatelet’s Midis-Musicaux series.

Her many recordings include the Cherubini Mass In D Minor with Riccardo Muti at La Scala for EMI, Suor Angelica for EMI under Antonio Pappano, Elijah for Decca under Paul Daniel after performances at the Edinburgh Festival, Handel’s Dixit Dominus under Marc Minkowski for Archiv, Ned Rorem’s The Santa Fe Songs with Chamber Domaine for Black Box and Welcome To The Voice with Sting for DG.  She also took part in the acclaimed television series entitled ‘The Genius of Beethoven’ for the BBC.

A graduate of the Royal Northern College of Music, where she was supported by the Peter Moores Foundation, Sara Fulgoni is the recipient of numerous awards including second prize in the Kathleen Ferrier Awards in 1993.

“For at the heart of Pountney’s interpretation is the fine mezzo Sara Fulgoni as a fraudulent sorceress Ulrica, here in cahoots with Riccardo’s page Oscar. If this Ulrica were alive today, she’d probably be running her own doom-mongering TV channel.”

“Sara Fulgoni’s grandly-toned Ulrica – the fortune teller who subsequently announces Riccardo’s unalterable fate – is already a presence, as she will be throughout the show rather than in the single scene envisaged by the composer”

“The magnificent Sara Fulgoni brings a Kundry-like physicality to the liminal, shadowy role of Marfa…sounding completely at ease in the lower register which Mussorgsky mercilessly exploits, she’s mesmerising in the long incantation-scene…she’s as compelling in stillness and silence as when pouring forth imprecations and invocations.”

“…the fiercest Fricka I have seen in the last 50 years, Sara Fulgoni, whose demolition of the god’s view that he wasn’t responsible for how his children behaved achieved cosmic force.”

“Sara Fulgoni is very incisive, present and well-defined, with a technically good voice and beautiful colour”

“There was fine work, too, from Sara Fulgoni, as the gypsy Ulrica, always around to lend her predictions a nudge in the right direction”

“Sara Fulgoni’s Ulrica, a stirring take on the fortune teller, who communicates with the devil is another brief, yet brilliant handling of the character.”

“…presided over by Sara Fulgoni’s majestic Ulrica – an almost automatic presence in every scene, incidentally… Fulgoni’s Ulrica was drawn on a grand vocal scale”

“Sara Fulgoni’s Quickly is much more than the usual go-between. In fact she saucily ventures into Falstaff’s bed.”

“A mother (a magnificent Sara Fulgoni) sings of her pain, building to a harrowing scream amplified by orchestra and offstage chorus, and sending us tumbling into terror.”

“the tormented despair of Sara Fulgoni’s The Mother…the Mother nurses her grief in stillness. It’s as focused as desperation itself.”

“While the archetypal lamenting mother, Sara Fulgoni – vividly reflecting extremes of anguish – was a presence almost throughout”

“The Prisoner had opened with a fine impassioned account of the Prologue by Sara Fulgoni – singing about as well as I have ever heard her.”

“Sara Fulgoni’s Zita throwing themselves into their parts with such gusto that they almost seem to spin off the screen.”

“Luigi Dallapiccola’s one-act The Prisoner from 1949 opened with Sara Fulgoni grieving powerfully over her son’s imprisonment. Beautifully accompanied by a Mahler-sized BBC National Orchestra of Wales (not the WNO home team on this occasion) under Lothar Koenigs, this was one of the high points of the evening, with the lightly written score creating subtle and emotionally intense pairings.”

“A mother (a magnificent Sara Fulgoni) sings of her pain, building to a harrowing scream amplified by orchestra and offstage chorus, and sending us tumbling into terror.”

“…the tormented despair of Sara Fulgoni’s The Mother…the Mother nurses her grief in stillness. It’s as focused as desperation itself.”

“Sara Fulgoni as The Mother, gets an impassioned scene of mania, visiting her son in the prison. Fulgoni makes this opening moment, with her blockbuster high register, petrified by a vision of King Phillip of Spain, transforming into a symbol of death.”

“Sara Fulgoni works up some suitably histrionic outbursts as Marfa, the Mystic Meg of 17th-century Muscovy.”

“the women were led by Sara Fulgoni, magnificent as Marfa”

“the sinuous voice of Sara Fulgoni showing excellent vocal quality over a wide range of registers.”

“…surely Sara Fulgoni’s Fricka must be the most indignant portrayal there has ever been…As hinted at above, Sara Fulgoni’s resplendently sung Fricka was total convincing in its dramatic detail and her long ‘conversation’ with Wotan never seemed half as long as it sometimes can.”

“Sara Fulgoni more vivid still as a blazing Fricka, who sets about Wotan in a memorable encounter over the breakfast table.”

” In a quite superb portrayal, Sara Fulgoni, done up in Lincoln green like the formidable W.I. Monster Fricka might have been, relishes the compelling narrowness  of this unlovely character.”

Sara Fulgoni was implacable and agonised as Brangäne.”

“Sara Fulgoni was an outstanding Brangane”

“Sara Fulgoni seemed to have the technique and security needed for Isolde and the radiance of her top notes was what was sometimes lacking from Rachel Nicholls. Ms Fulgoni also compellingly conveyed the weight of her character’s sense of responsibility for the lovers’ sufferings.”

“Welcoming the presence of Sara Fulgoni that fits well into the company in the role of the nurse Beroe, and take home a great scene with Elgr / Dionysus, begging him to save Pentheus (Spare him, Dionysus)”

“A ravishing outing for a rare Schoenberg… featuring mezzo Sara Fulgoni. Her rich tone, especially in the chest range, offered an engagingly different aural perspective, the words often more sung than spoken, the dark timbre of her voice was perfect in Nacht and its expressionistic gloom. And after its rapport with Alice Neary’s cello, the gentle rocking of the boat taking Pierrot back to his native Bergamo had an understated beauty, with the work as a whole realising both intimacy and a remarkable intensity”

“Sara Fulgoni’s luxurious performance of Dalila, fatal seduction oozing out of her beautiful mezzo. Her singing caressed the life out of Samson in ‘Mon coeur s’ouvre à ta voix’, and her portrayal as a corrupt consort… was sharply directed.”

“Sara Fulgoni sounds darkly seductive and at the same time possesses the regal air of the film star she is meant to be. She builds up the tension and expectations very well with long phrasing, before pulling out all the lyrical stops in the famous aria and subsequent duet ‘Mon coeur s’ouvre a ta voix’.”

“…partnered as Dalila by mezzo Sara Fulgoni sounding its notes with confidence, warmth and a genuinely seductive quality.”

“Much better the mezzo-soprano Sara Fulgoni, the warm voice and technically solid, stands out for its expressiveness and the acting abilities especially in the singing of the mother, one of the most beautiful and intense of the whole work”

“Highly expressive, with an excellent technical mastery, was the mezzo soprano Sara Fulgoni”

“Sara Fulgoni has a remarkable sense of drama and plays her character emotionally and vehemently, passionately too. She has the right tone of voice for Judit, the drama too.”

“Fulgoni’s Beatrice is robustly characterised and her voice is as well-nourished as her wit. And we certainly feel the heat of that strange fire within her as she rises to the demands of both pride and ardour in her great Act II scene.”

“Sara Fulgoni as Polina seized her moment in her one atmospheric aria and produced gorgeous, effortless low mezzo sound – this was a lollipop in the score if ever there was one.”

“Sara Fulgoni was in fine voice as Béatrice, especially impressive in ‘Dieu! Que viens-je de’entendre’, a piece in which ones feels the shadow of another of Berlioz’s heroes Gluck.”

“To start with Brangaene, I do not think I have ever heard Sara Fulgoni act and sing anything better. Expressive in face and voice, she produced a gorgeously rich mezzo that rode effortlessly over the orchestra, especially in the decisive lower register.”