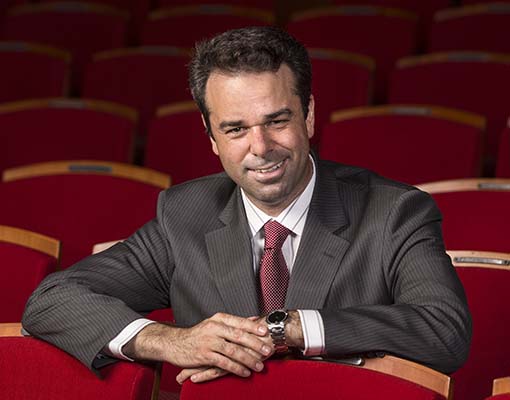 General and Artistic Director of The Atlanta Opera since 2013, Israeli born Tomer Zvulun is also one of leading stage director of his generation, earning consistent praise for his creative vision and innovative interpretations.  His work has been presented by prestigious opera houses in Europe, South and Central America, Israel and the US, including The Metropolitan Opera, Washington National Opera, Seattle Opera, Houston Grand Opera, Dallas, San Diego, Boston, Pittsburgh, Minnesota, Montreal, Buenos Aires, Israeli Opera, and the festivals of Wexford, Glimmerglass and Wolf Trap, as well as leading educational institutes and universities such as The Juilliard School, Indiana University, Boston University.

His upcoming projects includes a new co production of The (R)evolution of Steve Jobs between the opera companies of Austin, Atlanta and Kansas City, a new Rheingold for Atlanta,  Rigoletto in Dallas and Atlanta and a revival of his acclaimed production Eugene Onegin in Minnesota. He is also working on developing Sensorium Ex, a world premiere opera based on a story about artificial intelligence to be premiered in Atlanta and the Prototype Festival in NYC.

Tomer Zvulun was born and raised in Israel, attended the open University in Tel Aviv and Harvard Business School and makes his home in Atlanta.

“Wexford commissioned a new production by Israeli director Tomer Zvulun, whose work is excellent. He narrates the story well, starting with the presentation of the characters in the prologue. The trenches are offered vertically in three heights which convey perfectly the difficulty of living in that small space… The stage direction is meticulous in every detail, reflecting Mr. Zvulun’s great knowledge of opera. Strong emotion is present throughout the opera, and the stage direction was an excellent vehicle for it.”

“A powerful and attractive new production defined by moments of shimmery, cinematic fantasy mixed with genuine pathos that are pure Puccini all the way through. In the hands of the fine cast and under the direction of the company’s new General and Artistic Director Tomer Zvulun, this is opera that’s easy to love.”