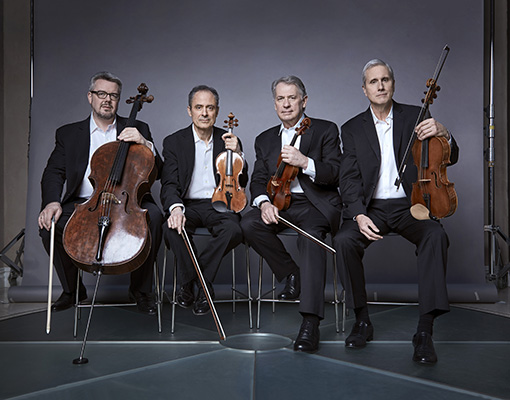 The Emerson String Quartet will have its final season of concerts in 2022-23, disbanding after more than four decades as one of the world’s premier chamber music ensembles. “With musicians like this,” wrote a reviewer for The Times (London), “there must be some hope for humanity.” The Quartet has made more than 30 acclaimed recordings, and has been honored with nine GRAMMYs® (including two for Best Classical Album), three Gramophone Awards, the Avery Fisher Prize, and Musical America’s “Ensemble of the Year” award. As part of their larger mission to keep the string quartet form alive and relevant, they have commissioned and premiered works from some of today’s most esteemed composers, and have partnered in performance with leading soloists such as Renée Fleming, Barbara Hannigan, Evgeny Kissin, Emanuel Ax, Mstislav Rostropovich, and Yefim Bronfman, James Galway, Edgar Meyer, Menahem Pressler, Leon Fleisher, André Previn, and Isaac Stern, to name a few.

In its final season, the Quartet will give farewell performances across North America and Europe, including San Francisco’s Herbst Theater, Chicago’s Orchestra Hall, Toronto’s Royal Conservatory of Music, Vienna’s Musikverein, Prague’s Rudolfinum, London’s Southbank Centre for the completion of its acclaimed cycle of Shostakovich quartets, and more, before coming home to New York City for its final series there with the Chamber Music Society of Lincoln Center, in a trio of programs entitled Emerson Dimensions where the Quartet will perform some of its most storied repertoire. They will give several performances of André Previn’s Penelope with Renée Fleming and Uma Thurman, including at the Los Angeles Opera, and they will appear at Carnegie Hall with Evgeny Kissin to perform the Dvořák Quintet as part of a benefit concert for the Andrei Sakharov Foundation. The final performance as the Emerson String Quartet will take place in October 2023 in New York City, and will be filmed for a planned documentary by filmmaker Tristan Cook.

The Quartet’s extensive discography includes the complete string quartets of Beethoven, Mendelssohn, Brahms, Bartók, Webern, and Shostakovich, as well as multi-CD sets of the major works of Haydn, Mozart, Schubert, and Dvořák. In its final season, the Quartet will record Schoenberg’s Second Quartet with Barbara Hannigan for release in 2023, with the sessions video documented by Mathieu Amalric for a short film. Deutsche Grammophon will also reissue its box set of the Emerson Complete Recordings on the label, with two new additions. In October 2020, the group released a recording of Schumann’s three string quartets for the Pentatone label. In the preceding year, the Quartet joined forces with GRAMMY®-winning pianist Evgeny Kissin to release a collaborative album for Deutsche Grammophon, recorded live at a sold-out Carnegie Hall concert in 2018.

Formed in 1976 and based in New York City, the Emerson String Quartet was one of the first quartets whose violinists alternate in the first violin position. The Quartet, which takes its name from the American poet and philosopher Ralph Waldo Emerson, balances busy performing careers with a commitment to teaching, and serves as Quartet-in-Residence at Stony Brook University.  In 2013, cellist Paul Watkins—a distinguished soloist, award-wining conductor, and devoted chamber musician—joined the original members of the Quartet to form today’s group.

In the spring of 2016, the State University of New York awarded full-time Stony Brook faculty members Philip Setzer and Lawrence Dutton the status of Distinguished Professor, and conferred the title of Honorary Distinguished Professor on part-time faculty members Eugene Drucker and Paul Watkins. The Quartet’s members also hold honorary doctorates from Middlebury College, the College of Wooster, Bard College, and the University of Hartford.  In January of 2015, the Quartet received the Richard J. Bogomolny National Service Award, Chamber Music America’s highest honor, in recognition of its significant and lasting contribution to the chamber music field.

“The Emerson performances represented an extraordinary fusion of experience and authority  with audacity and freshness.” — The Boston Globe

“… with musicians like this there must be some hope for humanity.” — The Times (London)

AUGUST 2022 – PLEASE DO NOT ALTER THIS BIOGRAPHY WITHOUT PRIOR APPROVAL

Emerson String Quartet Announces Retirement at the End of Summer 2023

The Emerson String Quartet, the incomparable American ensemble, will retire at the end of summer 2023, forty-seven remarkable years after it was initially formed at Juilliard in 1976.  All four members of the Quartet – Eugene Drucker, Philip Setzer, Lawrence Dutton...

“Let’s make one thing perfectly clear: The “old” Emerson String Quartet never phoned one in. But this new group — Mr. Watkins alongside the violinists Eugene Drucker and Philip Setzer, and the violist Lawrence Dutton — complemented their customary power, finesse and unanimity with a fresh, palpable vigor at Tully, and it was electrifying.”

“This performance was everything that a string quartet should be – an intelligent conversation between four distinct characters.”

“The ensemble conveyed the richness of tonal variety and the large structural arcs of this composition with fascinating perfection. (…) A great ensemble lived up to its reputation and impressed with technical brilliance and interpretative power of persuasion.”

“The Emerson String Quartet from the USA provided the House of Music on Wednesday evening with a moment of musical glory. (…) From the first few bars, the Emersons filled the packed hall with sheer magic. What a stunning sound. Four highly qualified musicians blended their unheard-of individual skill into one atmospheric whole.”

“From the start the most enduring attribute has been the sheer technical excellence of the quartet’s playing. For precision and unanimity it is second to none… [They] performed with every ounce of the taut, incisive grip that is the mark of the Emerson String Quartet at its best … so perfectly in tune that it was almost uncanny. Forty years on, the Emerson String Quartet remains at the top of its game.”

“Emerson String Quartet, with its “new-ish” cellist, Paul Watkins, … was in a league apart. The sheer quality of ensemble playing from the Emersons, with Watkins seamlessly integrated into the group, while retaining his characterful playing style and profile, was almost miraculous to hear… It’s almost as though the group liberates the truth of the music from the score.”

“Let’s make one thing perfectly clear: The “old” Emerson String Quartet never phoned one in. But this new group — Mr. Watkins alongside the violinists Eugene Drucker and Philip Setzer, and the violist Lawrence Dutton — complemented their customary power, finesse and unanimity with a fresh, palpable vigor at Tully, and it was electrifying.”

“This performance was everything that a string quartet should be – an intelligent conversation between four distinct characters.” 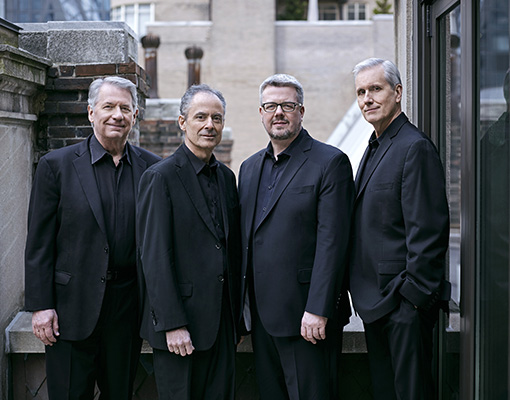 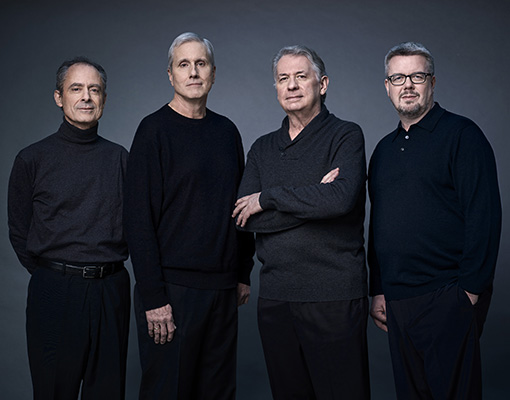 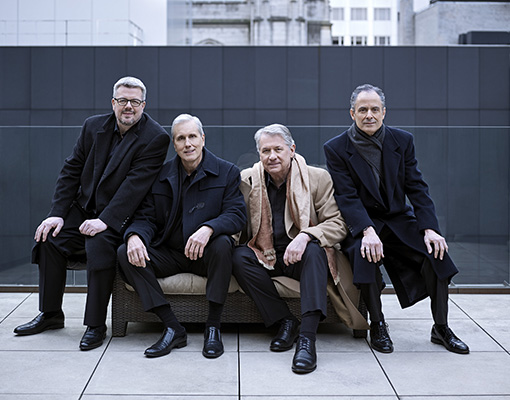 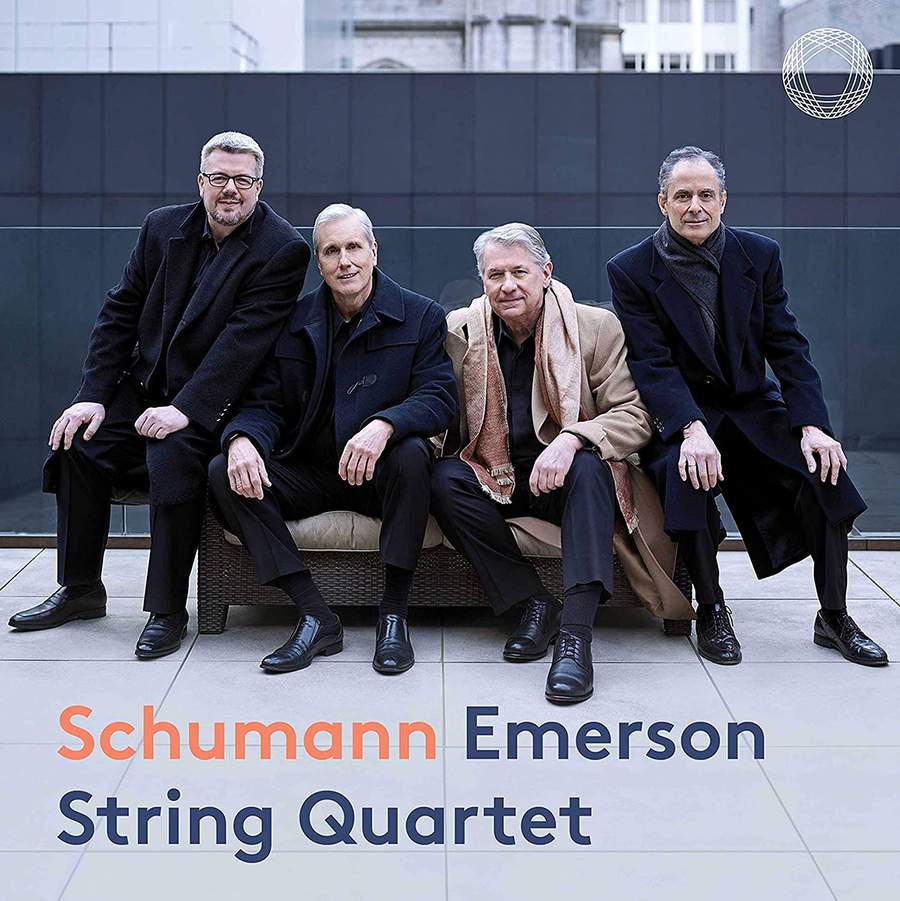