Zakir Hussain is today appreciated both in the field of percussion and in the music world at large as an international phenomenon and one of the greatest musicians of our time. A classical tabla virtuoso of the highest order, his consistently brilliant and exciting performances have established him as a national treasure in his own country, India, and as one of India’s reigning cultural ambassadors. Along with his legendary father and teacher, Ustad Allarakha, he has elevated the status of his instrument both in India and around the world. His playing is marked by uncanny intuition and masterful improvisational dexterity, founded in formidable knowledge and study.

The recipient of countless honors, Zakir has received the titles of Padma Bhushan, in 2002, and Padma Shri, in 1988, becoming the youngest percussionist to be awarded these, given to civilians of merit, by the Indian government. In 1990, he was awarded the Indo-American Award in recognition for his outstanding cultural contribution to USA-India relations. In April 1991, he was presented with the Sangeet Natak Akademi Award by the President of India, making him one of the youngest musicians to receive this recognition from India’s governing cultural institute. In 2007, readers’ polls from both Modern Drummer and Drum! magazines named him Best World Music and Best Worldbeat Drummer respectively. On February 8, 2009, Zakir received a Grammy in the Best Contemporary World Music category for Global Drum Project, his group with Mickey Hart, Giovanni Hidalgo and Sikiru Adepoju. Also, in 2009, Zakir was named an Officer in the Order of Arts and Letters by France’s Ministry of Culture and Communication for his extraordinary artistic and cultural contribution. The Downbeat Critics’ Poll named him Best Percussionist in 2012.

A child prodigy, Zakir was touring by the age of twelve. He came to the United States in 1970, performing his first USA concert at the Fillmore East in New York City with Pandit Ravi Shankar, embarking on an illustrious international career. A prolific composer and recording artist, Zakir has received widespread recognition for his many ensembles and collaborations. In 1987, his first solo release, Making Music, was acclaimed as “one of the most inspired East-West fusion albums ever recorded.” In 1992, Planet Drum, an album co-created and produced by Zakir and Mickey Hart, became the first recording to win a Grammy in the Best World Music category, the Downbeat Critics’ Poll for Best World Beat Album and the NARM Indie Best Seller Award for World Music Recording.

Zakir received the distinct honor of co-composing the opening music for the Summer Olympics in Atlanta, 1996. He was commissioned to compose music for Alonzo King’s Lines Ballet (for which he received an Isadora Duncan Award), and to compose an original work for the San Francisco Jazz Festival, both in 1998. He has received numerous grants, including participation in the Meet the Composer programs funded by the Pew Memorial Trust. In 2000, Zakir worked again with choreographer Alonzo King, this time composing music for The Alvin Ailey American Dance Theater. In 2002, his commissioned work for choreographer Mark Morris’ “Kolam” premiered as part of YoYo Ma’s “Silk Road Project” with YoYo Ma and Zakir performing Zakir’s composition live for the performance. In September 2006, Triple Concerto for Banjo, Bass and Tabla, a piece co-composed by Zakir, Edgar Meyer and Bela Fleck, was performed by them with the Nashville Symphony at the gala opening of the Schermerhorn Symphony Hall in Nashville. In January, 2009, it was re-created with the Detroit Symphony, again under the baton of Leonard Slatkin. This performance and new original works composed by Zakir, Edgar and Bela, was released as the Grammy-nominated The Melody of Rhythm in 2009. Zakir’s second concerto, Concerto for Four Soloists, a special commission for the National Symphony Orchestra, was performed at Kennedy Center in March, 2011, conducted by Christoph Eschenbach. His third concerto, the first-ever tabla concerto, will be premiered in September, 2015, by the Symphony Orchestra of India, was premiered in Europe in January 2016 and will premiere in the United States in April, 2017, by the National Symphony Orchestra.

Zakir reunited with Alonzo King in 2007, for Lines Ballet’s 25th anniversary celebration, creating acclaimed music for King’s Rasa, and was commissioned to score King’s Scheherazade which premiered in Monte Carlo in December 2009, garnering another Isadora Duncan Award. In 2007, the government of India chose Zakir to compose an anthem to celebrate India’s 60th year of independence. The song, “Jai Hind”, has been recorded by an array of India’s finest classical vocalists and pop singers.

Zakir has scored for many films, including Merchant-Ivory’s Heat and Dust (in which he also co-starred), In Custody and Mystic Masseur, Bertolucci’s Little Buddha, Vanaprastham (The Last Dance), Saaz, Everybody Says I’m Fine, and Mr. And Mrs. Iyer.

Zakir is the recipient of the 1999 National Heritage Fellowship, the United States’ most prestigious honor for a master in the traditional arts, presented by First Lady Hillary Rodham Clinton at the United States Senate on September 28, 1999. In 2005, he was named an Old Dominion Fellow by the Humanities Council at Princeton University, where he resided for the 2005-2006 autumn semester as full professor in the music department, teaching a survey course in Indian classical music and dance. In the spring of 2007, this course was taught again by Zakir, this time at Stanford University. Zakir’s yearly tabla workshop in Marin County, conducted for the past twenty years, draws hundreds of serious students and performers. In the spring of 2015, he was in residence at UC Berkeley as Regents Lecturer.

In 1992, Zakir founded Moment! Records which features original collaborations in the field of contemporary world music and live concert performances by great masters of the classical music of India. The label presents live recordings of great masters of the classical music of both North and South India, world music and a Masters of Percussion series. Moment Records’ 2006 release, Golden Strings of the Sarode with Aashish Khan and Zakir Hussain, was nominated for a Grammy in the Best Traditional World Music category for that year. Moment Records’ recent DVD release, Zakir Hussain: The SF Jazz Sessions, featuring a host of Zakir’s world-class collaborators, has been critically acclaimed.

In 2015, he was voted “Best Percussionist” by the Downbeat Critics’ Poll and by Modern Drummer’s Readers’ Poll.

“If there is such a thing as a tabla superstar, Indian virtuoso Zakir Hussain is it…”

“This is music in which the line between artistry and bravado is as thin as an uncooked pappadam. It shrank even further with displays of percussive virtuosity being the concert’s raison d’etre.” 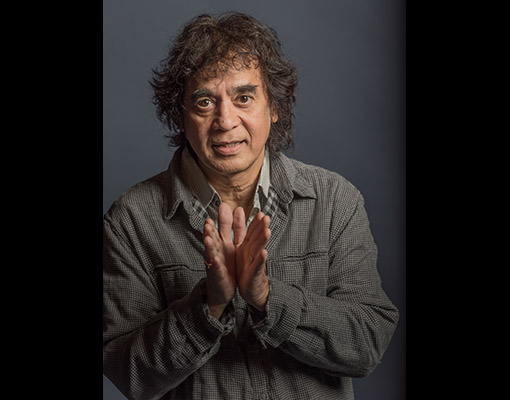