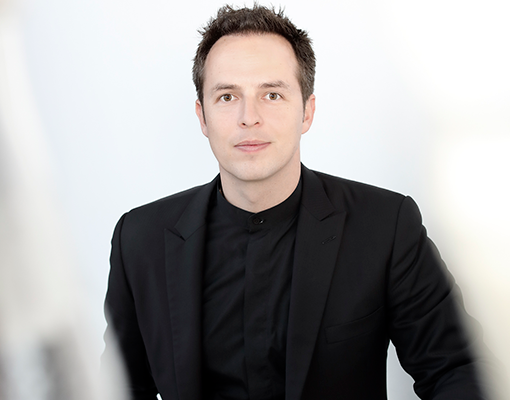 Case Scaglione is currently in his fifth season as a Chief Conductor of the Württembergisches Kammerorchester Heilbronn in Germany and in his fourth season as a Music Director of Orchestre national d’Île de France. He has previously served as Associate Conductor with the New York Philharmonic and as Music Director of the Young Musicians Foundation Debut Orchestra of Los Angeles. Case was the driving force behind the artistic growth and diversification of the organisation, founding their educational outreach initiative ‘360° Music’.

During 2022/23 season, as was the case with the previous ones, Case and Württembergisches Kammerorchester Heilbronn continue to appear regularly at Stuttgart’s Liederhalle, Kloster Schöntal, Ludwigsburg, Queen Elisabeth’s Hall in Antwerp, Munich’s Prinzregententheater, Forum am Schlosspark in Ludwigsburg. Composers of classical and early Romantic periods,  as well as 20th Century and contemporary ones feature prominently throughout Case’s 2022/23 season with the Württembergisches Kammerorchester Heilbronn.

Case enjoys close relationships with many of the world’s leading soloists, including Joshua Bell, Yulianna Avdeeva, Jean-Efflam Bavouzet, Behzod Abduraimov and Khatia Buniatishvili. Case has been mentored by some of the most prominent conductors on the world stage today, including Alan Gilbert, Jaap van Zweden and David Zinman. 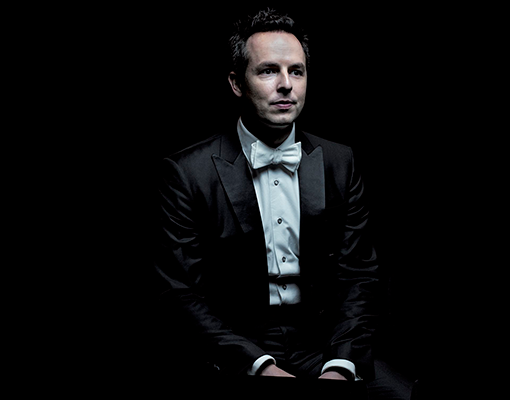 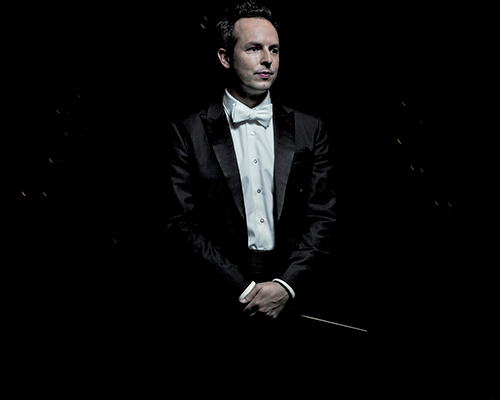 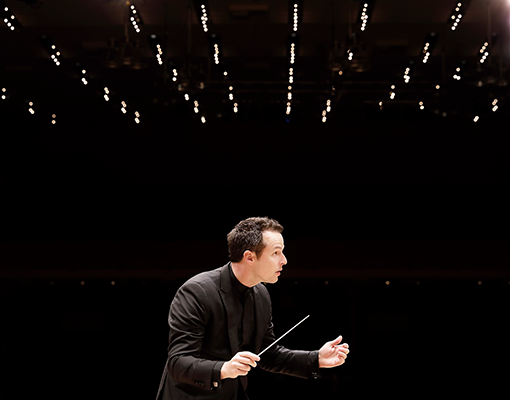 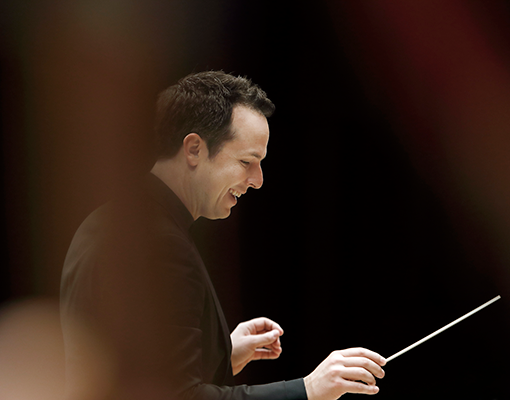 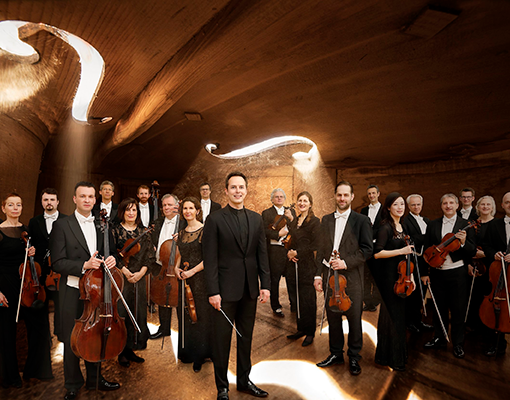 Congratulations to the winners of the 2022 International Classical Music Awards (ICMA). The honourees were celebrated during a gala concert streamed live from the Philharmonie Luxembourg Thursday 21 April. The prestigious awards are selected by an international jury...

“Succeeding Semyon Bychkov and for his debut at the Paris Opera, Case Scaglione, music director of the Orchestre national d’Île-de-France, visibly convinces the audience with an attentive musical direction, giving pride of place to expressiveness and feeling.”

“The credit goes to Scaglione, an unstoppable guide who imposes a flawless discipline on this reading of Ravel’s Bolero.”

“The firmness of the soloists’ interventions in the Rhapsodie espagnole, showed notable diversity of moods, stemming directly from Scaglione’s sensitivity and stylistic ease, qualities already noted on other occasions.”

“Energised by a probing and teasing spontaneity that readily mined both Classical or Romantic genres, Case Scaglione and Federico Colli generated a confidently shared profile and personality pulling the music out of the air with improvisational ease.”

The ability of Case Scaglione’s direction to take care of the nuances of dynamics, clarity and relationships of the different voices of the orchestra, from the desks to the instrumentalists (all magnificent), is verified in the Prelude of “Tristan und Isolde”.  Although it is given to us here to hear only extracts from the works, we feel that the inspiration of the conductor is nourished by a noble general formal vision of these… We will therefore be impatiently awaiting the reopening of the concert halls in order to follow ONDIF’s exciting adventure with Case Scaglione – a passion and an ambition that can be clearly understood here.

“Scaglione unfolds the great architecture of the piece with breadth and admirable clarity. His affinities with the Wagnerian universe are illustrated once again here and make us all the more impatient to see him again soon at the Massy Opera (November 12 and 14).”

“The poetic force of the Prelude to Lohengrin is made all the more striking by the conductor’s lack of narcissism. He knows how to make the music speak, to brighten up the timbres without ever reflecting on the result obtained. The remark is equally valid for Also Sprach Zarathustra, the listener’s attention never wavers for a moment, so much so that the maestro strives to bring the musical text to life from within.”

“Case Scaglione and the RTVE Symphony Orchestra came together in a magnificent performance, which was full of contrast and intensity. Case Scaglione gave the orchestra the true prominence it deserved with his outstanding conducting. His interpretation of this symphony fuelled the imagination of his listeners and was applauded by the audience.”

Follow this Conductor … Scaglione is truly a deeply musical musician, which is no redundancy – A Musician’s Musician, as the Anglo-Saxons say.

Case Scaglione is relaxed, likeable, unpretentious, reflective, clear-cut – and is highly inspiring and demanding of his musicians. With Schönberg’s Verklärte nacht one could close their eyes for half an hour and dive into Vienna in 1900.

“If the OP seeks its leader, another formation has found it: it was the first time that we heard the Orchestre National d’Île-de-France (Ondif) with its new musical director, Case Scaglione. Listening to a programme of selected Wagner songs with two solid-sounding singers (Michelle DeYoung and Simon O’Neill), reminiscent of the olden symphonic associations, the least we can say is that we were favourably impressed. The 37-year-old American chef has a clear and fluid body language, never ostentatious, and keener to help the orchestra and the singers rather than to put himself in the spotlight. The musicians and him are only at the beginning, but the way in which he has modelled a balanced, warm and homogeneous sound in the strings, whilst paying special attention to the legato and progressions, is already more than promising. The winds did not always show the same cohesion throughout the evening, but we still came out invigorated from this exciting concert, and made the promise of not waiting too long before going back to hear the Ondif in this form again.”

“It is better to have the score in your head than the head in the score, said a famous chef.  Scaglione has Sibelius in the head, as much as in the heart, and directs the entire program from memory.  Sensation of space, interior profusion: the dramatic progression that the young maestro prints to the initial movement of the 5th Symphony, placed in the first part of the evening, testifies to a full mastery of his subject and will reveal himself in the image of the  together of an execution which knows how to take care of the detail (magnificent Andante mosso, almost Allegretto), layering the sound plans and making feel the irrepressible push of force leading to the majestic choir of the last episode. The final agreements could no doubt have been ballasted with even more cosmic energy, but, as it stands, the result is already admiring…  In conclusion, Symphony n ° 7, a work of a single flow, underlines the organic understanding that the young maestro has of a brilliant score which he masters the sequence of the various sections with as much naturalness as it arouses – and  amazes – the stamps.”

“The epic work of Ludwig van Beethoven, composed in 1803 (the birth year of Berlioz), was interpreted with panache and brilliance by the remarkable Orchestre national d’Ile-de-France, masterfully and subtly directed by the young 37-year-old chief conductor, Case Scaglione.”

“Musical director since September 2019 of the National Orchestra of Ile-de-France, the American conductor Case Scaglione reveals his lyrical direction here.  From the opening fully mastered and rooted in fervor, Case Scaglione leads his orchestra with a certain authority that never interferes with his admittedly dramatic vision but just as keen to explore all the resources of this fascinating score.  It makes every note vibrate, every moment.  He never comes to cover the vocal performances, but accompanies them with care and with a constant concern for detail and the result.  The National Orchestra of Ile-de-France is committed without restriction and the various desks, including the brass duly requested, are adorned with very rich colors.” (OLYRIX, NOVEMBER 2021)

“Case Scaglione conducts his WKO musicians mostly by heart, with small, smooth but clear gestures, full of energy and with impulse”(HEILBRONNER STIMME, SEPTEMBER 2018)

“For Case Scaglione, it is the second season as chief conductor and he has shown with this concert that the time of scanning, and testing and trying is over. This Mozart Interpretation makes cleat that Scaglione has arrived, that he knows where the strengths of the musicians are and where he must intervene as leader”

It’s great news, really: Young American conductor Case Scaglione made his San Diego debut, impressing with his easy rapport with the San Diego Symphony and the engaging performances he oversaw. […] It’s probably for the best that Scaglione substituted Wagner’s ​“Overture to Tannhäuser.” With clear, broad podium gestures, Scaglione shaped the noble opening, the ecstatic central section, and the triumphant processional that concludes the overture.

” The young maestro on the podium, Case Scaglione, was flexible and empathetic with the Württembergisches Kammerorchester. The ensemble from Heilbronn, which sees itself as an “international sound manufactory” and travels a lot, was then able to show its own profile in Beethoven’s “Pastorale”. Chief Conductor Scaglione, Associate Conductor of the New York Philharmonic Orchestra, unites American looseness with a highly sensitive musicality. Although he bought the intimacy of his interpretation of Beethoven with extreme pianissimi and much ritardandi, he brought the sound culture of the orchestra to best advantage. ”